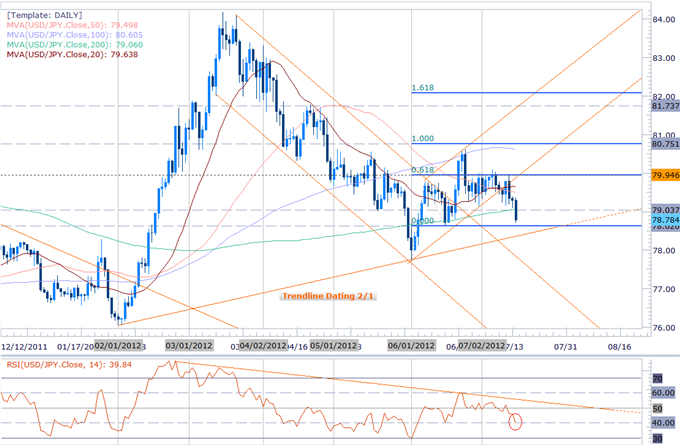 The Japanese yen is the top performer against a weaker dollar at the close of European trade with the USDJPY off by 0.57% on the session. The greenback was well supported ahead of the US open until a weaker-than-expected print on June retail sales saw the reserve currency pare early gains with risk aversion flows supporting the yen. The pair now eyes daily support at the June 15th low at 78.62 backed by trendline support, currently around 78.35. Initial daily topside resistance is eyed at the 61.8% Fibonacci extension taken from the June 1st and 15th troughs just shy of the 80-handle. This level also coincides with last week’s high and will act as our topside limit. Look for the pair to remain under pressure amid persistent risk-off flows with only a breach above the 80-figure alleviating further downside pressure. A break below 78.60 invalidates this particular Fibonacci setup with such a scenario risking further losses for the greenback. 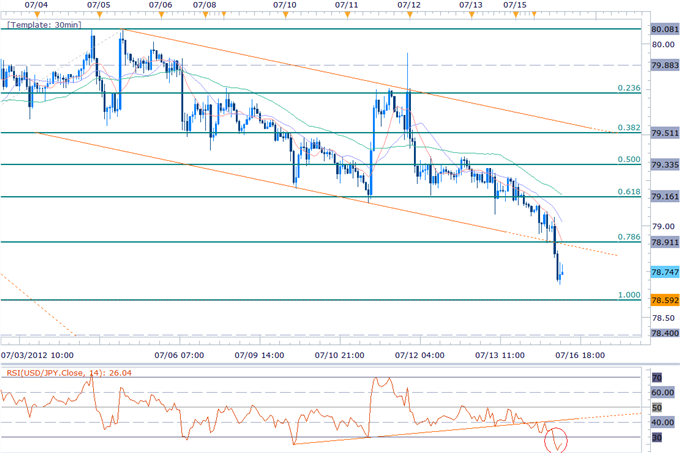 The scalp chart shows the USDJPY breaking below the confluence of short-term channel support and the 78.6% Fibonacci extension taken from the June 24th and July 5th crests at 78.90 before losing steam just ahead of interim support at the 100% extension at 78.60. A break below this mark eyes subsequent floors at 78.40, 78.25, and the 138.2% extension at the 78-handle. Topside resistance stands at 78.90 backed by the 61.8% extension at 79.16 and 79.35. Although our longer-term outlook remains weighted to the topside, the recent risk-off environment will continue to weigh on this pair with the recent drawdown offering favorable long entries below 78.60. Only a break below the June lows at 77.67 invalidates our broader directional bias. 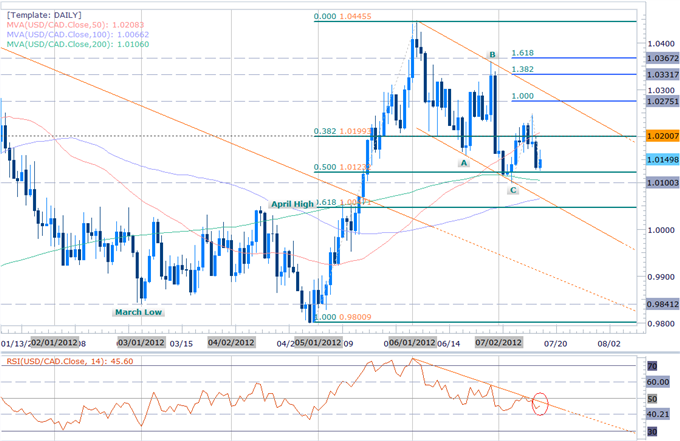 The Canadian dollar is the worst performer on the session with a decline of 0.07% on the session despite broader weakness in the greenback and amid expectations that the Bank of Canada will maintain its current policy at tomorrow’s interest rate decision. The USDCAD rebounded just ahead of the 50% retracement taken from the late April advance at 1.0130 with our initial objective eyed at the 38.2% retracement at the 1.02-figure. The pair remains within the confines of a descending channel formation and seems to have now completed a three wave corrective pullback. Although our outlook on the pair remains weighted to the topside, QE speculation ahead of Fed Chairman Ben Bernanke’s testimony before congress on Tuesday and Wednesday is likely to limit dollar advances in the interim. A break below interim support eyes the confluence of the July lows and the 200-day moving average at the 1.01-handle. Subsequent floors are seen at the confluence of channel support and the 100-day moving average at 1.0065 and the 61.8% retracement at 1.0050. 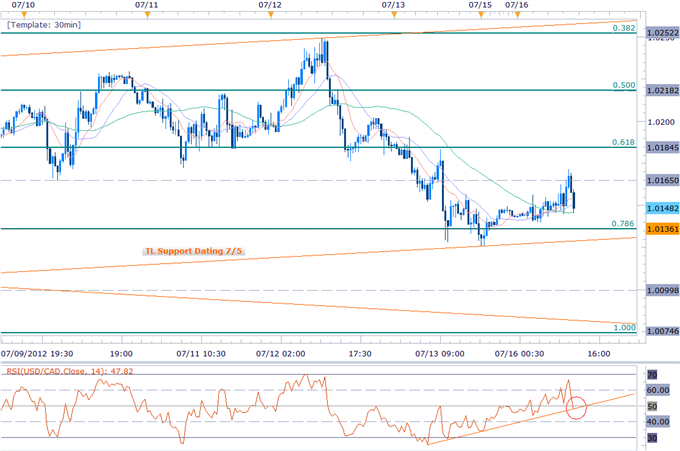 The scalp chart shows the USDCAD holding just above the 78.6% Fibonacci extension taken from the June 3rd and 28th crests at 1.0135 with a break below short-term channel support eying subsequent floors at the 1.01-handle and the 100% extension at 1.0075. Soft interim resistance is eyed at 1.0165 backed by the 61.8% extension at 1.0185 and 1.0220. Look for the pair to travel sideways to higher amid the ongoing risk aversion flows with a breach above the monthly highs at1.0250 offering further conviction on our longer-term directional bias.