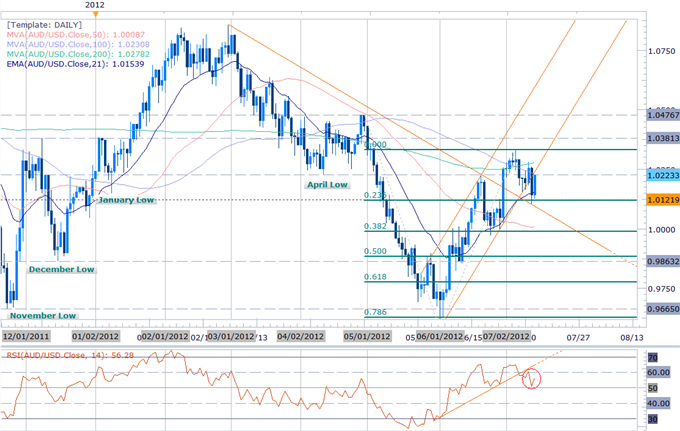 The Australian dollar is the top performer at the close of European trade with an advance of 0.82% on the session. The advance comes amid a substantial rebound in broader risk appetite with US equity markets rallying early in the session. The AUDUSD rebounded off the 23.6% Fibonacci extension taken from the April and July highs before encountering resistance at the four-way confluence of former channel support, the April lows, the 100-day moving average and the R1 daily pivot at 1.0230. Look for this level to cap topside advances today with a break risking a run-up to the 200-day moving average at 1.0280. Our outlook remains weighted to the downside despite today’s advance with only a break above the monthly high at 1.0330 invalidating our directional bias. 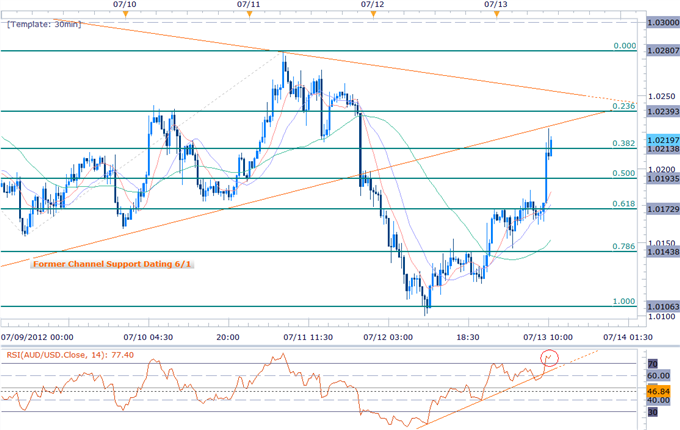 The scalp chart shows the AUDUSD rebounding sharply off the 100% Fibonacci extension taken from the July 5th and 11th crests just ahead of the 1.01-handle before losing steam just ahead of former channel support which also currently stands at 1.0230. Interim support now rests with the 50% extension at 1.0195 with targets seen at the 61.8% extension at 1.0170, 1.0145 and 1.0105. A breach back above former channel support eyes trendline resistance dating back to the July high backed by 1.0280. 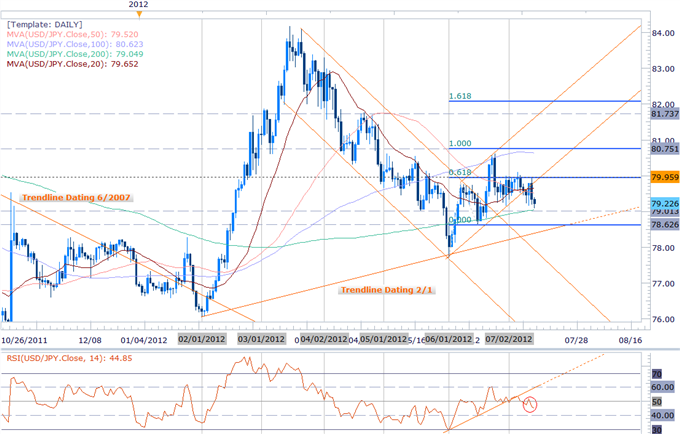 The Japanese yen is the weakest performer against the greenback with an advance of just 0.12% despite broad-based dollar losses. The pair has continued to drift lower since the BoJ interest rate decision on Thursday when the central bank refrained from further monetary easing. We remain neutral on the yen so long as the USDJPY continues to hold its recent 100 pip range between the 79 and 80 handles, with a move below the figure (200DMA) eyeing favorable long entries at 78.60 and trendline support dating back to the February lows. Look for daily RSI to encounter support at the 40-mark with such a scenario suggesting the recent pullback remains just a correction within a larger bull trend. 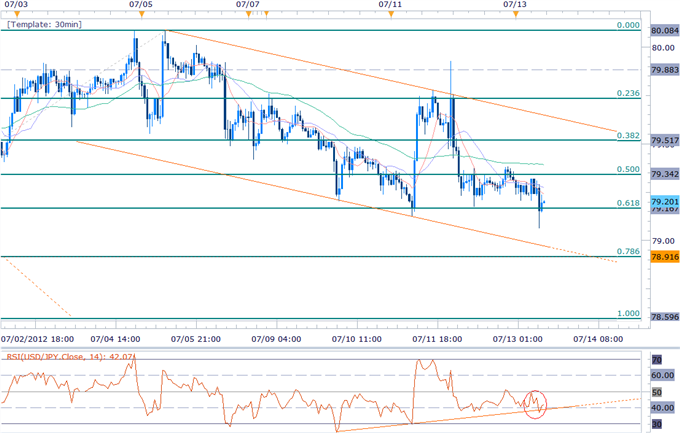 The scalp chart shows the USDJPY trading within the confines of a descending channel formation with the pair struggling to hold above the key 61.8% Fibonacci extension taken from the June 24th and July 5th crests at 79.15. A break below this level eyes subsequent floors at 78.90, the 100% extension at 78.60 and 78.40 (trendline support dating 2/1). Interim topside resistance stands at 79.35 backed by the 38.2% extension at 79.50, 79.75 and 79.90. A breach above the 80-figure alleviates further downside pressure with such a scenario offering further conviction on our directional bias.