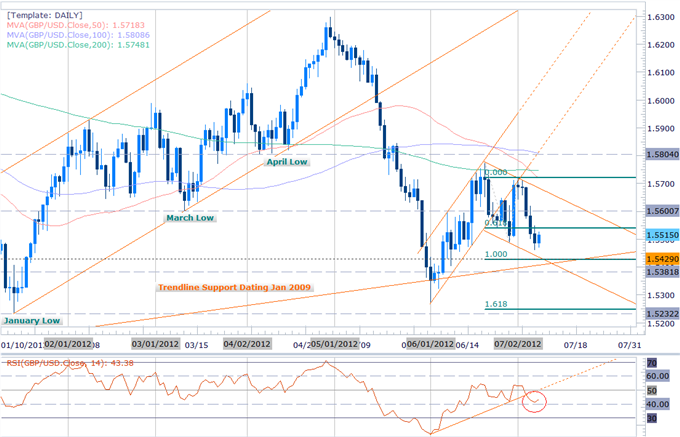 The British pound is the top performer at the close of European trade with an advance of 0.14% on the session. The sterling has remained well supported today after a report from the Sunday Telegraph cited that the Office of Budget Responsibility plans to unveil additional steps to balance the budget in an attempt to further shield the UK economy from the deepening debt crisis. With the UK officially in recession however, the move could weigh on growth prospects and put added pressure on the Bank of England to further expand monetary policy. As such, the recent advance may be short lived with our medium-term bias remaining cautiously weighted to the downside.

The daily chart shows the GBPUSD holding just below the 61.8% Fibonacci extension taken from the June 20th and July 2nd crests at 1.5540. Daily interim resistance stands here with a breach above this level eyeing subsequent ceilings at the March lows at the 1.56-handle and the monthly high at 1.5720. Our objective remains the 100% extension at 1.5430 with critical trendline support dating back to January of 2009 resting just lower ahead of the 1.54-figure. A break of this multi-year trendline risks substantial losses for the pound, with such a scenario eyeing subsequent targets at the 161.8% extension at 1.5250 and the 2012 low at 1.5232. 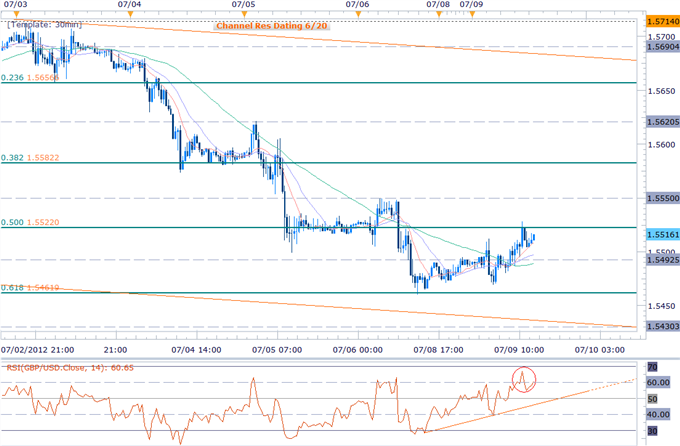 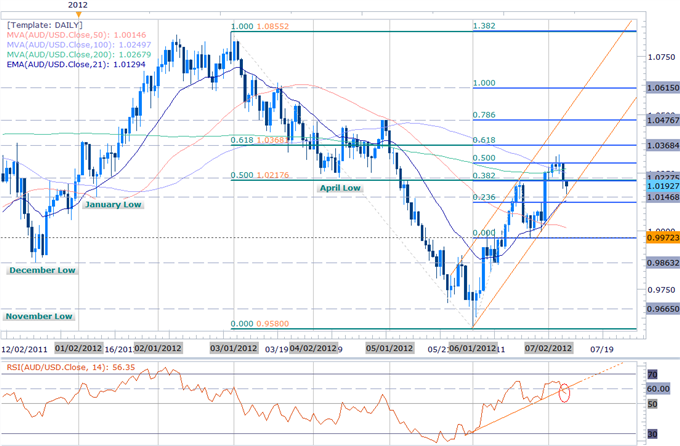 The Australian dollar is the weakest performer against the greenback with a decline of 0.25%. The aussie has continued to track risk rather well with weakness in global equity markets weighing on the pair early in the session. The AUDUSD continues to trade within the confines of an ascending channel formation dating back to June 1st with the pair reversing just ahead of the confluence of the January lows and channel support at 1.0147. Our bias on the aussie has remained weighted to the downside with a break below the 23.6% Fibonacci extension taken from the June 1st and 25th lows at 1.0125 exposing support targets at the 50-Day moving average at 1.0115 and the June 25th low at 9970. A key pivot for the pair stands at the confluence of the 38.2% extension, the 50% retracement taken from the February high to the June low, and the April low around 1.0220/30. A breach above this mark eyes the 200-day moving average at 1.0268 and the 50% extension at 1.0295 with a breach above the monthly highs invalidating this particular setup. Although RSI has now broken below trendline support, we await confirmation in price action with a break below 1.0125 and a move below the 50-mark in RSI offering further conviction on our directional bias. 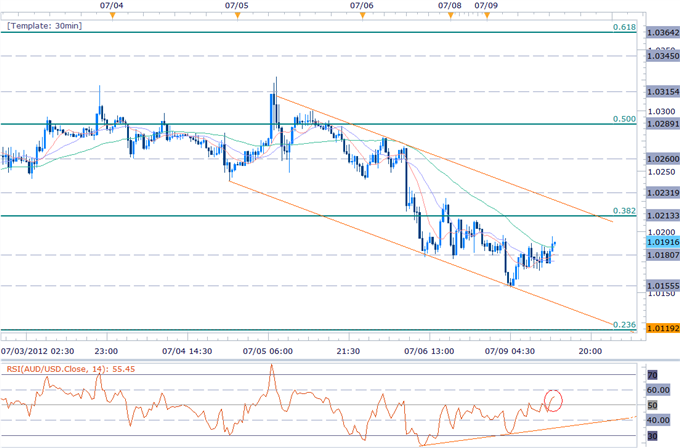 The scalp chart shows the AUDUSD holding within the confines of a short-term descending channel formation with the pair rebounding off the convergence of channel support and soft support at 1.0155. A break below this mark eyes subsequent floors at 1.0120, the 1.01-handle, and 1.0060. Interim topside resistance stands at the 38.2% extension at 1.0215, 1.0232, and 1.0260. We’ll look to sell into aussie strength with a RSI hold below the 60-mark offing further support for our bias.

Join Michael on Tuesday morning for a Live Scalping Webinar at 1400 GMT (10ET) on DailyFX Plus (Exclusive for Live Clients).