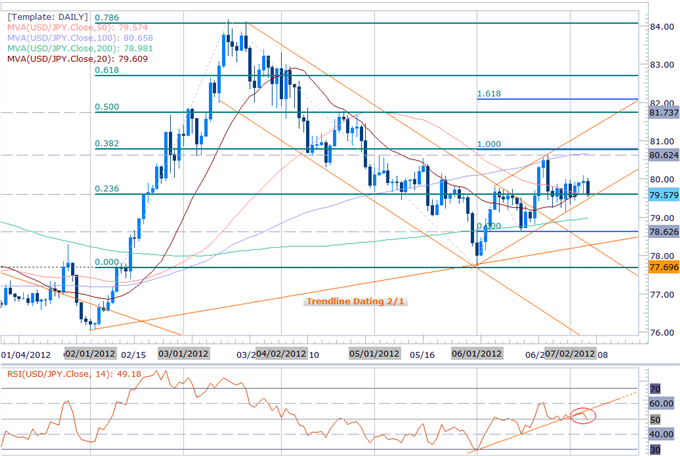 The Japanese yen is the top performer against a stronger greenback at the close of European trade with the USDJPY off by 0.50% on the session. A weaker- than-expected print on the June non-farm payrolls report has sparked classic risk aversion flows with the dollar advancing against all its major counterparts, save the yen. NFPs came in at 80K, missing consensus estimates for a read of 100K, with the unemployment rate holding steady at 8.2%. The data is just weak enough where it’s unlikely to prompt further Fed action, but also weighs on broader risk sentiment with equity markets off sharply early in the session by 1.1-1.4% across the board. As we have often noted, risk-off environments will continue to weigh on this pair as positive real interest rates in Japan increase the yen’s appeal as a store of wealth.

The daily chart shows the USDJPY holding just above key daily support at the confluence of the 50 & 20-day moving averages and the 23.6% Fibonacci extension taken from the February and June lows at 79.60. A break below this mark eyes subsequent daily support levels at the 200-day moving average at the 79-figure and the June low at 77.67. We have maintained our long position with a break lower offering favorable entry points with our stop held just below the June lows. Our initial objective is eyed at the June highs at 80.62 (100-day moving average) with key resistance seen at the confluence of the 100% and 38.2% Fibonacci extensions at 80.80. Note that although daily RSI has now broken below trendline support, a rebound off the 50-mark bodes well for continued dollar strength, with only a break below the June lows invalidating our medium-term directional bias. 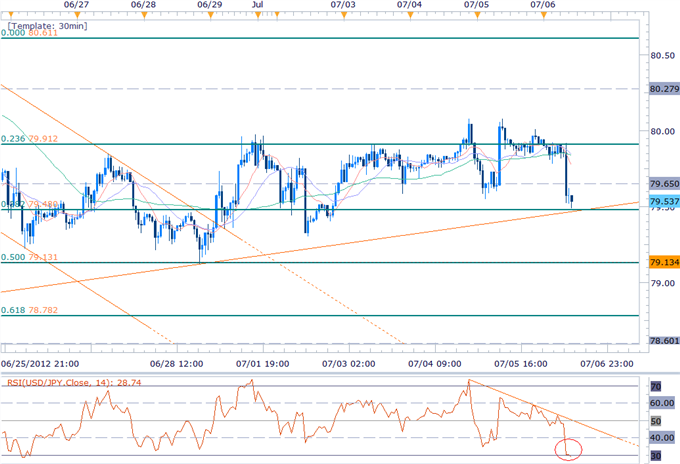 The scalp chart shows the USDJPY holing just above daily support at the confluence of trendline support dating back to June 1st and the 38.2% retracement taken off the June advance at 79.50. Soft interim resistance stands at 79.65 backed by the 23.6% retracement at 79.90 and 80.28. A break below interim support eyes subsequent floors at 79.13, the 61.8% retracement at 78.80 and 78.60. As we mentioned above, a break below this level challenges are bias with such a scenario eyeing longer-term trendline support dating back to the yearly lows, currently around 78.30. 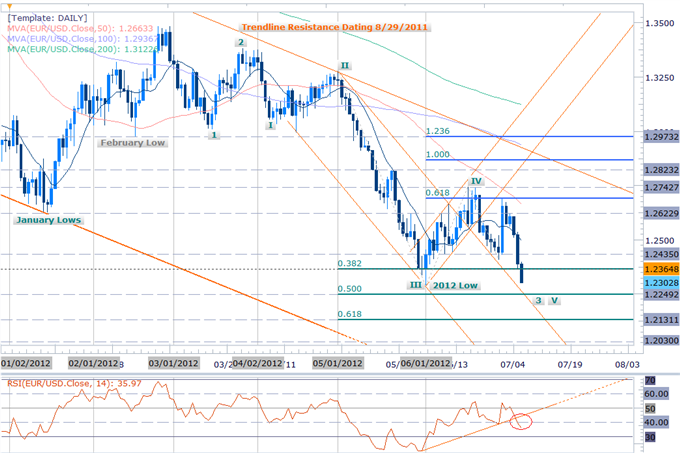 The euro is the weakest performer among the majors with a decline of 0.71% on the session. The single currency has remained under pressure since yesterday when the ECB announced it would cut rates to by 25 basis points to 0.75% in an attempt to support the faltering recovery. The move marks the first time the interest rate has fell below 1% since the euro’s inception. It seems more likely that the region will face a pro-longed recession as yields on Spanish and Italian debt hold near record highs with the euro likely to remain under pressure in the coming weeks. Daily support for the pair is now eyed at the 50% Fibonacci extension taken from the May and June highs at 1.2250 with an RSI break below the 50-mark offering further conviction on our bias. A break below this level exposes targets lower at the key 61.8% extension at 1.2130 and 1.2030. Initial daily resistance now stands at the 38.2% extension at 1.2370 and is backed by 1.2435. 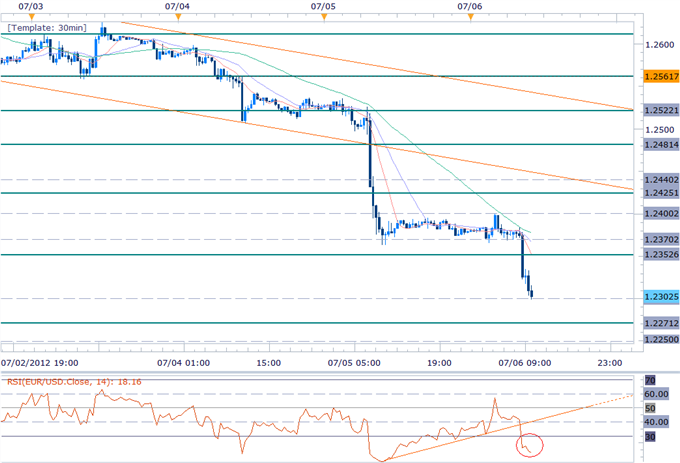 Join Michael on Monday morning for a Live Scalping Webinar at 1200GMT (8:00ET)