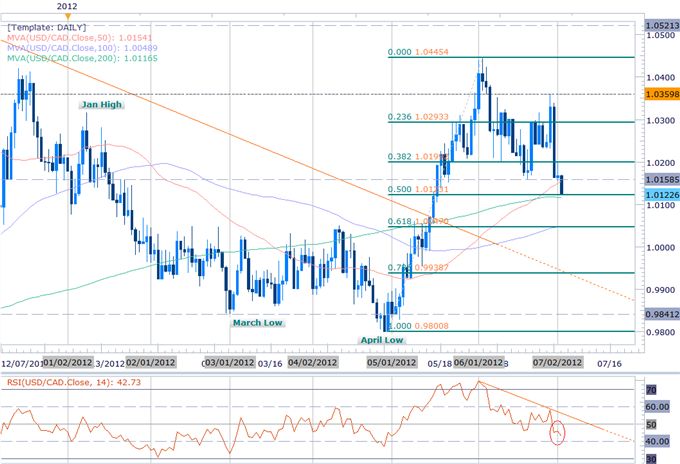 The Canadian dollar is the top performer at the close of European trade with an advance of 0.46% on the session. The loonie has been supported by a rebound in risk appetite and rising crude prices with the USDCAD now testing daily support at the 50% Fibonacci retracement taken from the late April advance at 1.0124. This level is backed closely by the 200-day moving average at 1.0116, which if compromised eyes support at the confluence of the key 61.8% retracement and the 100-day moving average a 1.0050. Soft daily resistance stands at the former June lows at 1.0158 followed by the 38.2% retracement at the 1.02-figure. 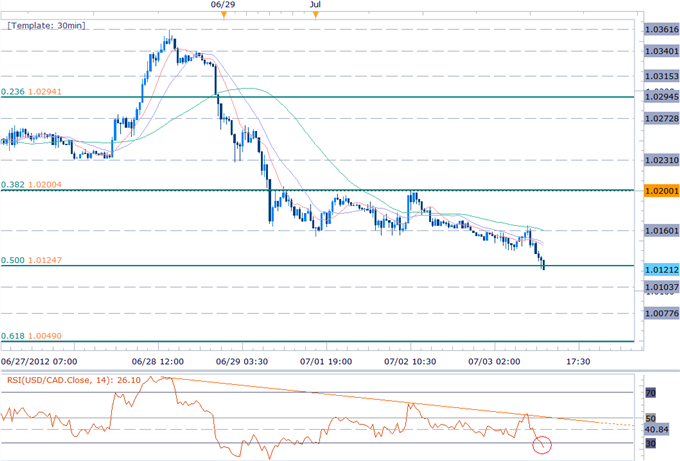 The scalp chart shows the USDCAD struggling to break below the 50% retracement at 1.0124 with subsequent support targets seen at the 1.01-handle, 1.0075 and the 61.8% retracement at 1.0050. Interim resistance stands at 1.0160 backed by the 1.02-figure, 1.0230 and 1.0273. Although our medium-term bias on the pair remains weighted to the topside, a sustained rally in crude coupled with a strong risk on environment may keep the pair under pressure. As such, look for pullbacks to offer favorable long entries with only a close below the 61.8% retracement at 1.0050 invalidating our directional bias. 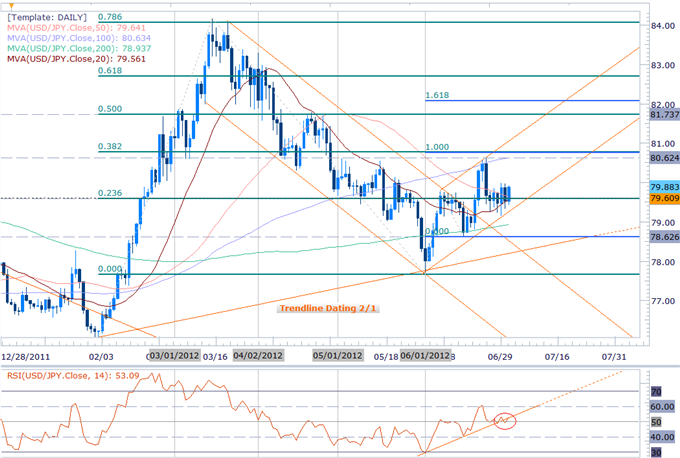 The Japanese yen is the weakest performer against the greenback with a decline of 0.45% on the session. The USDJPY has continued to hold its recent range between 79.25 and the 80-handle with pair trading within the confines of an ascending channel formation dating back to the first of June. We have maintained our long position with daily topside resistance targets seen at the confluence of the June high and the 100-day moving average at 80.62 and the confluence of the 100% and 38.2% Fibonacci extensions at 80.80. Channel support now rests around the 79.30 mark with a break below this level eyeing subsequent floors at the 200-day moving average at 78.95 and the June 15th swing low at 78.63. We reserve this level as our bottom limit which if compromised invalidates our bullish bias. 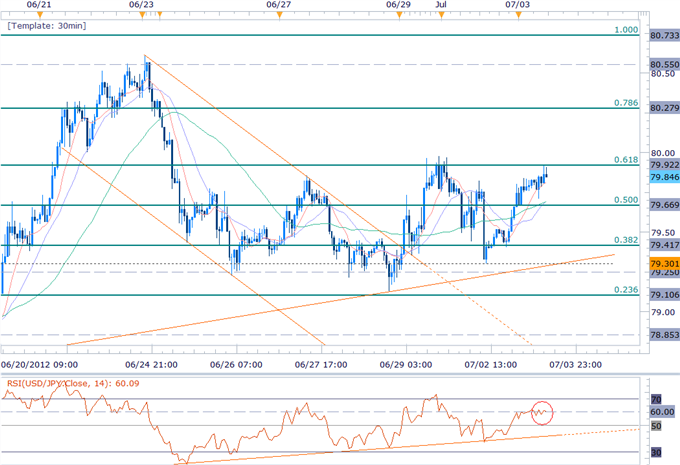 The scalp chart shows the USDJPY holding just below interim resistance at the 61.8% Fibonacci extension taken from the June 1st and 15th troughs at 79.92. A breach above this mark exposes subsequent resistance targets at the 78.6% extension at 80.30, 80.55, and the 100% extension at 80.73. Note that a break and hold above the 60-mark in RSI would bode well for intra-day long scalps with a break above 70 offering further conviction on an extended rally. A break back below the 50-mark in RSI puts a bearish tone on the pair with support levels seen at 79.65, the 38.2% extension at 79.40 and 79.25. Expect thin trading conditions as we head into tomorrow with US markets closed for the 4th of July holiday.

Join Michael on Thursday morning for a Live Scalping Webinar at 1330 GMT (9:30ET)