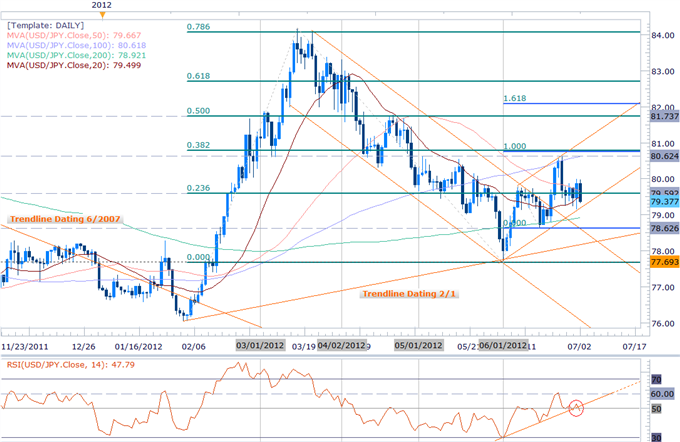 The Japanese yen is the top performer against the dollar at the close of European trade with an advance of 0.54% on the session. Weaker-than-expected US ISM figures weighed on risk appetite early in session with the data showing contraction in the manufacturing sector for the first time since July of 2009. The news stoked demand for safety with equity markets coming off sharply as the yen, the dollar, and US Treasuries advanced. However, as we have noted multiple times over the past few weeks, real positive interest rates in Japan and the ongoing threat of additional Fed easing continues to increase the appeal of the yen as a store of wealth amid periods of risk aversion with such environments putting pressure on the USDJPY pair despite broader dollar strength.

The daily charts shows the USDJPY continuing to straddle the 23.6% Fibonacci extension taken from the February and June lows at 79.60 with the pair now eyeing channel support dating back to June 1st at approximately 79.20. A break below this level exposes subsequent floors at the 200-day moving average at 78.92 and the June 15th lows at 798.62. A break below this level risks significant losses for the greenback with such a scenario eyeing daily targets at trendline support dating back to the February and June lows at 77.67. Initial daily resistance stands at the 80-handle and is backed by the June highs at 80.63 (also the 100-day moving average) and the confluence of the 38.2% extension and the shorter-term 100% extension taken from the June 1st and 15th troughs at 80.80. Note that daily RSI has now threatened trendline support with a move below the 40-mark risking a break below channel support in price action. 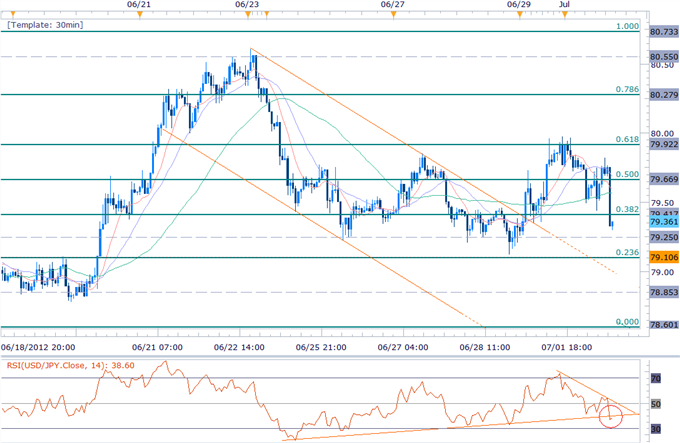 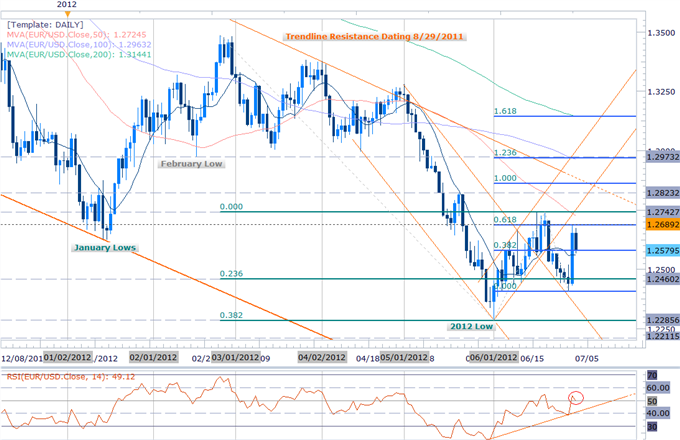 The euro is the weakest performer against the greenback with a loss of 0.69% on the session. The EURUSD continues to suffer from a hangover after Friday’s rather upbeat EU summit yielded new measures aimed at supporting Spanish bonds with leaders agreeing to drop preferred creditor status on emergency loans released to banks. The pair rebounded off the key 61.8% Fibonacci extension taken from the June 1st and 28th lows at 1.2690 before encountering daily support at the 38.2% extension at 1.2580. A break below this level risks further euro losses with subsequent daily floors seen at the 1.2460 and 1.2405. A breach above the 61.8% extension eyes the June highs around 1.2745 and is backed by soft resistance at 1.2823. While our outlook on the single currency remains weighted to the downside, it’s important to note that the ECB rate decision on Thursday is likely to fuel volatility in the pair as the central bank considers various measures to support growth in the region. Daily RSI now looks poised for move back below the 50-mark with a break below trendline support offering further conviction on our directional bias. 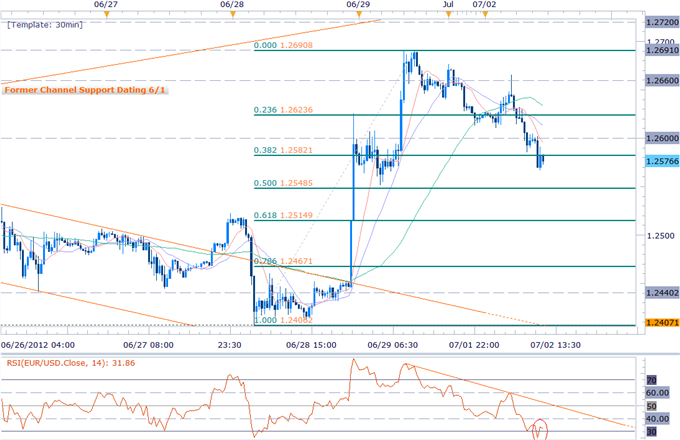 The scalp chart shows the EURUSD trading just below the 38.2% Fibonacci retracement taken from the advance off the June 29th lows at 1.2582 with subsequent support targets seen at 1.2550, the 61.8% retracement at 1.2515, and 1.2465. Soft interim resistance stands at the 1.26-figure and is backed by the 23.6% retracement at 1.2624, 1.2660 and Friday’s high at1.2690. Look for some consolidation into the close with a breach above RSI trendline resistance risking a pullback of magnitude before continuing lower.