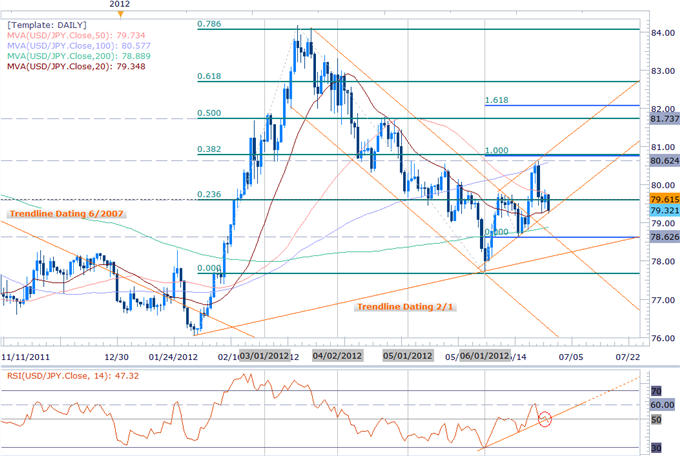 The Japanese yen is the top performer against the greenback at the close of European trade with an advance of 0.53% on the session. A strong bout of risk aversion has dominated trade as policy makers meet in Brussels for the EU Summit with haven flows propping up both the greenback and the yen. Positive real interest rates in Japan have continued to increase the appeal of the yen as a store of wealth with the USDJPY coming under pressure despite broader dollar strength.

The daily chart shows the USDJPY testing channel support at 79.25 after rebounding off the 50-day moving average at 79.75. A break here exposes daily support at the 200-day moving average at 78.90 backed closely by the June 15th low at 78.62. We have maintained our core long position with our stops held just below this level. Initial daily resistance now stands with the 50-day moving average with subsequent topside targets eyed at the former May highs at 80.62. Key resistance for the pair stands just above at the confluence of the 38.2% Fibonacci extension taken from the February and June Lows and the 100% extension taken form the June 1st and 15th troughs at 80.75. This level remains our initial objective for next month with a breach above exposing targets around the 82-handle. 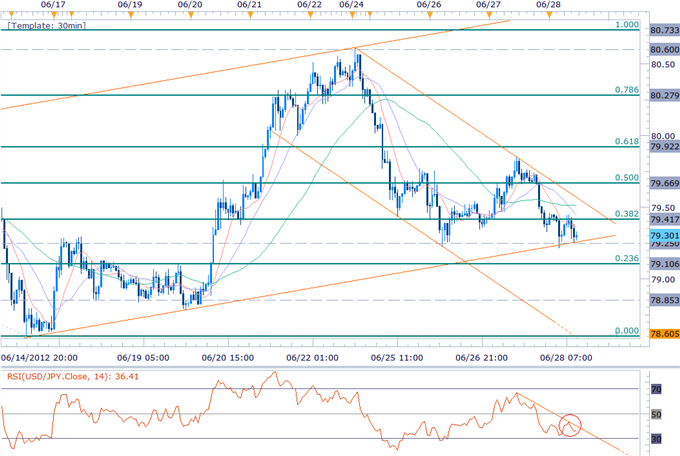 The scalp chart shows the USDJPY trading within an embedded descending channel formation dating back to last week’s highs with the pair resting channel support at 79.25. Interim topside resistance targets are eyed at the 38.2% Fibonacci extension taken from the June 1st and 15th troughs at 79.40, 79.65, and the 61.8% extension at 79.92. A break below channel support risks a more substantial correction to the downside with subsequent support targets eyed at the 23.6% extension at 79.10, 78.85, and the June 15th low at 78.60. Note that a breach above RSI trendline resistance alleviates some of the downside pressure with a break above the 50-mark offering further conviction on intra-day longs. 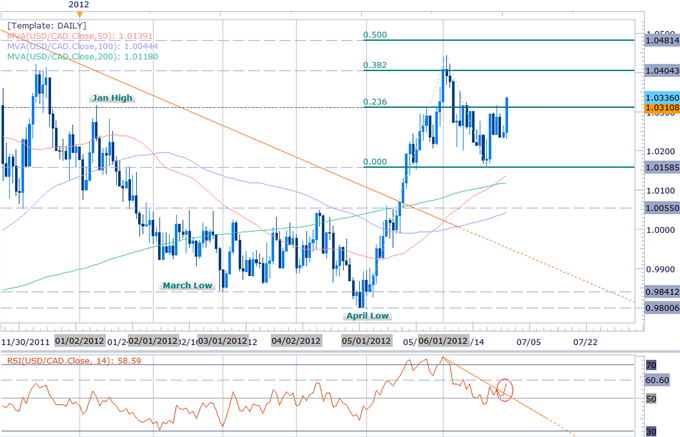 The Canadian dollar is the weakest performer against the greenback with a decline of 0.80% on the session. Weakness in crude prices coupled with a substantial bout of risk aversion has weighed heavily on the loonie with the USDCAD breaching above key daily resistance at the 23.6% Fibonacci extension taken from the April and June lows at 1.0310. Daily resistance is now eyed at the 38.2% extension at the 1.04-handle with a breach above RSI trendline resistance offering further conviction on our bullish directional bias. Daily support now rests at the weekly lows at 1.0230 with only a break below the June low at 1.0160 invalidating our current setup. 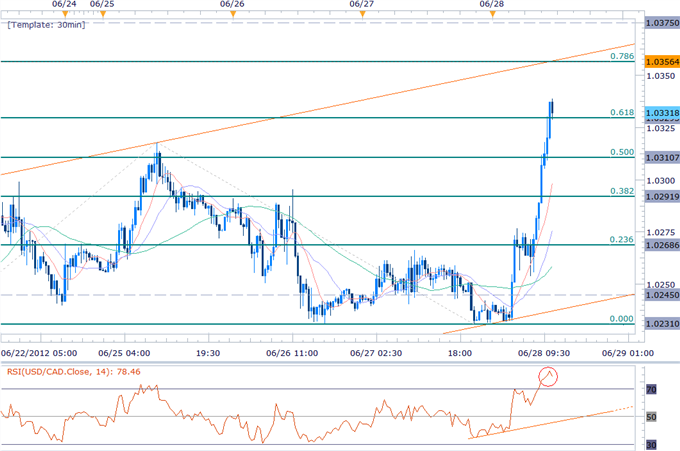 The scalp chart shows the USDCAD resting on interim support at the 61.8% Fibonacci extension taken from the June 20th and 27th troughs at 1.0330. Look for the pair to remain well supported with initial topside targets eyed at the confluence of channel resistance and the 78.6% extension at 1.0355. A break above this level eyes subsequent ceilings at 1.0375 and the 100% extension at 1.0390. A move below interim support sees floors at 1.0310 backed by the 38.2% extension at 1.0290 and the 23.6% extension at 1.0270. Our outlook remains weighted to the topside with pullbacks offering favorable long entries on intra-day scalps.