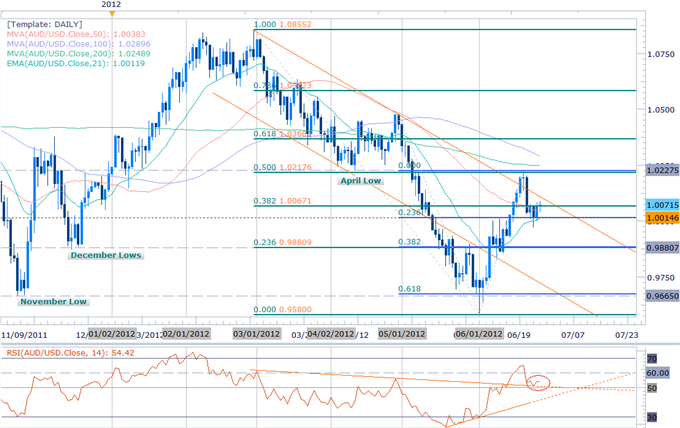 The Australian dollar is the top performer against the greenback at the close of European trade with an advance of 0.09% on the session. The dollar has remained well supported despite a rally in equity markets with the greenback outperforming all its major counterparts save the aussie. Stronger-than-expected US durable goods orders have kept broader risk appetite supported with subsiding calls for further Fed easing reducing downward pressure on the reserve currency.

The AUDUSD held a tight range in overnight trade with the pair currently straddling the 38.2% Fibonacci retracement taken from the late February decline at 1.0067. A fresh Fibonacci extension (blue) taken from the April 30th and June 20th highs highlights interim support at the 23.6% extension at 1.0015 with our primary objective eyed at the confluence of the 38.2% extension and the 23.6% retracement at 9880. We maintain our bearish bias on the pair with only a breach above the confluence of the 50% retracement and the April lows at 1.0225 invalidating our current setup. 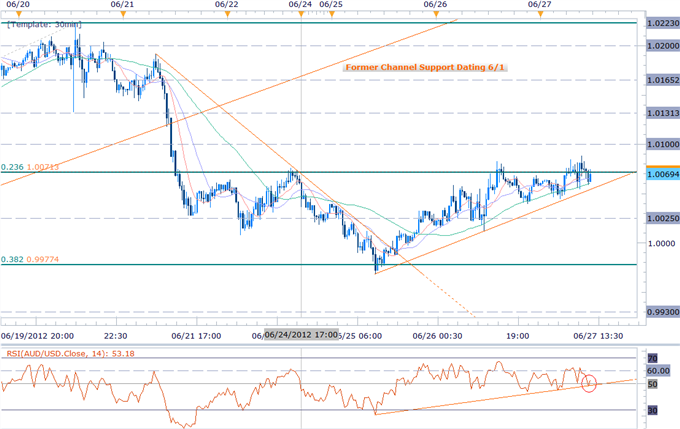 The scalp chart shows the AUDUSD continuing to trade above short-term trendline support with interim resistance seen at the 1.01-handle backed by 1.0130 and 1.0165. A break below trendline support eyes subsequent support targets at 1.0025, the 38.2% Fibonacci retracement taken from the June advance at 9977, and 9930. Note that RSI has continued to hold above trendline support dating back to the June 25th low with a break below putting our downside targets in view. 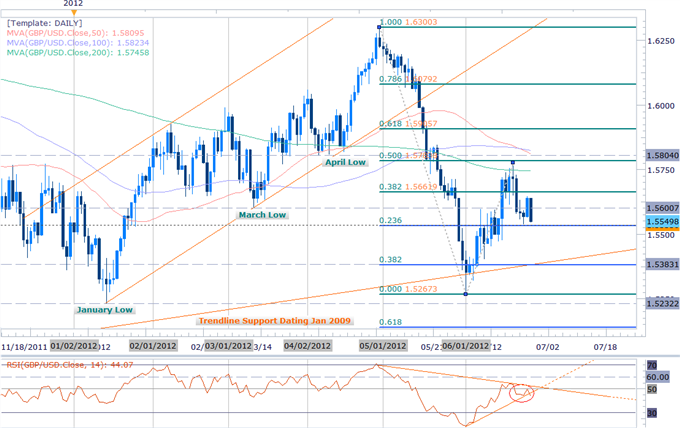 The British pound is the weakest performer against the dollar with a decline of 0.58% on the session. The GBPUSD now eyes dailyinterim support at the 23.6% Fibonacci extension (blue) taken from the April 30th and June 20th highs at 1.5535. A break below this level exposes subsequent floors at the confluence of long-standing trendline support dating back January 2009 and the 38.2% extension at 1.5385. Daily resistance stands at the 38.2% retracement taken form the April 30th decline at1.5660 and is backed by the 200-day moving average at 1.5745 and the 50% retracement at 1.5783. Note that daily RSI is now probing below trendline support dating back to the June low with a close below this trendline needed to confirm the break. An accompanied break in price action below the 23.6% extension at 1.5535 shifts our focus lower with such a scenario eyeing subsequent support targets. 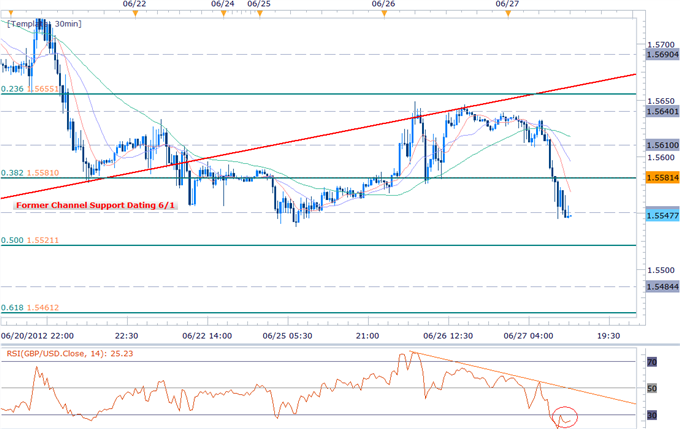 Join Michael on Thursday morning for a Live Scalping Webinar at 1330 GMT (9:30ET)