Euro Heavy on Key Daily Support at 1.2460- Yen Strength to Taper Off 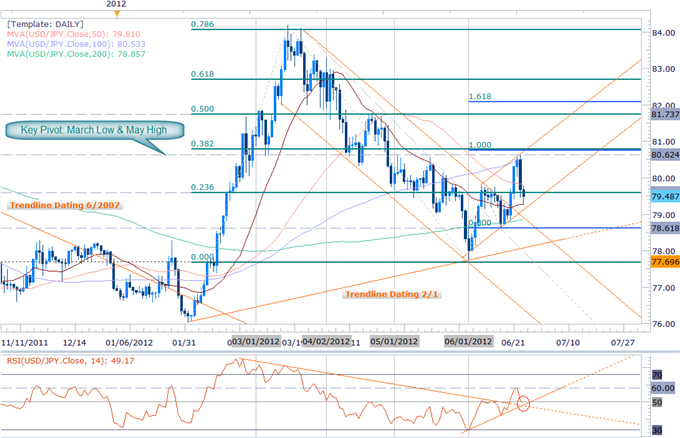 The Japanese yen is the top performer at the close of European trade for a second consecutive session with an advance of 0.28% on the session. Risk-aversion trades have continued to prop up demand for the low yielder with the USDJPY pulling away from key resistance at the March low and May high at the 80.60 pivot level. Interim daily support now rests with the 20-day moving average at 79.25 backed by channel support and the 200-day moving average at 78.85. We have maintained our core long position, adding on pullbacks in the pair, with only a break below the June 15th low at 78.60 invalidating our current setup. Topside resistance stands 80.60 with a breach above key resistance at 80.80 offering further conviction on our directional bias. As noted in the previous Winners/Losers report, “Daily RSI has now rebounded off the 60-mark, suggesting that the oscillator may look for another bounce off former RSI resistance before resuming higher.” The oscillator is now testing the confluence of former trendline resistance and trendline support dating back to the first of the month with a break below this level risking a more substantial pullback in the dollar.

The scalp chart shows the USDJPY holding within the confines of an ascending channel formation with the pair currently trading just above the 38.2% Fibonacci extension taken from the June 1st and 15th troughs at 79.40. Interim topside resistance targets are eyed at 79.65, the 61.8% extension at 79.90, 80.25, and the June high at 80.60. A break below channel support (specifically the 23.6% ext at 79.10) exposes soft support at 78.85 and the June 15th low at 78.60. As noted earlier, a break below this level negates this current setup with such a scenario likely to see a test of the June lows below the 78-figure. 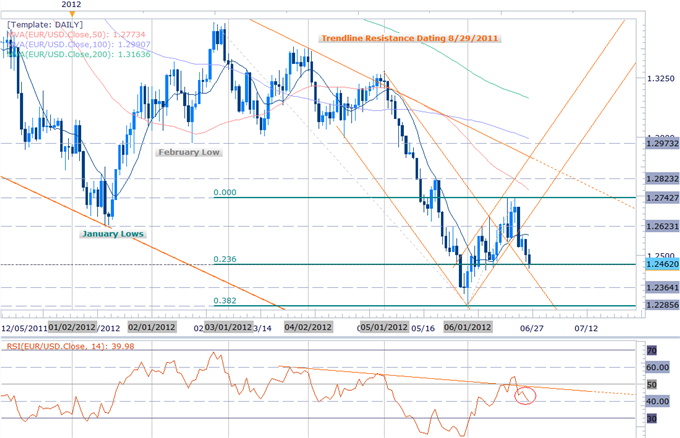 The euro is the weakest performer with a decline of 0.36% on the session as yields on Italian and Spanish debt continue to rise. The EURUSD now rests just above daily support at the 23.6% Fibonacci extension taken from the February and June highs at 1.2460 with a break below this mark exposing support targets at 1.2365 and the June lows at 1.2285. While it’s unlikely the euro will break the lows this month, we continue to eye the 38.2% extension as our primary objective should the 1.2460 level be compromised. Daily resistance stands at the January lows at 1.2623 backed by the June highs at 1.2742. Note that daily RSI has pulled back below trendline resistance with a break below the 40-mark offering further conviction on our bearish directional bias. 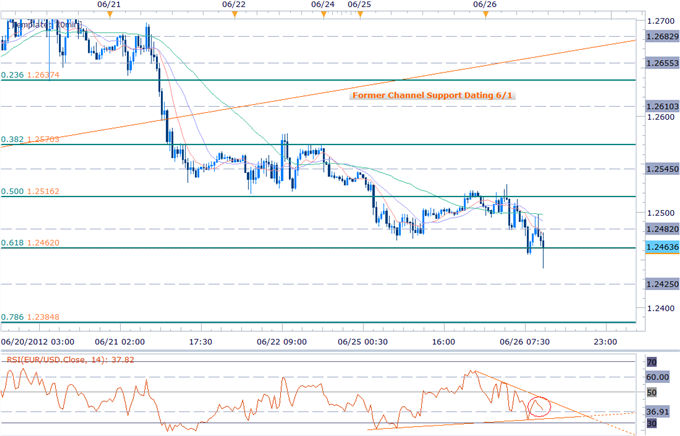 Join Michael on Wednesday morning for a Live Scalping Webinar at 1330 GMT (9:30ET)