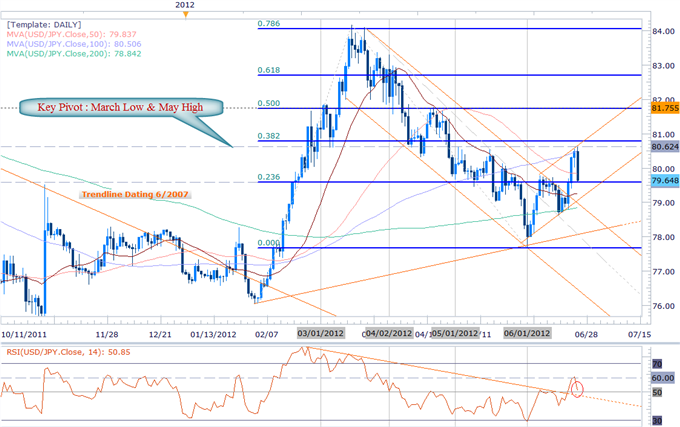 The Japanese yen is the top performer at the close of European trade with an advance of 1.17% on the session. A strong bout of risk-aversion has propped up demand for the low yielder with the yen besting all its major counterparts early in the week. The USDJPY reversed sharply off key resistance at March low and the May high at the 80.60 pivot level. Interim daily support rests at the 23.6% Fibonacci extension taken from the February and June lows at 79.60 and is backed by the 20-day moving average at 79.25 and channel support, currently around the 79-figure. We maintain our medium-term bullish bias on the pair with the pullback offering favorable entries between the 200-day moving average (currently 78.84) and the 23.6% extension. Note that the pair is likely to remain under pressure so long as market sentiment remains on the defensive with only a break below June 15th low at 78.62 invalidating our current setup. Daily RSI has now rebounded off the 60-mark, suggesting that the oscillator may look for another bounce off former RSI resistance before resuming higher. 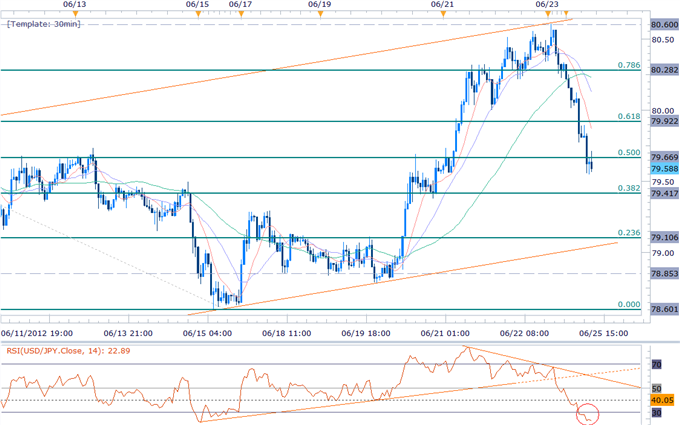 The scalp chart shows the USDJPY holding within the confines of an ascending channel formation with the pair currently trading just below the 50% Fibonacci extension taken from the June 1st and 15th troughs at 79.65. Interim support now rests at the 38.2% extension at 79.40 backed by the confluence of channel support and the 23.6% extension at 79.10. A break below this level risks a more substantial correction with such a scenario eyeing soft support and 78.85 and the June 15th low at 78.60. A breach above the 50% extension eyes topside targets at the 61.8% extension at 79.90, the 78.6% extension at 80.28 and the Sunday open high at 80.60. 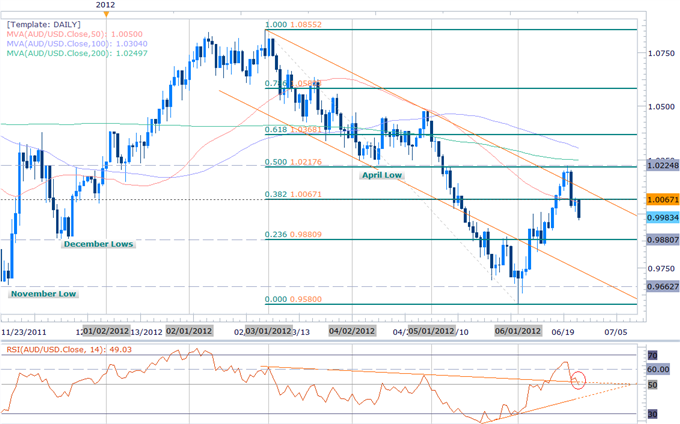 The Australian dollar is the weakest performer against a stronger greenback with a loss of more than 0.79% in early US trade as risk-off flows continue to weigh on the high yielder. The AUDUSD pulled away from daily resistance at the 38.2% Fibonacci retracement taken from the late February to June decline with a break below last week’s low at 1.0010 exposing key daily support targets at the confluence of the December low and the 23.6% retracement at 9880. A Fibonacci extension (not depicted in the chart above) taken form the April 30th and June 20th crests, further highlights the 9880-level (38.2% extension) and this target will now act as our primary objective for the aussie. A breach above 1.0010 risks a run on the June highs with only a breach above the 200-day moving average invalidating our directional bias. 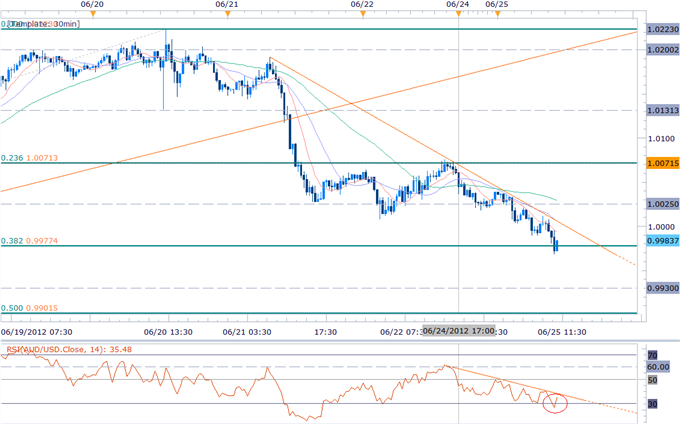 The scalp chart shows the AUDUSD trading just above interim support at the 38.2% Fibonacci retracement taken for the June advance at 9975. Subsequent support targets are eyed at 9930, the 50% retracement at the 99-figure and the key support previously mentioned at 9880. An RSI break above trendline resistance coupled with a breach above trendline resistance dating back to the 21st in price action, eyes topside resistance levels at 1.0025, the 23.6% retracement at 1.0070, and 1.0130. We continue to favor the short-side in the aussie while noting that a strong improvement in risk appetite would likely limit losses in the interim.