NZD Outperforms on Snap Back- USDJPY Breakout Eyes May Highs 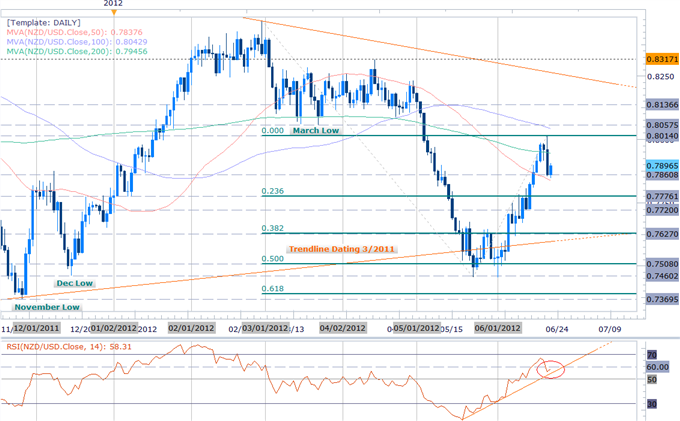 The New Zealand dollar it the top performer at the close of European trade with an advance of 0.41% on the session. The advance comes amid a rebound in risk appetite with US equity markets paring a small portion of the massive declines seen yesterday. The kiwi now looks to have put in a major top for the month of June with NZDUSD bouncing off soft support at 7860. Our outlook on the pair is now weighted to the downside with a break of Daily RSI support dating back to May low offering further conviction on our directional bias. Support targets are eyed at the 23.6% Fibonacci extension taken form the February 29th and June 21st highs at 7775 backed by 7720 and the 38.2% extension at 7630. Daily resistance now stands with the 200-day moving average at 7945 with only a breach above the yesterday’s high at 8015 invalidating our bias. 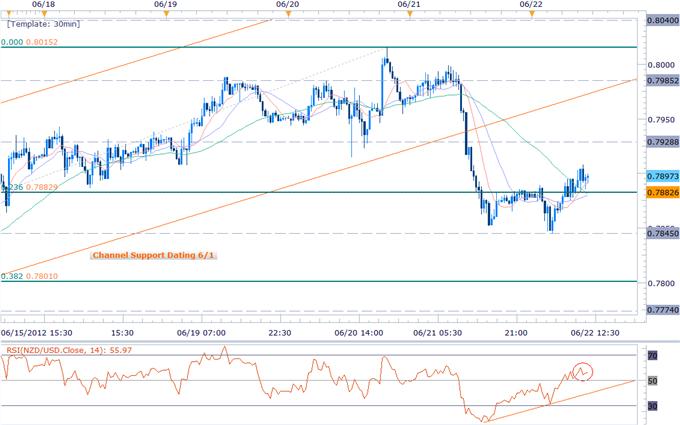 The scalp chart shows the NZDUSD breaking below channel support dating back to the first of the month with the pair now straddling the 23.6% retracement taken from the June advance at 7883. Interim soft resistance stands at 7930 backed by former channel support (now resistance) and the monthly high at 8015. A break below interim support at 7845, eyes subsequent targets at the 38.2% retracement at 7800, 7775 and the 50% retracement at 7735. Look for RSI to hold below the 60-mark with a breach above likely to see a test of former channel resistance. 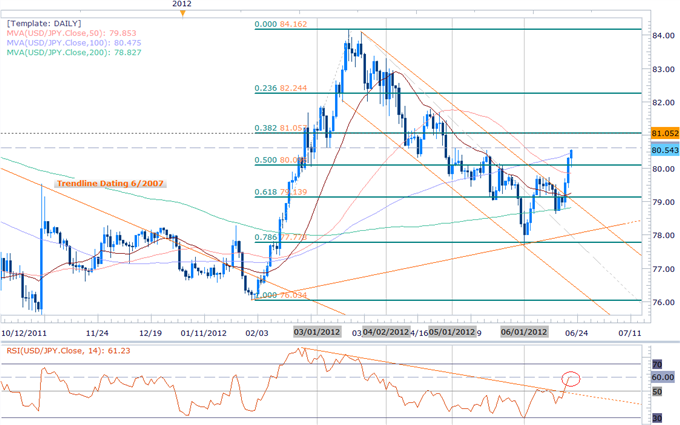 The Japanese yen is the weakest performer against the greenback with a decline of 0.34% on the session. We have maintained our long position on the USDJPY from 78.73 with this week’s breach above channel resistance dating back to the March high offering clear conviction on our directional bias. Interim daily resistance now stands at the March low at 80.60 and is backed by our initial objective at the 38.2% retracement taken from the February advance at 81.05. Daily support now rests with the 50% retracement at 80.10 backed by the 50-day moving average at 79.85 and the 61.8% retracement at 79.14. Note that RSI now is testing the 60-mark with a close above this level offering evidence that the pair has now completed the correction off the March highs. 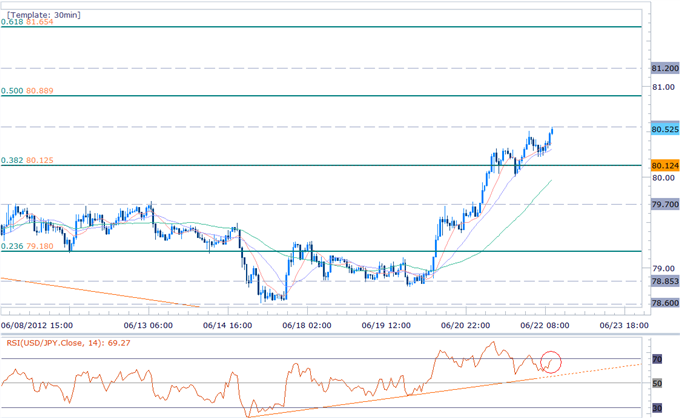