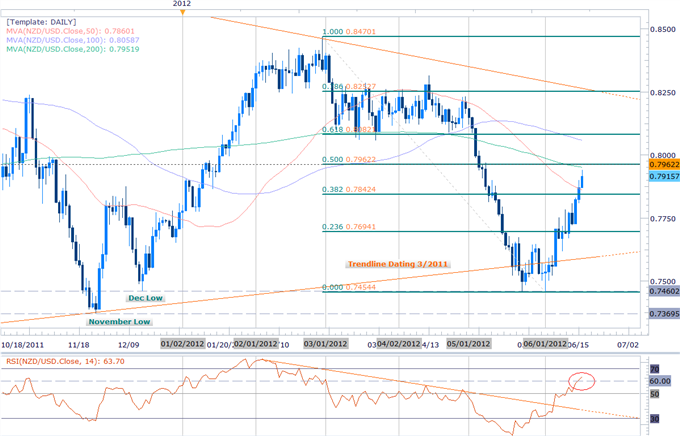 The New Zealand dollar is the top performer ahead of the European close with an advance of 0.43% on the session. Although the New Democracy pro-bailout party was victorious in the Greek elections over the weekend, the relief rally seen on the heels of the election has been short-lived as yields on Spanish debt soared in early US trade with the 10-year surging as high as 7.285%. This marks the highest yield seen on Spanish debt since April 1997 with Italian debt also coming under pressure in European trade. With the results of the Greek vote now seemingly eliminating the chance of a G20 coordinated intervention, the euphoria from the results are likely to quickly fade with all eyes now turning to the FOMC rate decision on Wednesday where investors will be lending a keen ear to Bernanke’s remarks for clues as to whether the central bank will look to embark on more easing to help support the fragile recovery.

Despite the lackluster performance in broader risk assets, the kiwi has remained well supported with the NZD/USD now eyeing daily resistance at the 200-day moving average at 7950. Initial daily support rests with the 50-day moving average at 7860 and is backed closely by the 38.2% Fibonacci retracement taken from the February 29th decline at 7840. Note that an RSI breach above the 60-mark suggests that downside pressure on the pair may be limited in the interim with a close above this level offering further conviction on kiwi advances in the days ahead. 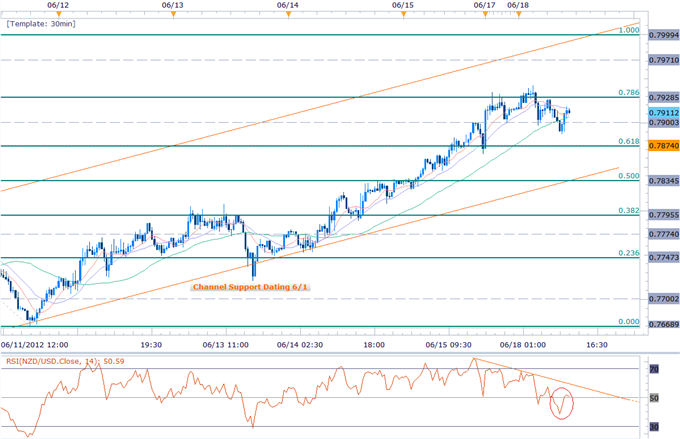 The scalp chart shows the NZD/USD trading within the confines of an ascending channel formation dating back to June 1st with the pair holding just below the 78.6% Fibonacci extension taken from the June 1st and 11th troughs at 7930. Subsequent topside resistance targets are seen at 7970, and the confluence of the 100% extension and channel resistance at the 80-handle. Look for topside advances here to be limited in intra-day trade with interim support seen at the 61.8% extension at 7875 and 7835. A break below channel support risks a more substantial correction to the downside with such a scenario eyeing support targets lower at the 38.2% extension at 7795, 7775, and the 23.6% extension at 7750. 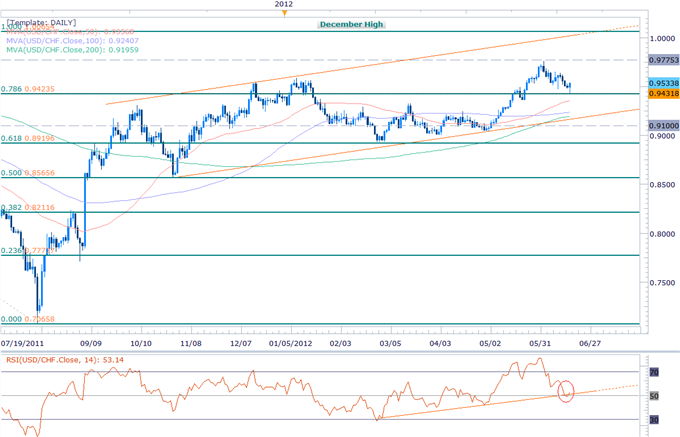 It the Swiss franc is the weakest performer against a stronger greenback with the swissie off by 0.31% at the close of European trade. A look at the encompassing structure sees the USD/CHF continuing to trade within the confines of an ascending channel formation dating back to the October lows with the pair rebounding off the 78.6% Fibonacci retracement taken from the December 2010 to August 2011 decline at 9425. The swissie has continued to track the euro with precision after the SNB reaffirmed its commitment to maintain the EUR/CHF peg last week. As such, we remain cautiously bearish on the USD/CHF on account of euro weakness while noting that daily resistance at the 2012-highs at 9770 backed by the December 2010 high at 1.0065. Only a break below this channel formation would dispel further pressure on the swissie with such a scenario eyeing soft support at the 9100-figure and the 61.8% retracement at 8920. 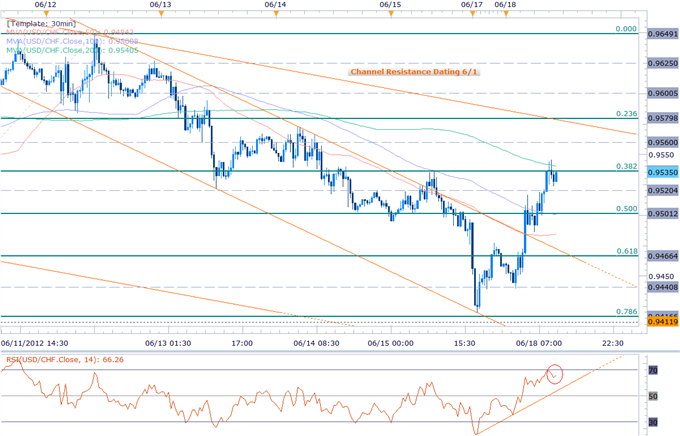 The scalp chart shows the USD/CHF breaking above trendline resistance of an embedded short-term descending channel formation in overnight trade before encountering resistance at the 38.2% Fibonacci extension taken from the June 1st and 12th and crests at 9535. Note that the pair remains within the confines of a broader descending channel from the first of the month with a break above interim resistance eyeing topside targets at 9560 and the 23.6% extension at 9580. A topside break of the channel offers further conviction on our directional bias with subsequent resistance targets eyed at the 96-figure, 9625, and the June 12st high at 9650. Interim support rests at 9520 backed by the 95-figure and 61.8% extension at 9465.