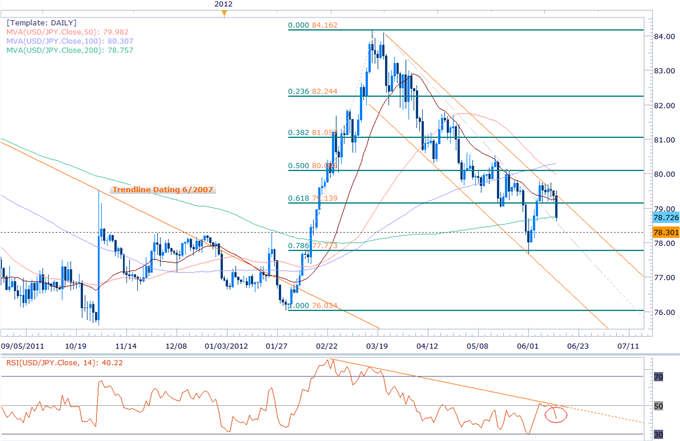 The Japanese yen is the strongest performer against a weaker greenback at the close of European trade with an advance of 0.81% on the session. The Bank of Japan held interest rates at zero to 0.1% as expected overnight with the central bank refraining from further monetary easing. In a statement released after the two-day policy meeting, the BoJ cited that domestic demand remains firm with Governor Massaki Shirakawa noting that Japan’s market is the most stable among the developed nations. The statement did however warn of impending strains from the ongoing crisis in Europe which continues to pose the biggest risk for the Japanese economy.

Although Shirakawa did cite concerns over persistent strength in the yen, the fact that the BoJ held back from expanding its balance sheet, further fueled the yen’s recent advance with the USD/JPY breaking back below the key 61.8% Fibonacci retracement taken from the February advance at 79.14. The pair now rests at the confluence of the 200-day moving average and former trendline resistance (grey dashed line) at 78.70. Our outlook on the USD/JPY remains weighted to the topside with the pullback now offering favorable entries around the 200DMA with stops held below the 78.6% retracement at 77.7. A breach above the confluence of channel resistance and the 61.8% extension offers further conviction on our directional bias with such a scenario eying targets at 80.10 and the 38.2% retracement at 81.05. 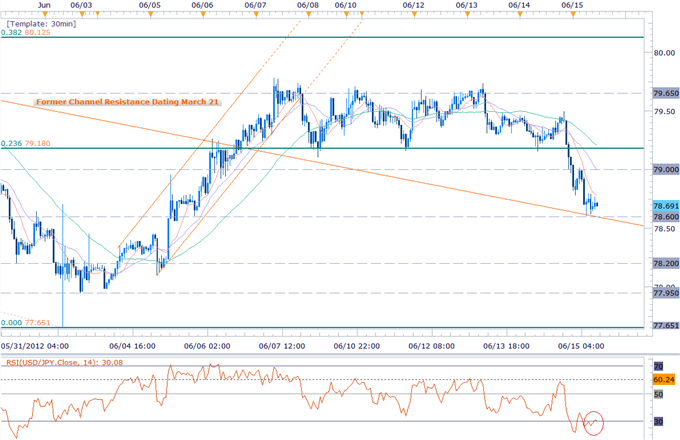 The scalp chart shows the USD/JPY testing the confluence of soft support and former channel resistance (now support) at 78.60. A break below this level risks a more substantial correction with subsequent floors seen at 78.20, 77.95, and the NFP spike lows at 77.65. Topside resistance stands at the 79-handle backed by the 23.6% retracement taken from the March decline at 79.20 and 79.65. With Japanese officials having already pledged to combat excess speculation in the yen, the downside on USD/JPY is likely to remain tempered with pullbacks offering ideal long entries. 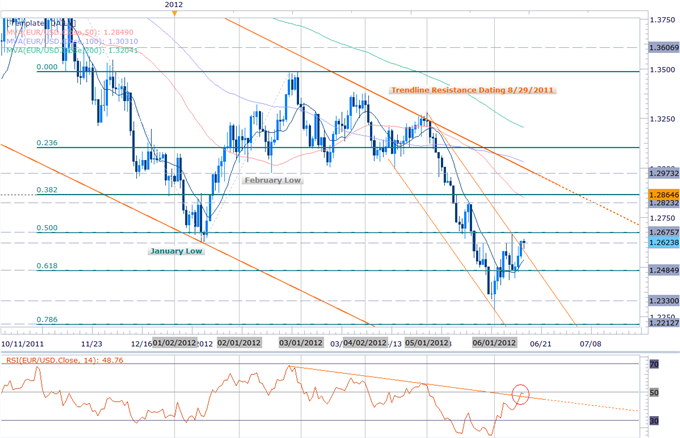 It comes of no surprise the euro is the weakest performer on the session ahead of major event risk over the weekend with key elections in Greece likely to have massive implications for the single currency moving forward. The euro has steadied ahead of the weekend with the dollar coming under pressure after G20 officials reported preparations for a global coordinated intervention should the Greek elections trigger a liquidity event amid ongoing concerns about the deepening crisis in Europe. The EUR/USD broke above channel resistance dating back to May 1st with daily resistance now eyed at the 50% Fibonacci extension taken from the October and February highs at 1.2675 backed by soft resistance at 1.2823. A breach above RSI trendline resistance confirms the break in price action with daily support now eyed at former channel resistance and is backed by the 61.8% extension at 1.2485. While out long-term bias on the euro remains weighted to the downside, we will refrain from holding any sizeable positions ahead of the weekend as developments in Greece are likely to fuel massive spikes in volatility as market participants weigh the implications for a possible euro-Greek exit. 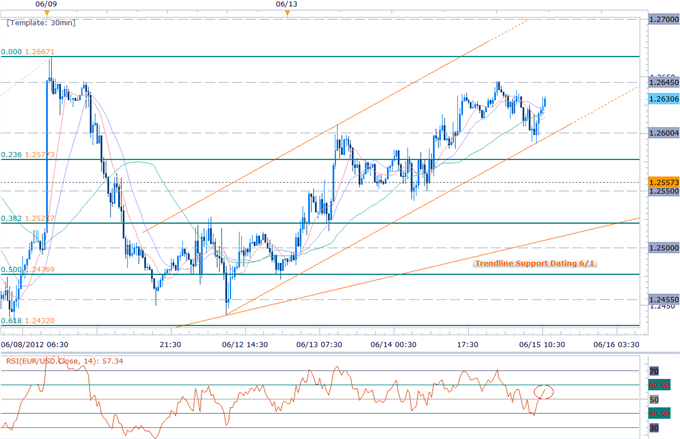 The scalp chart shows the EUR/USD trading within the confines of an ascending channel formation with the pair rebounding off channel support in early US trade. Interim resistance now stands at 1.2645 backed by the monthly high at 1.2667 (also coincides with 50% extension on the daily chart) and the 1.27-handle. A break below channel support eyes subsequent floors at the 23.6% retracement taken form the June advance at 1.2577, 1.2550 and the confluence of trendline support dating back to June 1st and the 38.2% retracement at 1.2520. Support targets are seen lower at the 1.25-figure, the 50% retracement at 1.2475, 1.2450, and the 61.8% retracement at 1.2432.