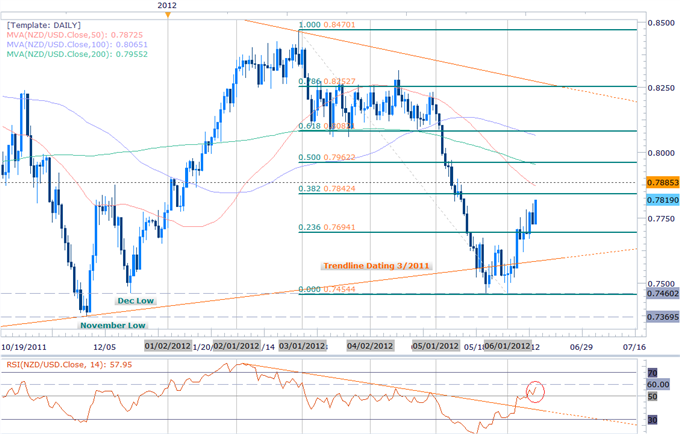 The New Zealand dollar is the top performer against the greenback at the close of European trade with an advance of 1.16% on the session. The Reserve Bank of New Zealand held interest rates as expected last night with the central bank citing that the outlook for the domestic economy has weakened since the March statement as the nation suffers from “repressed investment” amid ongoing concerns over deteriorating conditions in Europe. Kiwi price action was fairly muted on the print as Governor Bollard struck a balanced-to-slightly dovish tone for future monetary policy.

The NZD/USD remains well supported amid a rally in broader risk assets in US trade with the pair now eyeing daily resistance at the 38.2% Fibonacci retracement taken from the March decline at 7840. Daily support now rests with the 23.6% retracement at 7695 with RSI eyeing a topside break above the 60-threshold. A move above this mark bodes well for further topside advances in the kiwi and dispels further downside pressure in the interim with such a scenario eyeing subsequent topside targets. 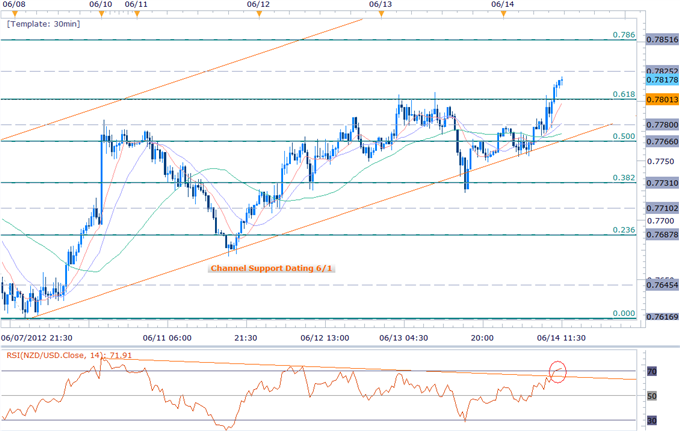 The scalp chart shows the NZD/USD trading within the confines of an ascending channel formation dating back to the start of the month with the pair breaching above the key 61.8% Fibonacci extension taken from the June 1st and 8th troughs at the 78-handle. Interim soft support is seen at 7820 backed by the 78.6% extension at 7850 and 7875. A break back below the figure eyes interim support targets at 7780 and the 50% extension at 7765 with a move below channel support risking a more substantial correction lower. Subsequent floors are seen at the 38.2% extension at 7730, 7710, and the 23.6% extension at 7690. 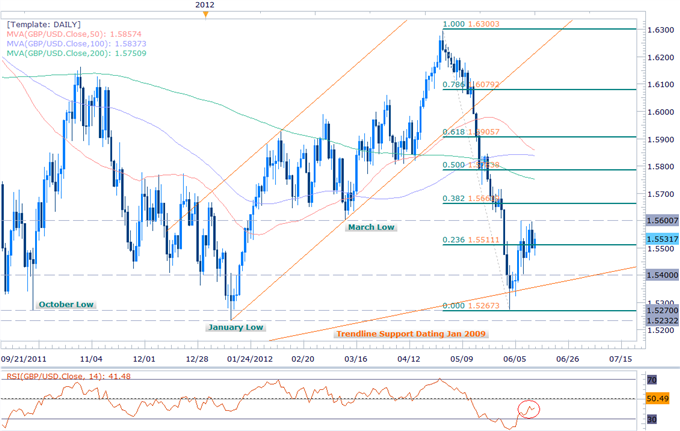 The British pound is the weakest performer for the second consecutive session with an advance of just 0.23% despite broad-based dollar weakness. As we noted yesterday, the sterling is likely to hold its recent range into the weekend as the pair continues to straddle the 23.6% Fibonacci retracement taken from the May decline at 1.5510. Soft daily support rests at the 1.54-handle backed by long-standing trendline support dating back to January of 2009 and the October lows at 1.5270. 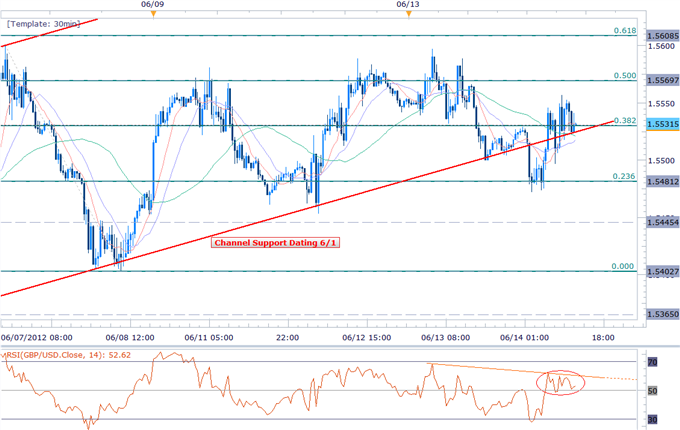 The scalp chart shows the GBP/USD holding within the confines of an ascending channel formation with the pair trading just above the 38.2% Fibonacci extension taken from the June 1st and 8th and troughs at 1.5530. A break below this confluence of channel support and the 38.2% extension exposes subsequent support targets at the 23.6% extension at 1.5480, 1.5445, and the June 8th low at the 1.54-figure. Interim topside resistance stands at the overnight highs at 1.5550 backed by the 50% extension at 1.5570 and the 1.56-handle. Look for the pair to drift sideways-to-lower into the close of trade in New York as trade continues to thin ahead of key event risk in Europe this weekend.

Join Michael on Tuesday morning for a Live Scalping Webinar