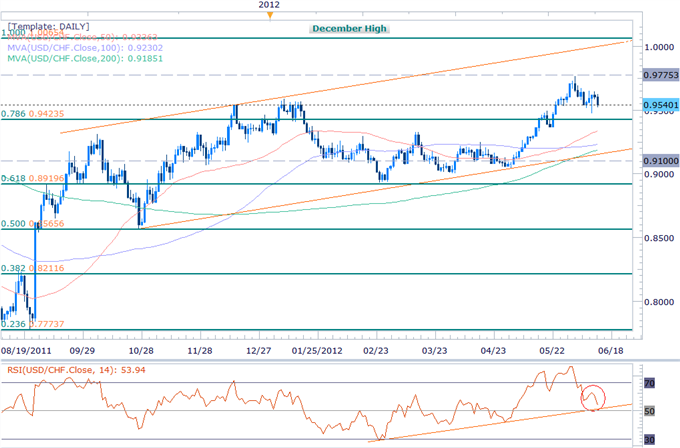 The Swiss franc is the top performing currency against a weaker greenback in US trade with the pair off 0.71% on the session. The dollar is weaker across the board, save a modest decline against the sterling, with strength in the euro lifting the franc as the single currency takes a reprieve from the recent selling pressure ahead of key elections in Greece over the weekend. Interim daily support rests with the 78.6% Fibonacci retracement taken from the decline off the December high at 9424 and is backed by the 50, 100 and 200-day moving averages ahead of channel support. Daily resistance stands at the 2012 high at 9775 with stronger resistance seen at the December highs just above parity. Our medium-term outlook on the pair remains weighted to the topside as the EUR/CHF peg continues to weigh on the franc. Only a downside breach below channel support would invalidate our bias. 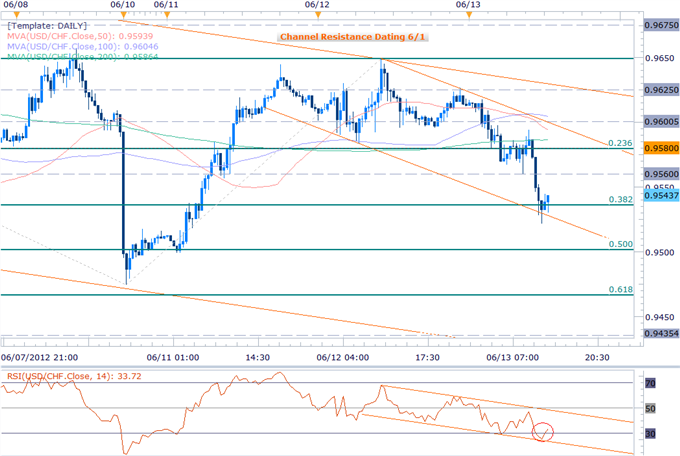 The scalp chart shows the USD/CHF holding within the confines of an embedded descending channel formation with the pair testing channel support early in the session. A break below this level eyes subsequent floors at the 50% Fibonacci extension taken from the June 1st and 12th crests at the 95-handle, the 61.8% extension at 9766 and 9435. Interim resistance stands at 9560 backed by the 23.6% extension at 9580 with a breach above channel resistance offering further conviction on our directional bias. 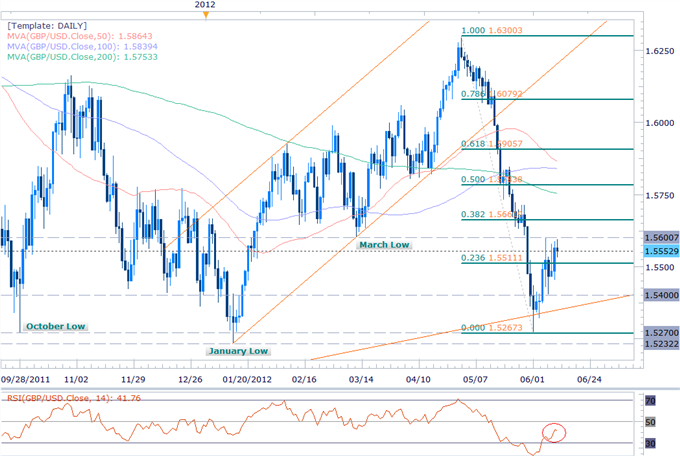 The British pound is the weakest performer on the session with a modest decline of just 0.13% despite broad-based dollar losses. Increasingly dovish remarks made by MPC member Adam Posen have continued to weigh on the pound as market participants begin to weigh the probability of more easing from the Bank of England. In light of the recent comments by Mr. Posen, there's growing speculation that the meeting minutes on tap for next week will show a 7-2 split within the MPC and topside advances in the pound may remain limited in the near-term.

The GBP/USD continues to hold just below the March low at the 1.56-figure after rebounding off of long-standing trendline support dating back to January of 2009. Daily support rests with the 23.6% retracement taken form the May decline at 1.5510 and is backed by the 1.54-figure. The pair is likely to remain range bound into the close of the week liquidity thins ahead of key elections in Greece, with next week’s BoE minutes likely to offer further clarity on future monetary policy. 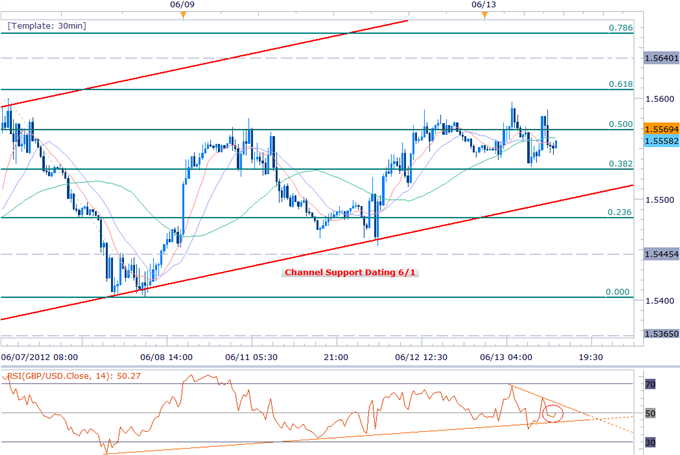 The scalp chart shows the GBP/USD trading within the confines of an ascending channel formation with the pair trading just below the 50% Fibonacci extension taken from the June 1st and 8th troughs at 1.5570. Interim support rests at the 38.2% extension at 1.5530 backed closely by channel support and the 23.6% extension at 1.5480. A breach above the 61.8% extension at 1.5610 alleviates further downside pressure in the interim with such a scenario eyeing topside targets at 1.5640 and the 78.6% extension at 1.5665 (which also coincides with the 38.2% retracement noted on the daily chart).