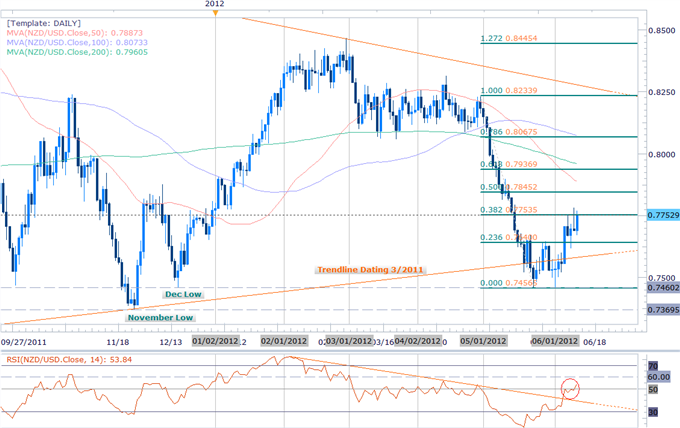 The New Zealand dollar is the strongest performer against a softer dollar for the second consecutive session with an advance of 0.85% at the close of European trade. The kiwi’s advance has gathered pace with the NZD/USD pressing daily resistance at the 38.2% Fibonacci retracement taken from the May decline at 7755. A breach above this level (on a daily close basis) eyes subsequent daily targets at the 50% retracement at 7845 and the 79-handle. Interim daily support rests with the 23.6% retracement at 7640 backed by trendline support dating back to March of 2011. Look for further advances to remain rather limited ahead of tomorrow’s RBNZ interest rate announcement with only an RSI topside break above the 60-mark opening the door to extended topside rallies in the kiwi. 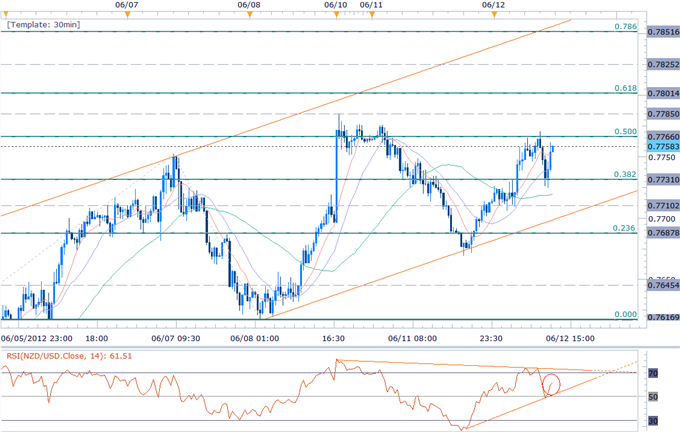 The scalp chart shows the NZD/USD continuing to hold within the confines of a well-defined ascending channel formation dating back to June 1st with the pair rebounding off channel support in after-hours trading yesterday before encountering resistance at the 50% Fibonacci extension taken from the June 1st and 8th troughs at 7765. Subsequent topside targets are seen at 7785, the 61.8% extension at the 78-figure, and 7825. Interim support rests with the 38.2% extension at 7730 backed by channel support (7710) and the 23.6% extension at 7688. A break below the overnight low at 7670 dispels further dollar losses with such a scenario eyeing targets at 7645 and the 7615. 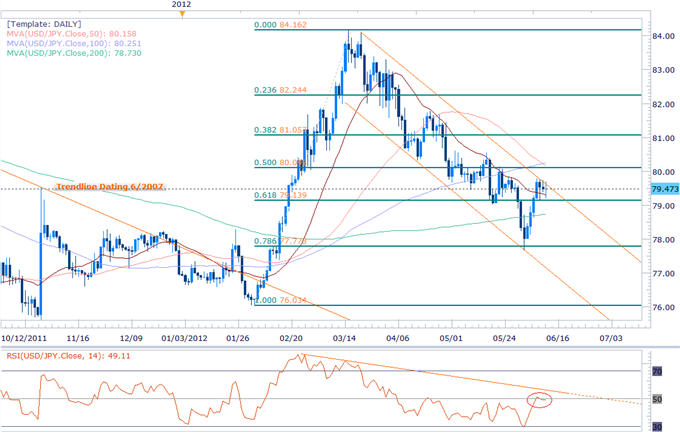 The Japanese yen is the weakest performer at noon in New York with a modest decline of 0.10% on the session. Broader risk appetite has continued to improve with demand for the yen waning after the IMF cited that risks to Japan’s outlook has shifted to the downside on the ongoing crisis in Europe while noting that the yen remains overvalued from a “medium-term perspective.” Officials also recommended further easing in monetary policy with further reforms needed for Japan to meet its 2% growth goal. While the remarks saw the yen come under some pressure, the USD/JPY continues to hold just below channel resistance dating back to the March 21st high. We maintain our long-term bullish bias on the pair while noting that extreme bouts of risk aversion are likely to keep the pair under pressure as a constant stream of troublesome headlines continues to pour out of Europe.

A breach above channel resistance eyes initial targets at the 50% Fibonacci retracement taken from the February advance at 80.10 and is backed closely by the 50 and 100-day moving averages at 80.15 and 80.25 respectively. A break below daily support at the key 61.8% retracement at 79.15 dispels further dollar advances in the interim with such a scenario eyeing support targets at the 200-day moving average at 78.73 and the 78.6% retracement at 77.75. We favor fresh long entries between these levels targeting 80.10 and 81.05. 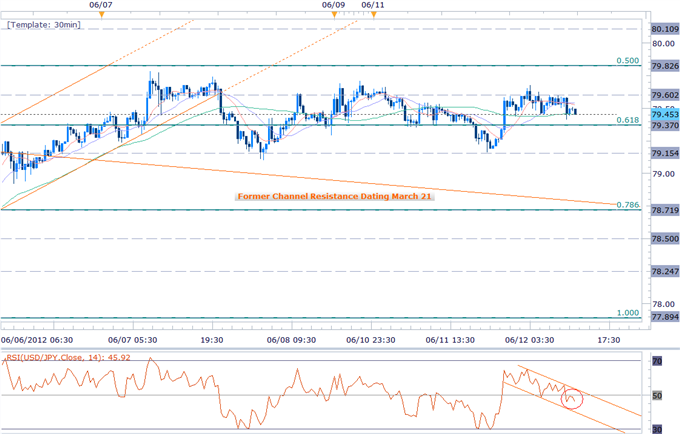 The scalp chart shows the USD/JPY holding a tight range between 79.15 and 79.80 for the past three sessions with slight RSI divergence suggesting the downside may remain well supported into the close of US trade. Soft interim resistance stands at 79.60 with subsequent targets seen at the 50% Fibonacci extension taken from the March 14th and April 20th crests at 79.80 and our initial objective at 80.10. A break back below the 61.8% extension at 79.40 eyes subsequent floors at 79.15, the 78.6% extension at 78.70 and 78.50.