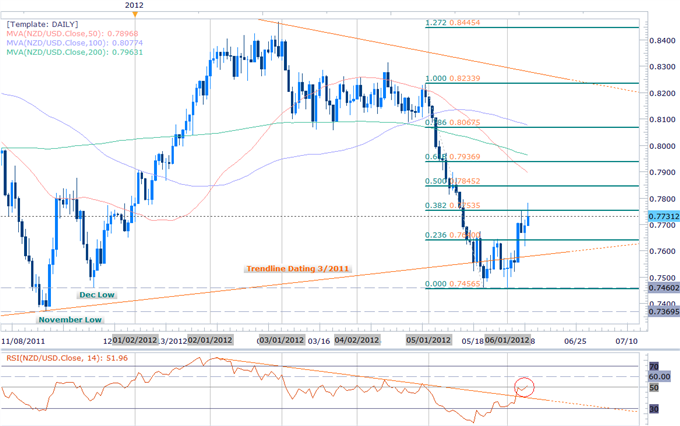 The New Zealand dollar is the strongest performer against a softer dollar ahead of the European close with and advance of 0.47% on the session. While news of a €100 billion bailout for Spain’s banking system has kept broader risk appetite afloat in the interim, the rally is likely to quickly fade as the nation now faces €36 billion in funding obligations this year, an amount this is expected to rise as growth prospects and unemployment continue to deteriorate.

Although the initial surge in risk currencies at the Sunday Asia open has faded considerably, the NZD/USD has remained rather well supported with the pair now holding just below daily resistance at the 38.2% Fibonacci retracement taken from the May decline at 7754 after briefly climbing as high as 7785. Daily support rests with the 23.6% retracement at 7640 and is backed by trendline support dating back to March 2011. Look for advances to remain limited in the interim with only an RSI topside break above the 60-mark opening the door to further topside advances in the kiwi. 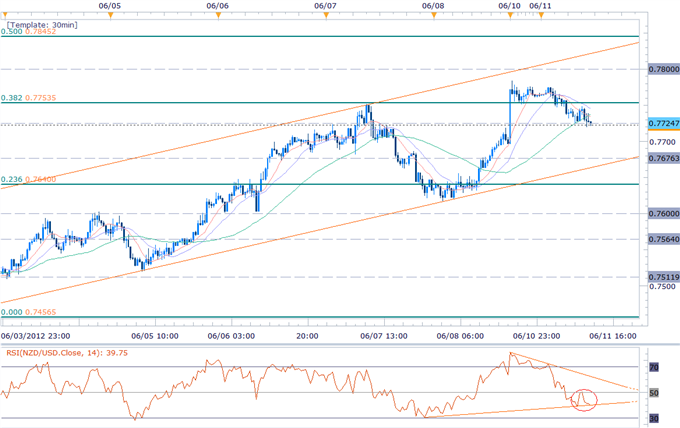 The scalp chart shows the NZD/USD holding within the confines of a well-defined ascending channel formation dating back to June 1st with the pair now testing soft support at 7725. Look for this level to give way should today’s risk rally come under further pressure with subsequent support targets eyed at 7675, the 23.6% Fibonacci retracement at 7640, and the 76-handle. Interim resistance stands with the 38.2% retracement at 7754 and is backed by the 78-figure and the 50% retracement at 7845. Again, look for the pair to come under pressure later in the session as markets continue to pare early gains. 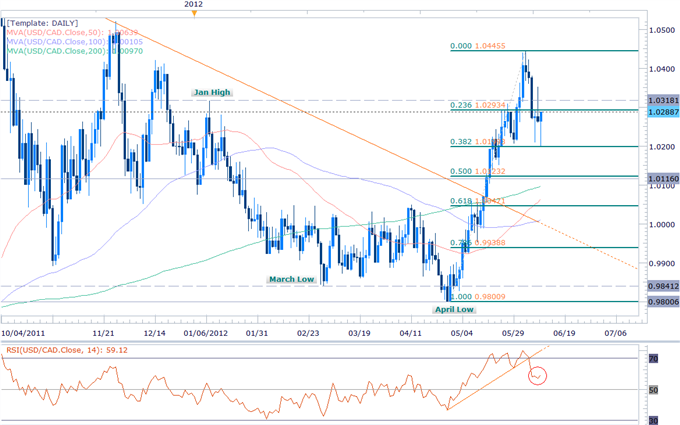 The Canadian dollar is the weakest performer against the greenback in at 11AM in New York with a decline of 0.08% on the session. The losses come on the back of a broad reversal in risk trends early in the session as the stocks turned negative and the euphoria of a Spanish bailout quickly faded. The USD/CAD rebounded sharply off daily support at the 38.2% Fibonacci retracement taken from the May advance at the 1.02-handle before encountering daily resistance at the 23.6% retracement at 1.0293. Note that an RSI break below the 50-mark offers further conviction on a more substantial correction in the loonie with subsequent daily support seen at the 50% retracement at 1.0123. 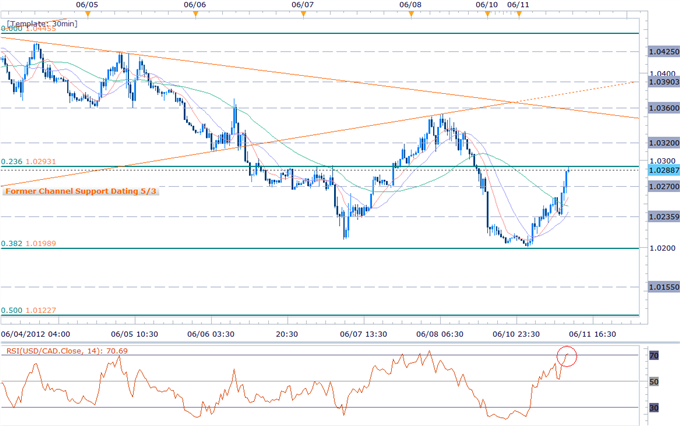