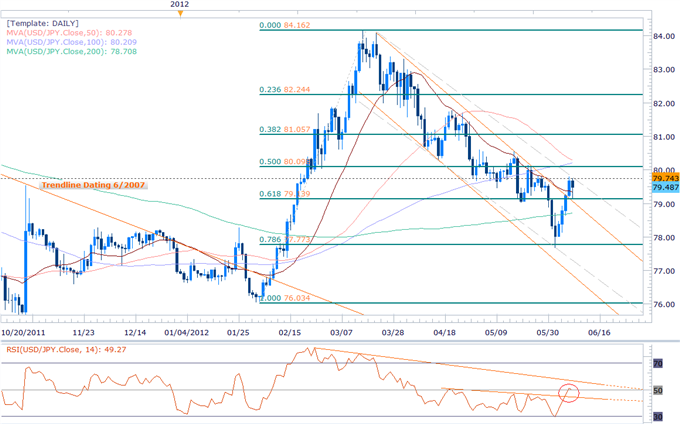 The Japanese yen is the top performer against a stronger dollar in early US trade with an advance of 0.18% on the session. Equity markets slumped in the overnight session as European concerns came back into focus with the S&P trimming the biggest weekly advance since December. As we noted earlier in the week, risk-off flows will tend to weigh on the USD/JPY as positive real interest rates in Japan increase the appeal of the yen as store of wealth during times of crisis. Stocks rebounded early in the session however with all three major indices trading in the black at 11AM in New York, alleviating further downside pressure on the pair which rebounded off daily support at the key 61.8% Fibonacci extension taken from the February advance.

We have maintained our long position from last week with the breach above channel resistance offering further conviction on our directional bias. Initial objectives are now eyed at the confluence of the 100-day moving average and the 50% retracement at 80.10 backed by the 38.2% retracement at 81.05, with our stops now held just below the key 61.8% retracement at the 79-figure. Note that a closer look at the encompassing structure sees the possibility for the pair to be trading within the confines of an offset channel (dashed grey) with a breach above 79.75 confirming the topside break of our initial channel formation (in red). 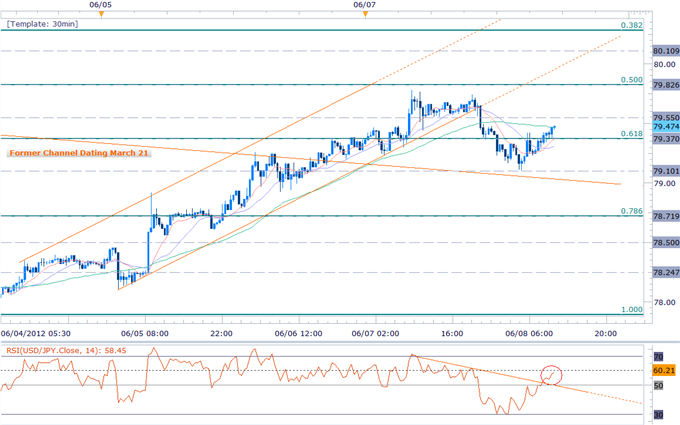 The scalp chart shows the USD/JPY rebounding off support at 79.10 (61.8% retracement on our daily chart above) before breaking back above the 61.8% Fibonacci extension taken from the March 15th and April 20th crests at 79.40. This level now serves as interim support and is backed by former channel resistance (now support) dating back to March 21st. Interim resistance stands at 79.55 with subsequent topside targets eyed at the 50% extension at 79.80, 80.10, and the 38.2% extension at 80.30. Note that RSI has recently cleared trendline support with a breach above the 60-mark further supporting the pairs advance. 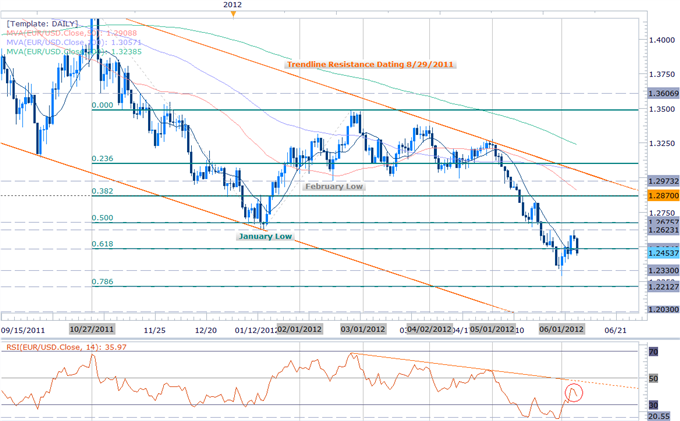 The euro is the weakest performer against the dollar with a decline of 0.84% at the close of European trade. The EUR/USD is currently probing below the confluence of the 10-day moving average and the 61.8% Fibonacci extension taken from the October 27th and February 24th crests at 1.2480. A close below this level eyes soft support at 1.2330 backed by the 78.6% extension at 1.2215. Key topside resistance stands with the January lows (which we rebounded sharply off yesterday) at 1.2623 backed closely by the 50% extension at 1.2675. Note that while our long-term bias remains weighted to the downside further topside advances in the near-term remain within the realm of possibilities as risk appetite improves with seasonality trends suggesting that downside pressure may be limited in the days to come. Note that an RSI topside breach above trendline resistance puts us on the sidelines with only a break above the 38.2% extension in the exchange rate at 1.2870 negating our bias in the interim. 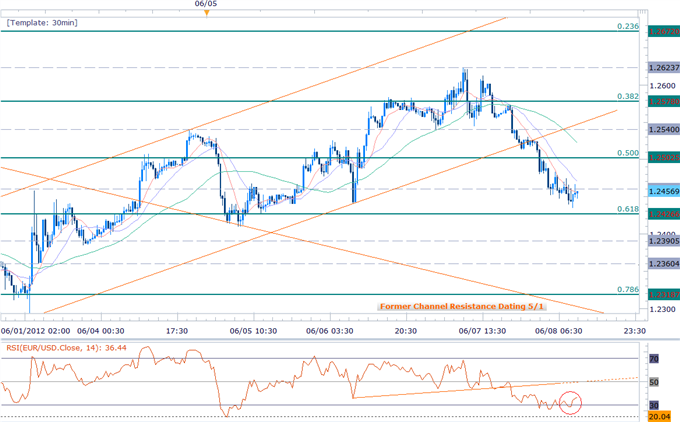 The scalp chart shows the EUR/USD breaking below short-term channel support before reversing course just ahead of the 61.8% Fibonacci extension taken from the May 1st and 21st crests at 1.2425. Note that an RSI breach above former trendline support eyes topside targets at the 50% extension at the 1.25-figure, 1.2540, and the confluence of former channel support and the 38.2% extension at 1.2580. A break below interim support eyes subsequent soft targets at 1.2390, 1.2360, and the 78.6% extension at 1.2320.