USDJPY Advanced to Tapper Off - Staying Long From 78.27 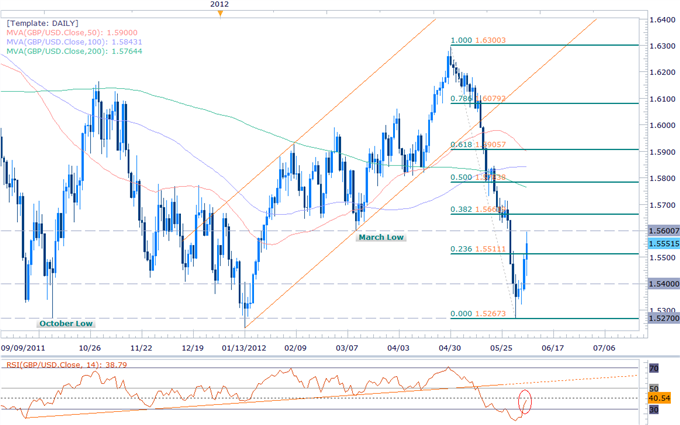 The British pound is the top performing currency against a mixed dollar with an advance of 0.35% at the close of European trade. The Bank of England held the benchmark interest rate at 0.50% today as expected with the sterling getting some lift as broader market sentiment continues to improve. While we do not expect any further easing from BoE, it will be interesting to see the whether the vote count continues to reaffirm an 8-1 split with the minutes from today’s meeting set to be released on June 20th.

The GBP/USD broke above the 23.6% Fibonacci retracement of the May decline at 1.5510 before encountering resistance at the former March lows, just shy of the 1.56-handle. A breach above this level eyes subsequent daily resistance targets at the 38.2% retracement at 1.5660 with daily support now at 1.5510. Note that RSI is now back above oversold territory with a breach above the 50-mark offering further conviction on a continued sterling rally. 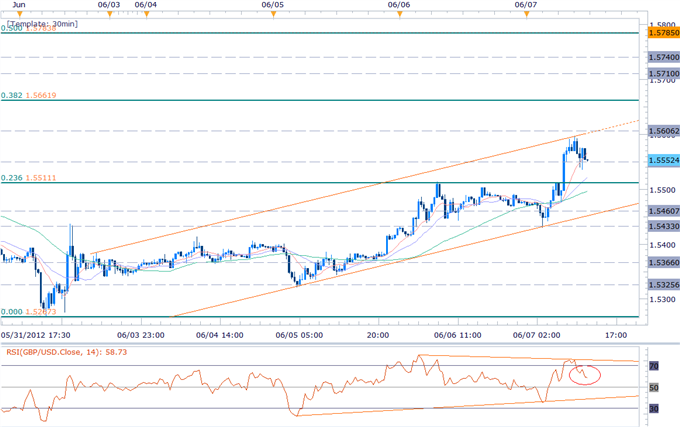 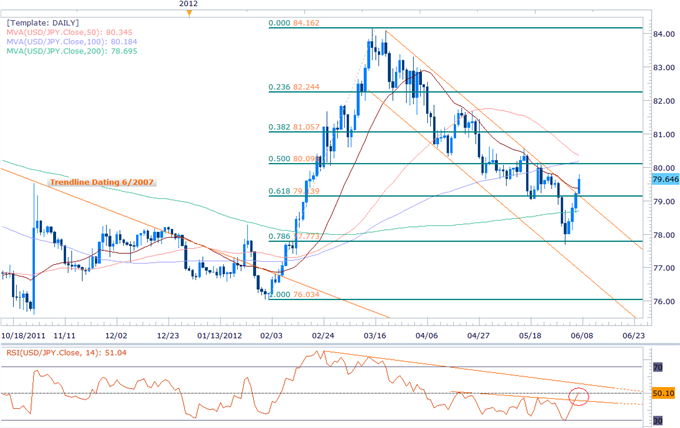 The Japanese yen is the weakest performer against the dollar with a decline of 0.59% on the session. The USD/JPY continued its advance for a fourth consecutive session with the pair breaching key resistance in overnight trade at the confluence of the 61.8% Fibonacci retracement taken from the March decline and channel resistance at 79.14. We have maintained our long position from last week targeting limits at 79.14 (which triggered yesterday) and the confluence of the 100-day moving average and the 50% retracement at 80.10, with our stops now held just below the 79-figure. Extended targets are eyed at the 38.2% retracement at 81.05 and 82.25. Note that RSI confirmed the breach with a move above trendline resistance dating back to the April 20th high with the oscillator poised for a topside break above trendline resistance dating back to the February highs. Such a scenario offers further conviction on our bullish directional bias. 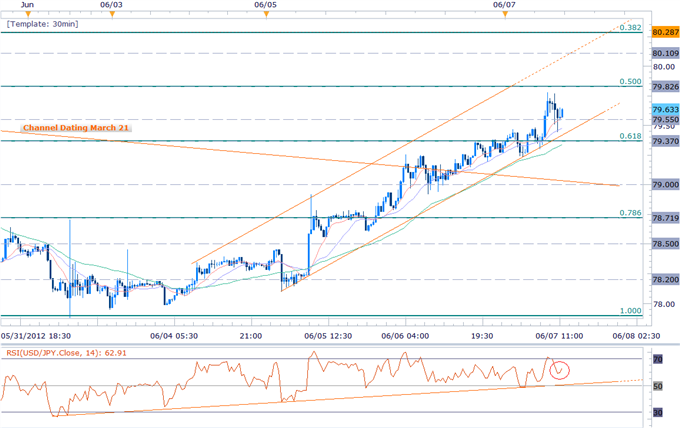 The scalp chart shows the USD/JPY trading within the confines of an ascending channel formation after breaching above channel resistance dating back to March 21st. Interim topside resistance stands at the 50% Fibonacci extension taken from the March 15th and April 20th crests at 78.80 with subsequent resistance targets eyed at 80.10, the 38.2% extension at 80.30 and 80.55. Interim support rests with the 61.8% extension at 79.40 backed by the 79-figure and the 78.6% extension at 78.70. A break below channel support negates our interim bias with and RSI break below the 50-mark suggesting a more substantial pullback may be underway. Note that the pair is likely to remain well supported so long as risk appetite remains buoyed with a fresh move into risk-aversion likely to weigh heavily on the pair.