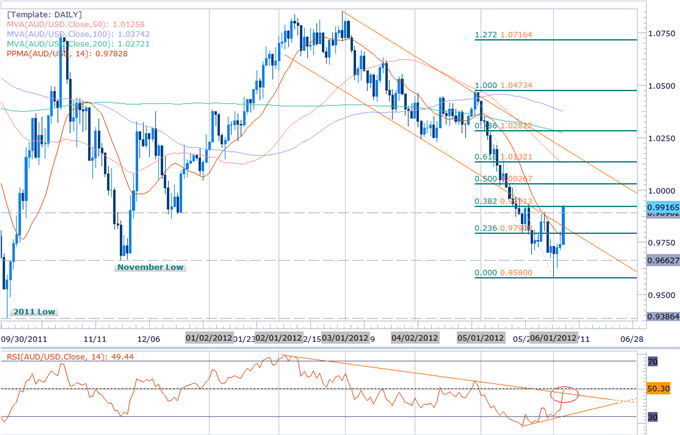 The Australian dollar is the top performer against a weaker greenback for the second consecutive session with an advance of 1.87% on the session. A broad-based rebound in risk appetite and stronger-than-expected GDP data released overnight fueled a substantial rally in the aussie with the pair posting its largest single day advance since December 20th. Last night’s 1Q GDP print topped even the most ambitious estimates with a print of 4.3% y/y, besting calls for a read of just 3.3% y/y, with the quarter on quarter read more than doubling estimates for a print of 1.3%.

The AUD/USD broke through daily resistance at the 23.6% Fibonacci retracement taken from the April 30th decline at 9790 before encountering resistance at the 38.2% retracement at 9920. As noted in yesterday’s report, “Key resistance stands at the confluence of former channel support (now resistance) and the 100% Fibonacci extension taken from the February and April highs at 9840 and as such, we reserve this levels as out topside limit which if compromised negates further downside pressure in the interim.” Note RSI looks poised for a close above trendline resistance dating back to the February highs, with such a scenario offering further conviction on a directional bias. 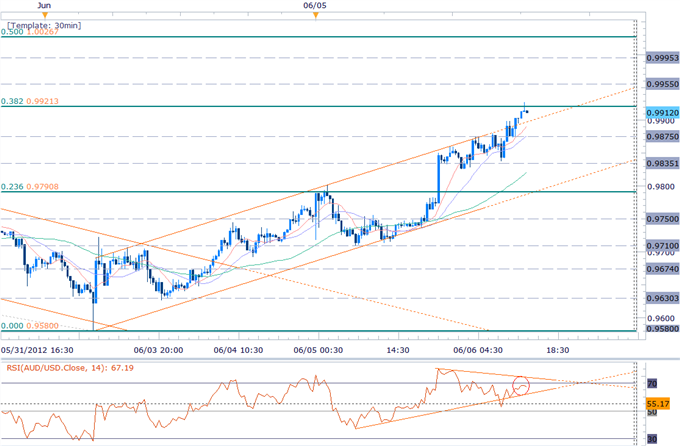 The scalp chart shows the AUD/USD trading attempting a topside break of a short-term ascending channel formation off the 2012 low before halting its advance at the 38.2% retracement at 9920. A breach above this level eyes subsequent topside targets at 9955, 9995 and the 50% retracement at 1.0025. Soft interim support rests at 9875 backed by 9835 and the 23.6% retracement a 9790. Only a break below 9710 would dispel further downside pressure in the interim with such a scenario eyeing the November lows at 9660. Look for the aussie to remain well supported into the close with a continued rally in risk-assets likely to keep the pair afloat in the interim. 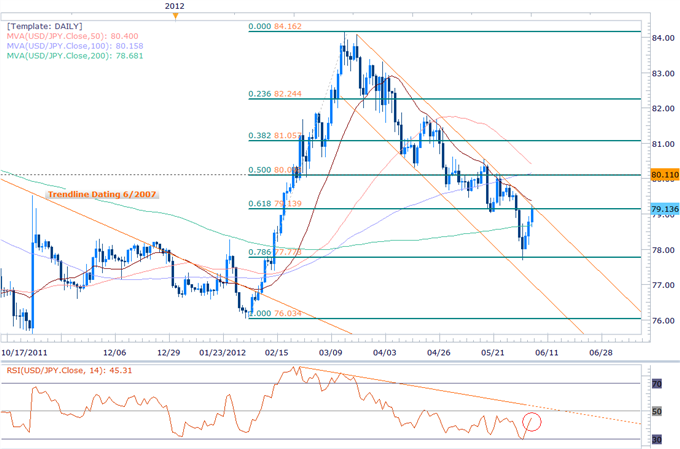 The Japanese yen is the weakest performer against the dollar with a decline of 0.37% on the session. The USD/JPY continued its advance for the third consecutive session with the pair pressing key resistance at the confluence of the 61.8% Fibonacci retracement taken from the March decline and channel resistance at 79.14. We have maintained our long position from last week targeting limits at 79.14 (which triggered today) and the confluence of the 100-day moving average and the 50% retracement at 80.10, with our stops held just below the 78.6% retracement at 77.75. Extended targets are eyed at the 38.2% retracement at 81.05. Note that RSI remains poised for a topside break above trendline resistance dating back to the February highs, with such a scenario offering further conviction on our bullish directional bias. 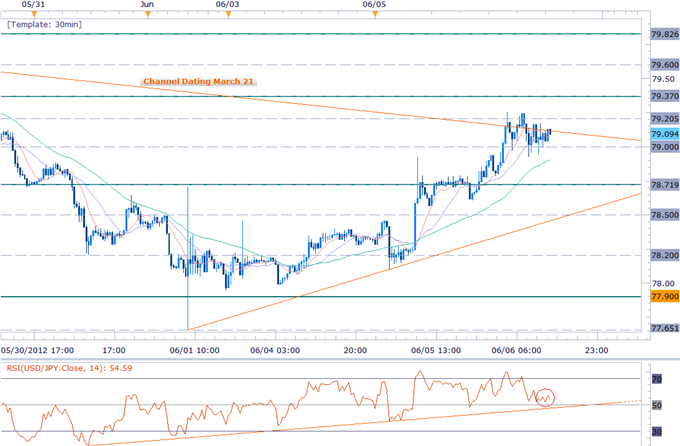 The scalp chart shows the USD/JPY testing channel resistance dating back to March 21st with break above soft support at 79.20 eyeing topside targets at the 61.8% extension taken from the March 15th and April 20th crests at 79.40, 79.60, and the 50% extension at 79.83. A breach above our initial objective at 80.10 eyes subsequent extended targets at the 38.2% extension at 80.30 and 80.55. Interim support rests at the 79-handle and is backed by the 78.6% extension at 78.70. A break back below short-term trendline support risks further losses with subsequent floors seen at 78.20 and the 100% extension at 77.90. Note that the pair is likely to remain well supported so long as risk appetite remains buoyed with a fresh move into risk-aversion likely to weigh heavily on the pair.