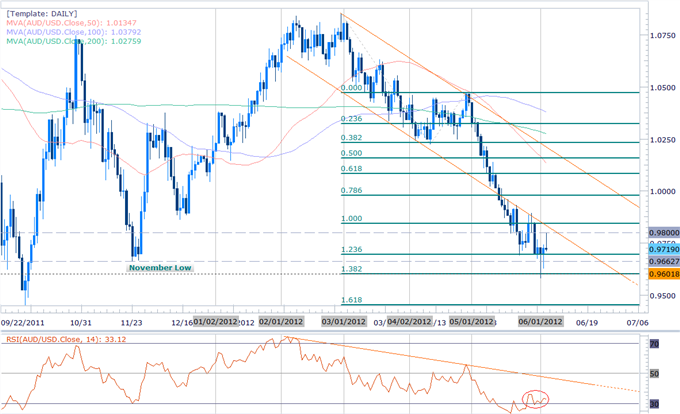 The Australian dollar is the top performer against a stronger greenback in late US trade with a decline of just 0.02% on the session. The Reserve Bank of Australian slashed the benchmark interest rate by 25basis points to 3.50% overnight with the accompanying policy statement offering no clear guidance on future monetary policy while citing “modest growth continued in the first part of 2012 with significant variations across sectors.” The central bank also explicitly noted growing uncertainties with regards to the deepening crisis in Europe with the outlook for inflation allowing for “more accommodative stance of monetary policy.” With Credit Suisse overnight swaps factoring in a 63% chance of a 50basis point cut, the surprise cut of just 25 supported the aussie in the moments following the print with dollar strength throughout the European and US sessions limiting aussie advances in the interim.

A look at the encompassing structure sees the AUD/USD reversing sharply after tagging soft resistance at the 98-figure. Key resistance stands at the confluence of former channel support (now resistance) and the 100% Fibonacci extension taken from the February and April highs at 9840 and as such, we reserve this levels as out topside limit which if compromised negates further downside pressure in the interim. A break back below the 123.6% extension at the 97-handle targets the November lows at 9660 and the 138.25 extension at the 96-figure. 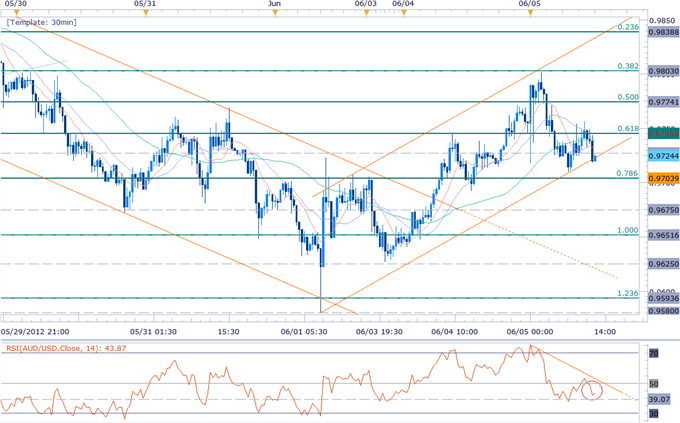 The scalp chart shows the AUD/USD trading within the confines of a short-term ascending channel formation with the pair currently testing channel support at 9725 late in the session. Interim topside resistance stands at the 61.8% Fibonacci extension taken from the May 22nd and 29th crests at 9745 backed by the 50% extension at 9775 and the 38.2% extension at 9800. Should RSI breach above trendline resistance taken from the overnight highs, look to target topside levels with a breach above the 23.6 extension (coincides with the 100% extension on the daily chart) at 9840 offering further conviction on continued aussie advances in the days ahead. A break below this channel formation dispels further aussie losses with such a scenario eyeing support targets at the 97-figure, 9675, and the 100% extension at 9650. Look for the pair to remain rather well supported in to the close as equity markets remain poised to close modestly higher on the session. While our medium-term bias remains weighted to the downside, we remain on the sidelines here with a rally in the aussie offering more favorable entry points higher. Note that 1Q GDP data out overnight could spark added volatility with consensus estimates calling for a print of 3.3% y/y. 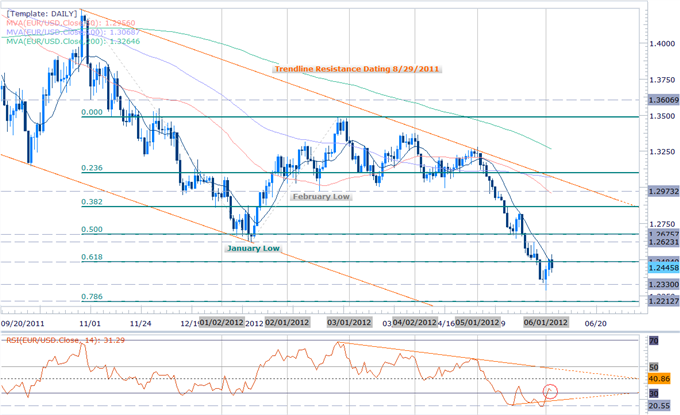 The euro is the weakest performer against the dollar with a decline of more than 0.43% on the session. The EUR/USD continues to straddle the 61.8% Fibonacci extension taken from the October and February highs at 1.2485 (last month’s objective target) with key daily resistance seen at the former January lows at 1.2623 backed closely by the 50% extension at 1.2675. Soft daily support remains at 1.2330 with our medium-term objective eyed at the 78.6% extension at 1.2215. Note that RSI has now broken back above oversold territory with a break above the 40-mark suggesting a more substantial correction may be underway. 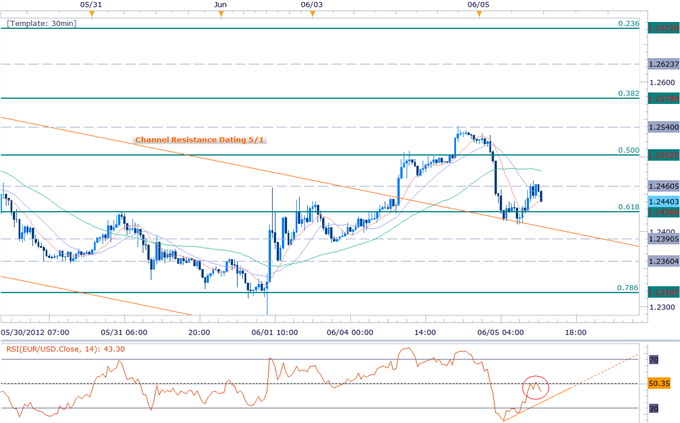 The scalp chart shows the euro reversing off soft resistance at the 1.2460 mark after breaching above channel resistance dating back to the first of May. Again here, we look for the downside to remain somewhat limited in the interim as markets rebalance with the rebound off former channel resistance suggesting further topside advances may be in the cards. An RSI breach above the 50-mark, eyes topside targets at the 50% Fibonacci extension taken from the May 1st and 21st crests at the 1.25-handle, 1.2540 and the 38.2% extension at 1.2578. A break below interim support at the 61.8% extension eyes soft support at 1.2390 backed by 1.2360 and the 78.6% extension at 1.2320. For a more in-depth look at this EUR/USD setup and complete scalp targets ahead of tomorrow’s ECB interest rate announcement, refer to last week’s Scalp Report.