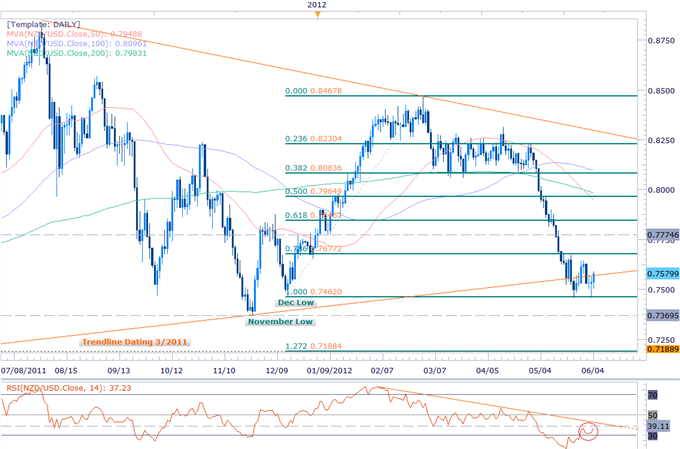 The New Zealand dollar is the top performer at the close of European trade with an advance of 0.48% on the session. The advance comes amid a choppy session in equities with US Stocks off at the open despite a rebound in European trade. The NZD/USD continues to respect the December Low at 7462 and we reserve this level as our bottom limit which if compromised risks substantial kiwi losses in the days to come. A close above former trendline support dating back to March 2011 bodes well for the kiwi with such a scenario eyeing initial targets at the 78.6% Fibonacci retracement at 7680. Note that daily RSI now looks poised for a breach above the 40-mark with a close above trendline resistance dating back to the February highs likely to see the correction gather pace. 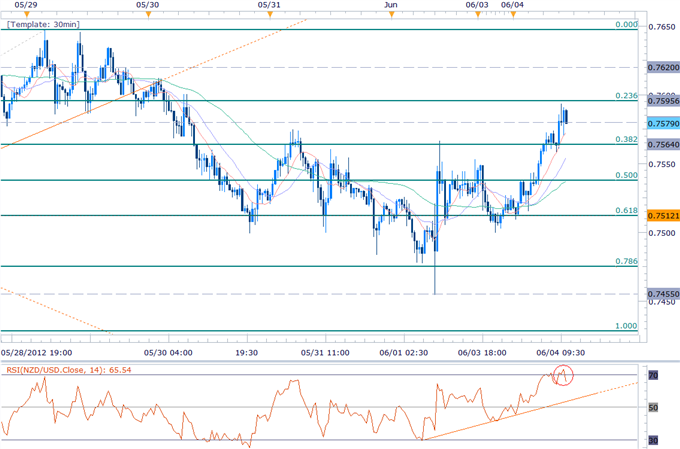 The scalp chart shows the NSDUSD resting just above soft support at 7580 after rebounding off the 23.6% Fibonacci extension taken from the May 22nd and 29th crests at 7595. Subsequent topside resistance levels are eyed at 7620, and the May 29th high at 7645, with a break here targeting 7675. Initial support comes in at the 38.2% extension at 7565 backed by 7540 and the 61.8% extension at 7510. Look for this topside correction to gather pace while noting that headlines out of Europe continue to threaten a more substantial sell-off in risk and would likely weigh heavily on the high yielding commodity bloc. 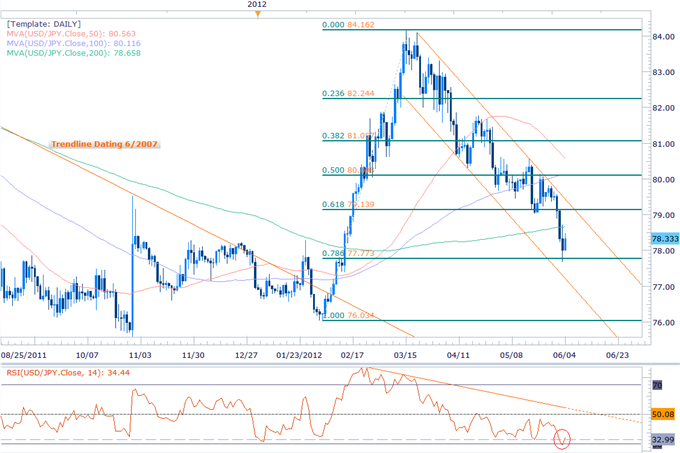 The Japanese yen is the weakest performer heading into afternoon trade in New York with the USD/JPY higher by more than 0.40% on the session. We have maintained our long position from last week with our stops held just below the 78.6% retracement taken from the February advance at 77.75. Daily resistance remains with the 200-day moving average and is backed by the 61.8% retracement at 79.10 with our initial topside target held at the 50% extension at 80.10. Note that RSI was able to hold above oversold territory with Bullish divergence suggesting the pair may look to test channel resistance over the next few sessions. 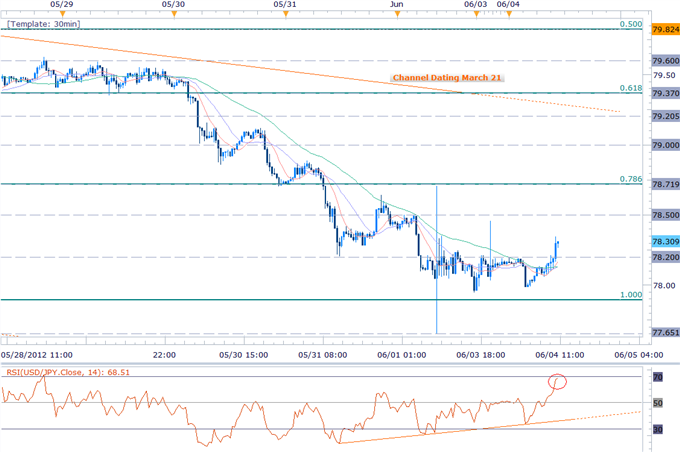 The scalp chart shows the USD/JPY breaking above interim soft resistance at 78.20 with subsequent topside resistance targets seen at 78.50 and the 78.6% Fibonacci extension taken from the March 14th and 20th crests at 78.70. A break above long standing- channel resistance dating back to March 21st at 79.20 offers further conviction on our directional bias with subsequent targets eyed at the 61.8% extension at 79.40 and 79.60. Interim support rests with the 100% extension at 77.90 and the NFP lows put in on Friday at 77.65.