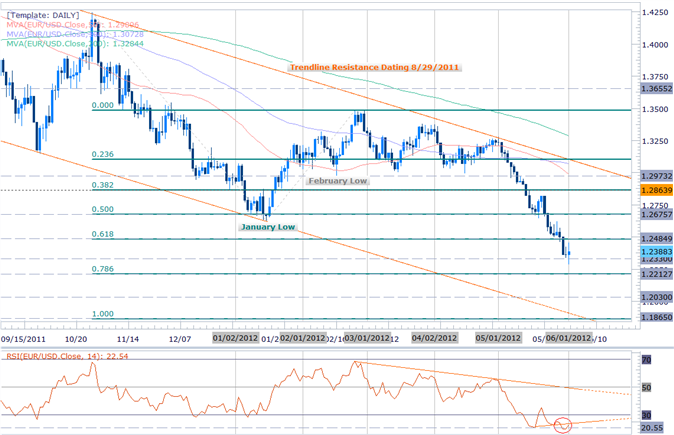 The euro is the strongest performer against the greenback at the close of European trade with an advance of 0.44% on the session. Key US employment data today grossly missed consensus estimates with non-farm payrolls coming in at just 69K while the unemployment rate rose to 8.2% from 8.1% according to the Bureau of Labor Statistics. The report fueled speculation for further Fed easing with the greenback paring early gains on the back of the print. The EUR/USD briefly dipped below soft support at the 2008 lows at 1.2330 before reversing course to trade slightly higher on the session. Topside daily resistance stands at the 61.8% Fibonacci extension taken from the October and February crests at 1.2485 and is backed closely by the January lows at 1.2620. Downside objectives are now held at the 78.6% extension at 1.2215. 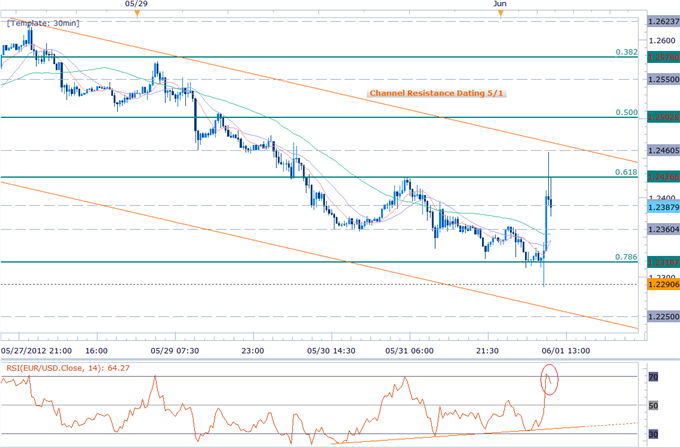 The scalp chart shows the EURUSD continuing to trade within the confines of a descending channel formation dating back to the start of May with the pair holding just below the 61.8% Fibonacci extension taken from the May 1st and 21st crests at 1.2425. Soft support rests at 1.2360 backed by the 78.6% extension at 1.2320 and channel support. A break below this formation risks substantial losses for the euro with subsequent floors seen at 1.2250 and the 100% extension at 1.2185. Topside advances remain capped by channel resistance (currently around 1.2460) with a breach above this trendline eyeing targets at the 50% extension at the 1.25-figure, 1.2550, and the 38.2% extension at 1.2575. While our medium-term outlook on the single currency remains weighted to the downside, it’s important to note that a correction of some magnitude remains within the realm of possibilities with a move above 1.2485 (61.8% Fib ext on daily chart) offering further conviction on an interim directional bias. For a complete outlook on the EUR/USD including detailed scalp targets, refer to this week’s Scalp Report. 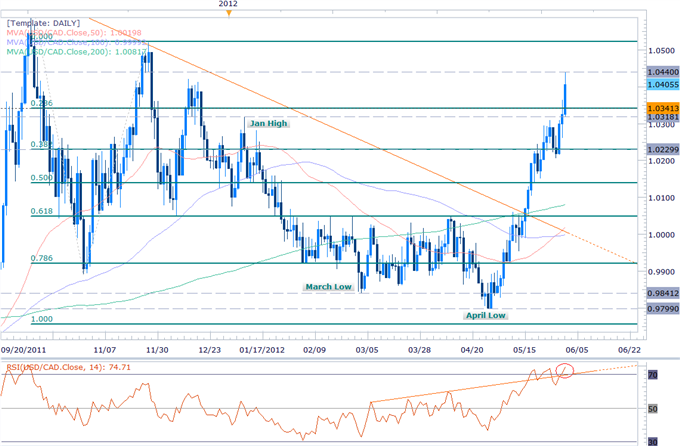 The Canadian dollar is the weakest performer at noon in New York with a decline of more than 0.45% on the session. Weaker than expected GDP data out of Canada and persistent weakness in crude prices saw the loonie come under substantial pressure today, with the USD/CAD breaking above 23.6% Fibonacci extension taken from the October and November highs at 1.0345 before encountering soft resistance at 1.0440. Our medium-term objective on the pair remains the November highs just above the 1.05-figure with a pullback of some magnitude likely after advancing eleven of the past fourteen sessions on a breach above the confluence of the 200-day moving average and trendline resistance dating back to the October highs. Note that although the daily relative strength index remains in over-bought territory above 70, the oscillator has yet to test the highs made back in October when the USD/CAD made fresh yearly highs above the 1.06-handle. 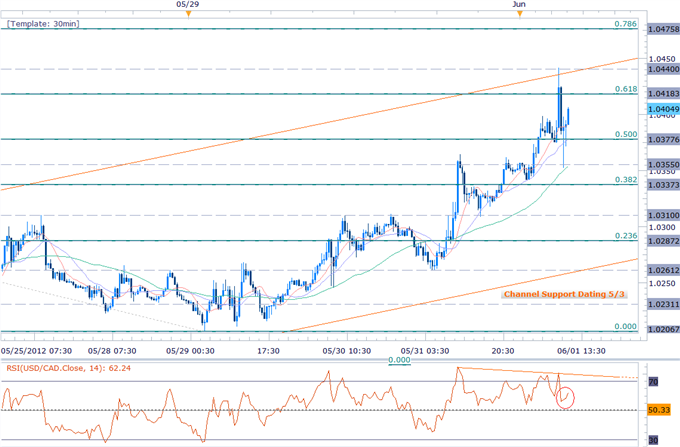 The scalp chart shows the USD/CAD holding within the confines of an ascending channel formation after testing channel resistance early in the session. Interim support rests at the 50% Fibonacci extension taken from the May 11th and 29th troughs at 1.0375 backed by 1.0350, the 38.2% extension at 1.0335 and 1.0310. A break below the confluence of the 23.6% extension and channel support at 1.0285 risks a more substantial correction for the pair with such scenario eyeing targets at 1.0260 and this week’s low at 1.0206. Interim resistance stands at the 61.8% extension at 1.0420 and is backed by channel resistance, currently around 1.0440.

For more information on his strategy, refer to Michael’s Introduction to Scalping for Beginners Webinar