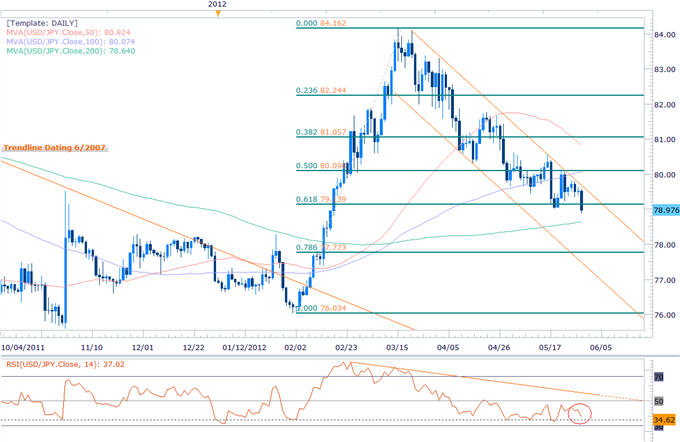 The Japanese yen is the strongest performer against the dollar for a second consecutive session with the USDJPY off by more than 0.66% on the session. A bout of risk aversion has dominated trade today with global equity markets off sharply, stoking demand for safety in the yen and the greenback. The dollar is stronger against all its major counterparts save the yen as investors continue to jettison higher yielding so called “risk” assets. Weaker than expected US pending home sales exacerbated the decline with the data showing sales contracted by 5.5% in April, missing calls for a flat read of 0.0%. As we noted in yesterday’s Winners/Losers report, “Our long-term outlook on the USD/JPY remains weighted to the topside here with favorable entries eyed between the 200-day moving average at 78.65 and the 61.8% Fibonacci retracement taken off the February advance at 79.10. Note that we will also be looking to add to longs with a topside break of the descending channel formation and the confluence of the 100-day moving average and the 50% retracement at the 80-figure.” 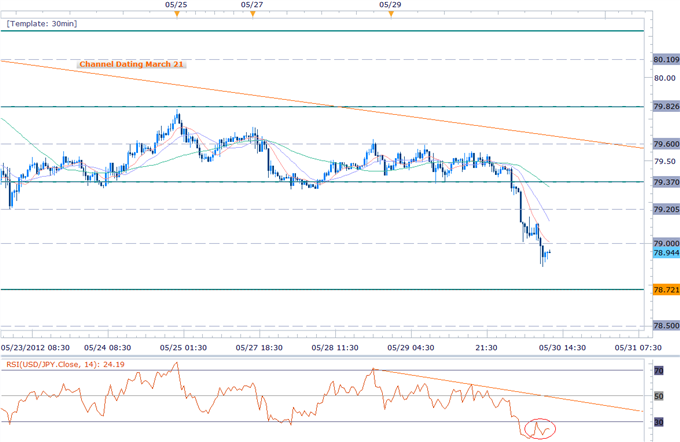 The scalp chart shows the USD/JPY breaking below the 61.8% Fibonacci extension taken from the March 14th and April 20th crests at 79.35 in early European trade with the pair currently holding just below soft interim resistance at the 79-figure. Subsequent ceilings are seen at 79.20, the 61.8% extension at 79.35 and channel resistance at 79.60 with a breach here putting our topside targets at 80.10 and the 81-handle in play. Interim support rests with the 78.6% extension at 78.70 and 78.50. A break below this level invalidates our short-term bias with such scenario risking a decline to the 78-figure. 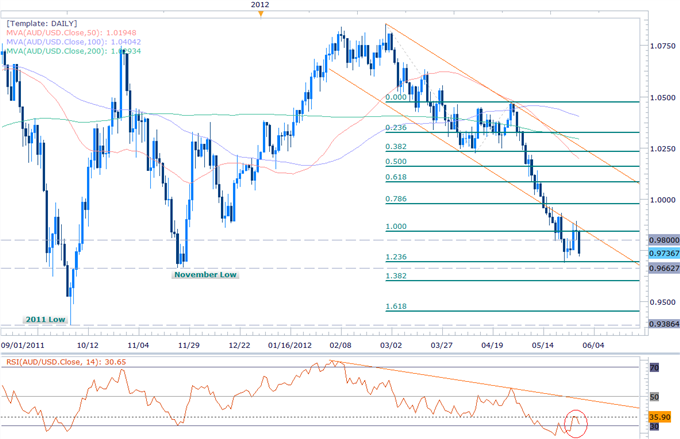 The Australian dollar is the weakest performer against the greenback with a decline of more than 1.15% on the session. Classic haven flows have continued to weigh heavily on the aussie with last night’s retail sales print adding to the downside pressure after the report showed sales contracting by 0.2% for the month of April, missing calls for a read of +0.2%. The AUD/USD pulled back away from key resistance at the 100% Fibonacci extension taken from the February 29th and April 27th crests at 9845. The initial aussie objective remains the 123.6% extension at 9690 backed closely by the November low at 9663. We remain bearish on the pair here with only a breach above the confluence of former channel support and the 100% extension at 9845 invalidating our directional bias. 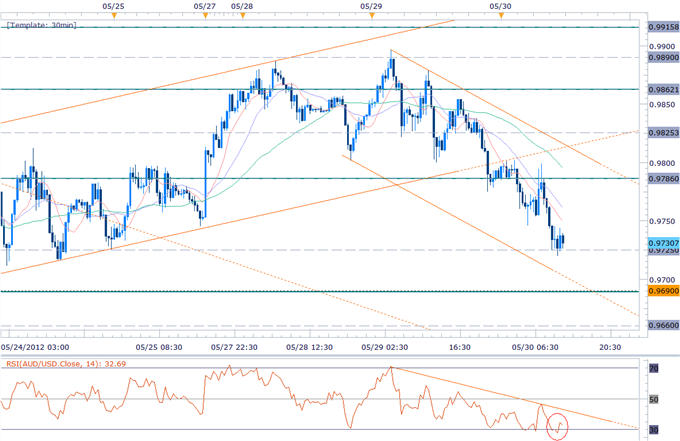 The scalp chart shows the aussie breaking below a short-term ascending channel formation before finding solace just above soft support at 9725. Subsequent support targets are seen lower at the 100% Fibonacci extension taken from the April 27th and May 10th crests at 9690. A break below this level puts our objective at 9660 in view with a continued move into risk aversion needed to facilitate the decline. Interim resistance stands at the 78.6% extension at 9785, 9825, and the 61.8% extension at 9860. Note that with the month ending tomorrow and NFPs on tap, they aussie may continue to consolidate at these levels as traders await Friday’s key employment data.