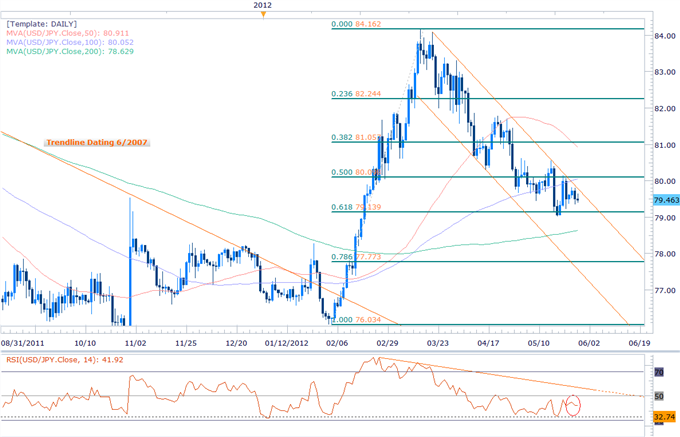 The Japanese yen is the strongest performer against a firmer dollar with the pair of by 0.2% at the close of European trade. The pair held a tight range heading into the start of US trade with equity markets taking cues off the European session to trade markedly higher at the open. Equities pared a bulk of the advance soon early in the session on news that rating agency Egan Jones had downgraded Spain’s debt rating for the second time this month too ‘B’ from ‘BB-’ while maintaining its negative outlook. The data re-kindled European contagion concerns with haven flows favoring both the dollar and the yen. Our long-term outlook on the USD/JPY remains weighted to the topside here with favorable entries eyed between the 200-day moving average at 78.65 and the 61.8% Fibonacci retracement taken off the February advance at 79.10. Note that we will also be looking to add to longs with a topside break of the descending channel formation and the confluence of the 100-day moving average and the 50% retracement at the 80-figure. Note that daily RSI currently remains below the 50-mark, with a topside breach above trendline resistance dating back to February offering further conviction on our directional bias. The scalp chart shows the USD/JPY continuing to hold just above interim support at the 61.8% Fibonacci extension taken from the March 14th and April 20th crests at 79.35 with subsequent soft floors seen at 79.20, the 79-figure and the 78.6% extension at 78.73. Such a scenario offers favorable long entries with interim topside resistance seen at the 50% extension at 79.80 backed by 80.10 and the 38.2% extension at 80.30. Look for downside pressure on the pair to ease heading into the US close with a test of channel resistance likely over the next 24-48 hours. 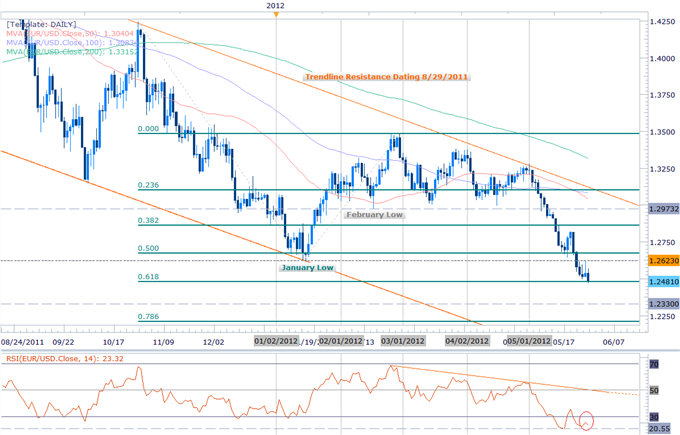 The euro is the weakest performer heading into the US close with a decline of more than 0.44% on the session. Today’s Spanish downgraded has added further downside pressure on the euro with the pair triggering our medium-term objective cited earlier this month at 1.2485. This level represents the 61.8% Fibonacci extension taken from the October and February highs and may provide some near-term support. It’s important to note that the single currency remains vulnerable to headline risk out of the region with our medium-term objective now eyed at the former 2008 lows at 1.2330 and the 78.6% extension just above the 1.22-figure. Interim daily resistance now stands at the former January lows at 1.2623 and the 50% extension at 1.2675. 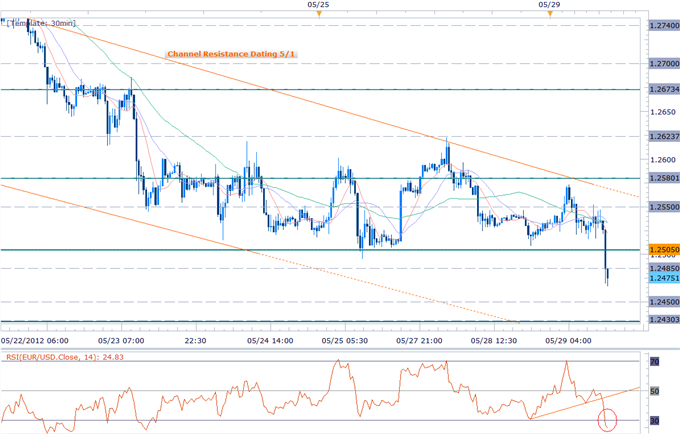 The scalp chart shows the EURUSD continuing to trade within the confines of a descending channel formation dating back to the start of May with the pair holding just below our objective at 1.2485. Subsequent floors are seen at 1.2450 and the 78.6% Fibonacci extension taken from the May 1st and 21st crests at 1.2430. A breach above interim resistance sees ceilings at the 50% extension at 1.2505, 1.2550 and the 38.2% extension at 1.2580. While we remain bearish on the euro, it’s important to note that a correction of some magnitude over the coming days may be likely as we head into the close of May trade as investors look to cover euro short-positioning.