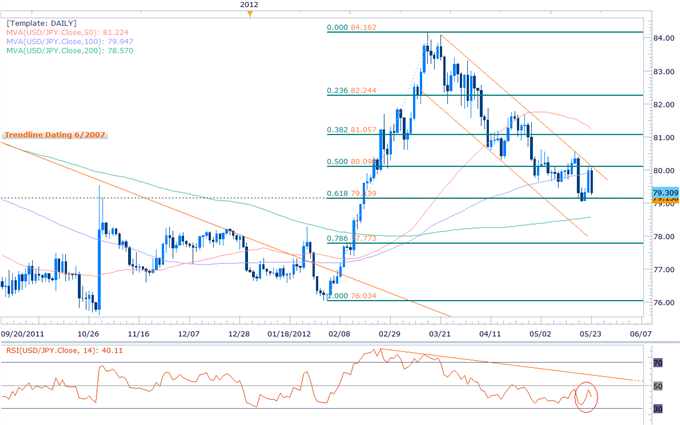 The Japanese yen is the strongest performer against the greenback with an advance of more than 0.80% at the close of European trade. The low yielder advanced against all its major counterparts as a bout of risk aversion sweeps across global equity markets with classic haven flows propping up both the yen and the US dollar. As market participants await further developments out of the EU summit in Brussels, it is becoming more probably that there will indeed be a Greek exit of the euro.

Overnight the BoJ held interest rates as expected with the central bank making no changes to its monetary policy despite ongoing concerns regarding the fragile recovery. As noted in yesterday’s Winners/Losers report, the rate decision in combination with a broader shift into risk aversion has kept the yen well supported with the USD/JPY rebounding sharply off of our medium-term objective at the confluence of channel resistance and the 50% Fibonacci retracement taken from the February advance at 80.10. Although we booked out long positions at this level, we maintain our long-term bullish bias on the pair with sharp bouts of risk aversion offering favorable entries on the USD/JPY between the 200-day moving average at 78.60 and the 61.8% retracement at 79.15. Note that we continue to eye daily RSI for a topside breach of the 50-mark for further conviction on our directional bias. 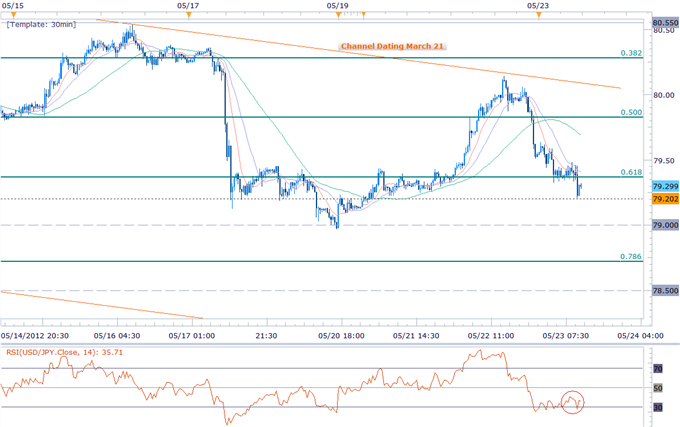 The scalp chart shows the USD/JPY continuing to trade within the confines of a descending channel formation with the pair trading just below the 61.8% Fibonacci extension taken from the March 14th and April 20th crests at 79.40. Interim support rests at 79.20 backed by the 79-figure and the 78.6% extension at 78.75. A breach above interim resistance eyes topside targets at the 50% extension at 79.85 and channel resistance. We will look to add to longs with a breach above channel resistance with such a scenario eyeing subsequent resistance targets at the 38.2% extension at 80.30 and the 80.85. 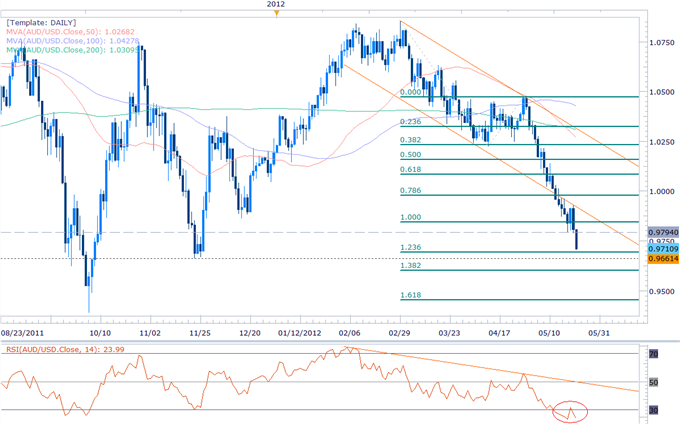 The Australian dollar is the weakest performer in US trade with a decline of more than 1.05% on the session. Risk-off flows have continued to weigh on the high yielders with the commodity bloc coming off sharply early in the session. The AUD/USD now eyes our medium-term objective at the 123.6% Fibonacci extension taken from the February 29th and April 27th crests at 9695. Once this limit has been triggered, we shift our focus to key support at the November lows at 9663. Interim daily resistance now stands at the 98-figure backed by the 100% extension at 9845. Look for the pair to remain in consolidation throughout US trade with rally’s offering favorable short positioning on the aussie. 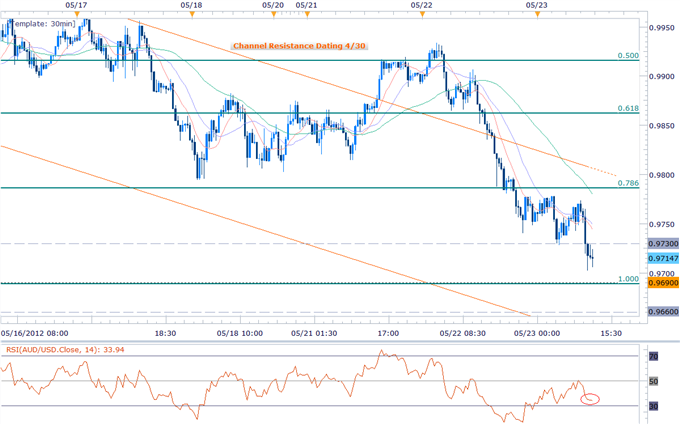 The scalp chart shows the AUDUSD breaking below soft support at 9730 with our initial scalp target eyed just below our daily objective at the 100% extension at 9690 backed by key support at 9660. Interim resistance stands at 9730 with subsequent ceilings seen at the confluence of channel resistance and the 78.6% Fibonacci extension taken from the April 27th and May 10th crests at 9785. The aussie has continued to track broader risk sentiment with precision and as such, a rebound in risk appetite puts us on the sidelines with rallies offering fresh entries on short scalps to our medium-term objective at 9660. Only a breach above 9980 would negate our directional bias on the AUD/USD.