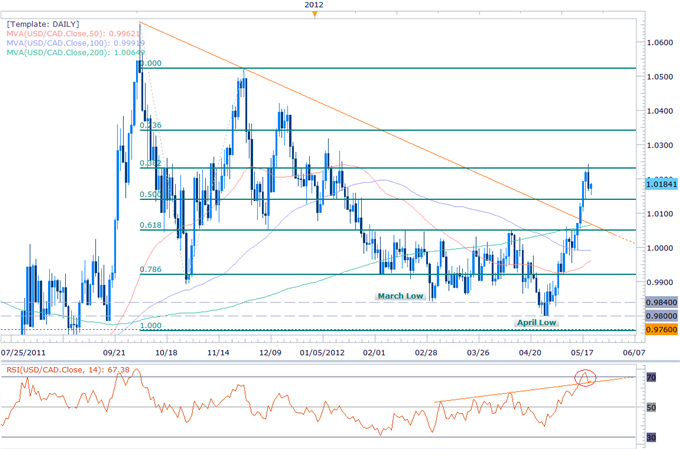 The Canadian dollar it the strongest performer against a substantially stronger greenback at the close of European trade with the USD/CAD higher by just 0.09% on the session. The dollar is firmer against all its major counterparts despite continued strength in broader risk assets with a stronger-than-expected print on April existing home sales offering further support in early US trade. Daily resistance stands with the 38.2% Fibonacci extension taken from the October and November crests at 1.0230 with a breach above this mark eyeing our next objective at the 23.6% extension at 1.0340. Interim daily support rests with the 50% extension at 1.0140 and is backed by the confluence of former trendline resistance (now support) and the 200-day moving average at 1.0065. 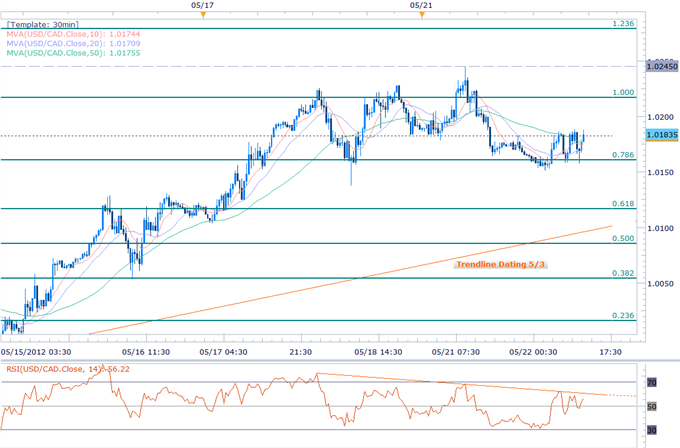 The scalp chart shows the USD/CAD continuing to hold just above the 78.6% Fibonacci extension taken form the April 27th and May 11th troughs at 1.0160 with the pair now testing interim resistance at 1.0185. Subsequent topside resistance targets are eyed at the 100% extension at 1.0220, 1.0240, and the 123.6% extension at 1.0280. A break below interim support risks a more substantial correction off the monthly high at 1.0245 with downside support levels seen at the 61.8% extension at 1.0115 and trendline support dating back to the May 3rd low. Only a move below this trendline would negate our medium-term bias with such a scenario likely to find support at the 200-day moving average previously mentioned at 1.0065. 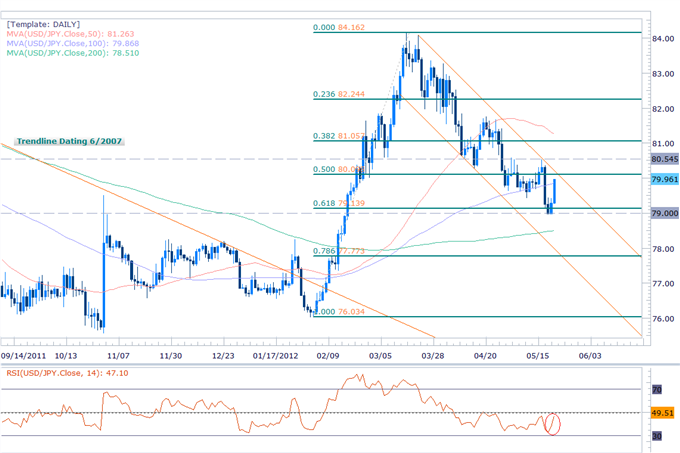 The Japanese yen is the weakest performer for a second consecutive session against the dollar with a loss of more than 0.84% in early afternoon trade. While we continue to hold our long position off the 79-figure, the pair remains at risk ahead of tonight’s Bank of Japan interest rate decision with speculation circulating that the central bank may look to further expand its asset purchase program in order to support the fragile recovery (a bearish yen event). Such a scenario puts our initial objective in view at the confluence of channel resistance and the 50% Fibonacci retracement taken form the February advance just above the 80-figure. As we often note, these convergences typically trigger strong directional movements with either a break above or a rebound off the figure likely to see an extended run, with tonight’s rate decision offering a catalyst for such an event. That said, we look to book half our position at the 80-handle with our stops now moved to break even ahead of tonight’s event risk. Note that RSI now looks for poised for a break above the 50-level for the first time since April 5th, with such a move likely to see the exchange rate clear key resistance above the 80-figure. 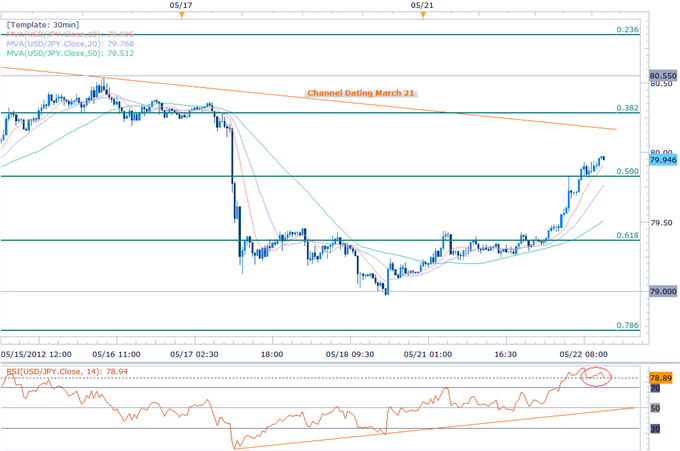 The scalp chart shows the USD/JPY holding just above the 50% Fibonacci extension taken from the March 14th and April 20th crests at 79.80. Channel resistance, currently around 80.15, offers the first support target for the yen (resistance on USDJPY) and a breach above would suggest that the correction off the March highs may be complete with such a scenario likely to see accelerated losses for the yen. A breach here exposing subsequent resistance targets at the 38.2% extension at 80.30, 80.55, and the 23.6% extension at 80.85. A break below interim support eyes floors at the 61.8% extension at 79.40 backed by the three month low at the 79-handle. As we noted in yesterday’s Winners/Losers report, the shift in broader market sentiment in favor of risk is supportive of this advance with a possible reversal into risk aversion likely to limit topside moves in the interim.