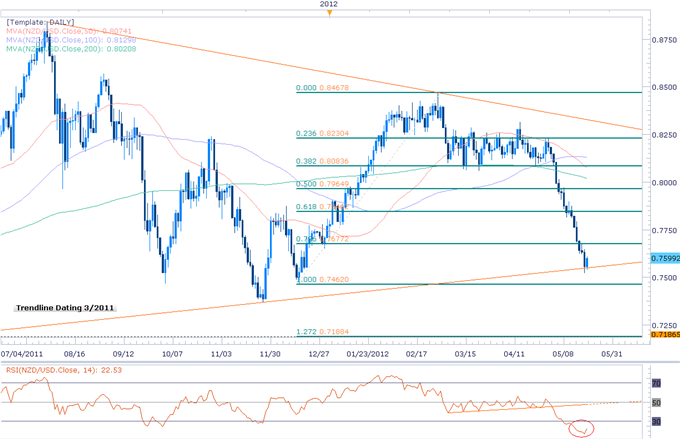 The New Zealand dollar is the top performer against the greenback with an advance of 0.52% at the close of European trade. Broader market sentiment remains well supported with risk assets taking a reprieve from the heavy selling pressure seen last week. The NZD/USD rebounded off trendline support dating back to March of 2001 at 0.7550 with daily RSI reversing sharply after reaching extreme oversold levels not seen since August of 2008. Daily topside resistance now stands with the 78.6% Fibonacci retracement taken from the mid-December advance at 0.7680 and is backed by the 61.8% retracement at 0.7850. A break below trendline support eyes the December lows at 0.7460. 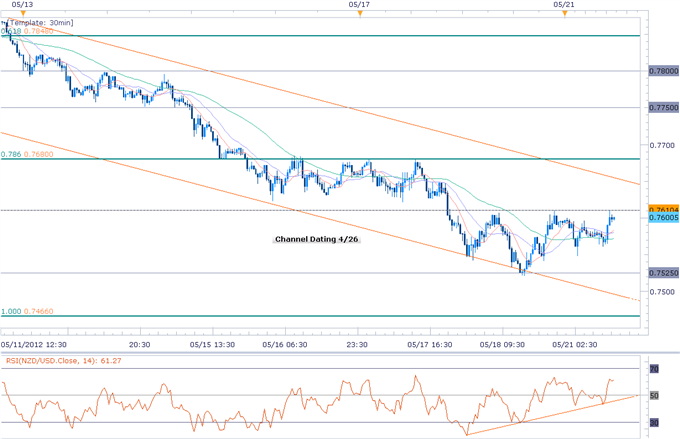 The scalp chart shows the NZD/USD continuing to trade within the confines of a descending channel formation dating back to April 26th with the pair currently holding just below interim resistance at 0.7610. Look for the pair to remain well supported at these levels amid a rebound in broader risk appetite with a likely breach above this mark eyeing topside targets at channel resistance, the 78.6% Fibonacci retracement at 0.7680 and 0.7750. Interim support rests at 0.7525 backed by the December low at 7460. 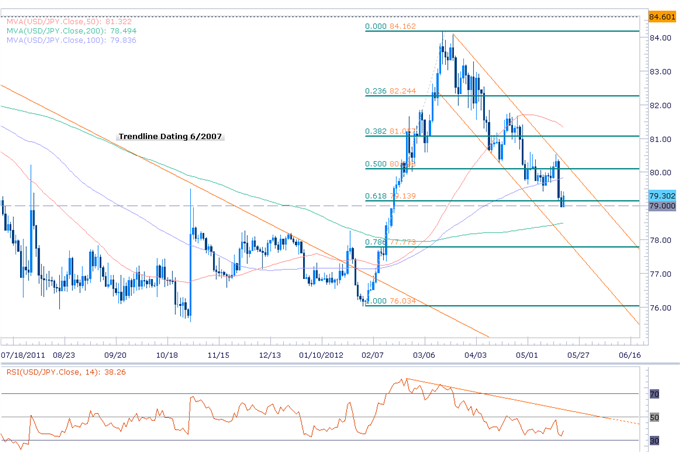 The Japanese yen is the weakest performer against the dollar with a loss of 0.38% in US trade. The USD/JPY rebounded sharply off the 79-handle with the pair continuing to trade within the confines of a flag formation off the March highs. As we noted earlier in the month, our medium-to-long term bias remains weighted to the topside with long entries favored between the 200-day moving average at 78.50 and the 61.8% Fibonacci retracement taken from the February advance at 79.15. Initial daily resistance stands at the confluence of the 50% retracement and channel resistance just above the 80-handle with only a break below the 200-day moving average negating our directional bias.

The scalp chart shows the USD/JPY holding just below the 61.8% Fibonacci extension taken from the March 14th and April 20th crests at 79.35. Initial topside targets are eyed at the 50% extension at 79.80 and channel resistance. A break above this level offers further conviction with subsequent resistance targets seen at the 38.2% extension at 80.30, 80.55 and the 23.6% extension at 80.85. Interim support rests with the 79-figure backed by the 78.6% extension at 78.75 and 78.50. Note that while trading conditions in the yen are not conducive to scalping, we are long a fourth of our typical trade size at the figure with our initial objective eyed above the 80-handle. A breach above channel resistance would suggest that the correction off the March highs may be complete with such a scenario likely to see accelerated losses for the yen. A shift in broader market sentiment in the favor of risk appetite would likely be the catalyst needed for the topside break.