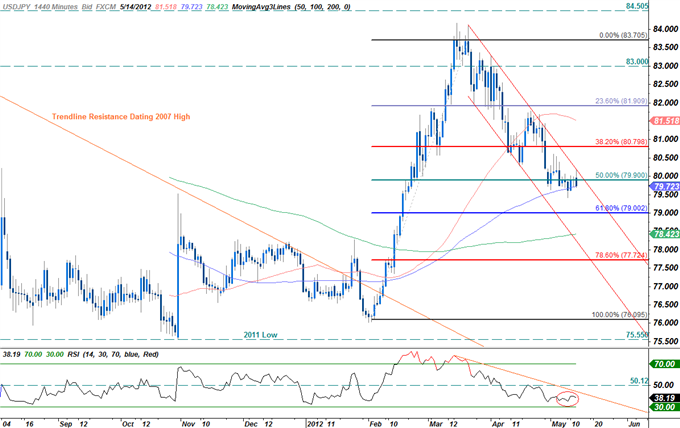 The Japanese yen is the top performer against a stronger greenback ahead of the European close with the USDJPY off by more than 0.26% on the session. Risk aversion flows are in full effect early this week with equity markets off sharply amid ongoing concerns regarding Eurozone stability and headlines regarding JP Morgan’s $2 billion write down late last week. Look for the high yielders to remain under pressure as traders jettison risk assets in favor of the perceived safety of the yen and the reserve currency.

The daily chart shows the USDJPY holding within the confines of a flag formation off the March highs with the exchange rate holding just above the 100-day moving average at 79.70. While our long-term bias on the pair remains weighted to the topside, we continue to eye favorable entries between the 61.8% Fibonacci retracement taken form the February advance at the 79-figure and the 79.70. A break below the 61.8% extension risks further losses with such a scenario eyeing daily support at the 200-day moving average at 78.40. A break above channel resistance offers further conviction on our directional bias with medium-term topside targets eyed at the 38.2% extension at 80.80 and the 83-figure. 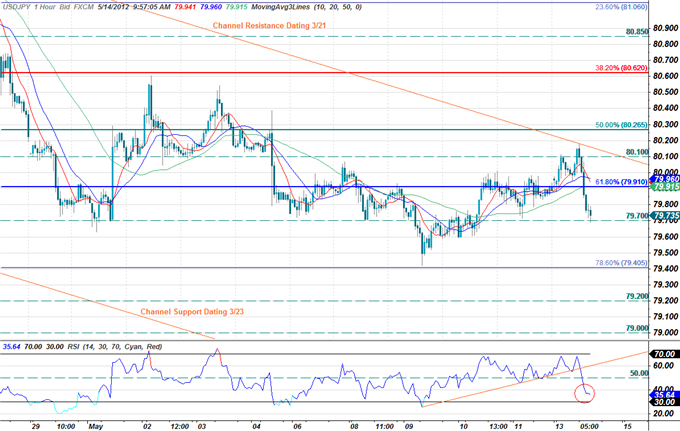 The scalp chart shows the USDJPY breaking back below the 61.8% Fibonacci extension taken from the April 1st and 20th crests at 79.90 before testing soft support at 79.70. Subsequent downside support targets are eyed at the 78.6% extension at 79.40, 79.20 and the 79-handle. Interim resistance now stands with the 61.8% extension at 79.70 backed by channel resistance at 81.10. A close above this mark alleviates some of the downside pressure with topside resistance targets seen at the 38.2% extension at 80.60 and 80.85. Look for the pair to remain under pressure throughout the session as risk-off flows continue to support the yen with a move towards the 79-handle offering favorable long entries. 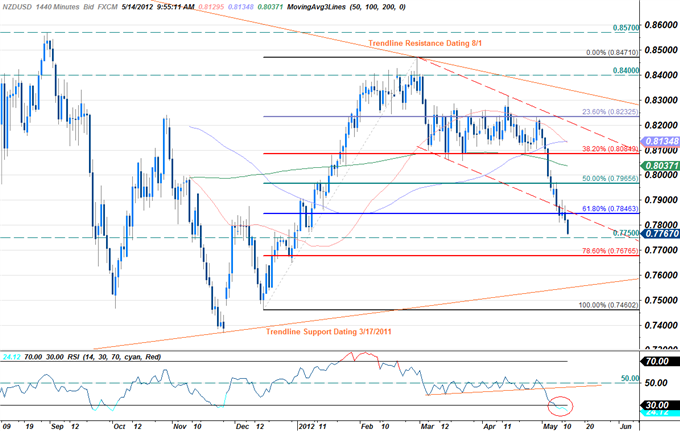 The New Zealand dollar is the weakest performer in early US trade with a loss of more than 0.78% on the session. The high yielder remains at risk as broader sentiment remains under pressure with the daily chart showing the kiwi breaking below the 61.8% Fibonacci retracement taken for the December advance at 7845. Daily objectives are eyed at 7750 and the 78.6% retracement at 7675 with only a move back above the confluence of former channel support and the 61.8 retracement at 7845 likely to alleviate further downside pressure. Should a move would need to be supported by a rebound in broader risk sentiment. 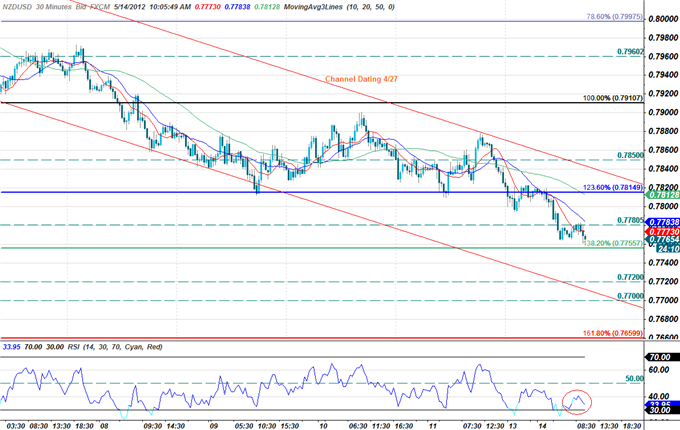 The scalp chart shows the NZDUSD continuing to trade within the confines of a descending channel formation dating back to the April 27th high with the pair currently testing interim support at the 138.2% Fibonacci extension taken from the February 29th and April 12th crests at 7755. Subsequent downside targets are seen at 7720, the 77-figure, and the 161.8% extension at 7660. Interim resistance stands at 7780 and is backed by the 123.6% extension at 78.15 and channel resistance. We remain bearish on the kiwi with intra-day rallies offering fresh short-scalp opportunities. Note that only a breach above channel resistance would negate our short-term directional bias.