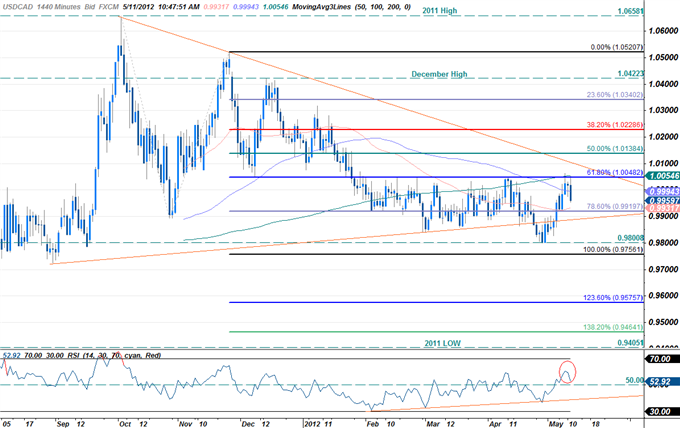 The Canadian dollar is the top performer against the greenback ahead of the European close with an advance of 0.62% on the session. A blow-out employment print out of Canada prompted the loonie rally after the report showed the creation of 58.2K jobs in the month of April, topping estimates that called for a gain of just 10.0K. Although the unemployment rate rose to 7.3% from 7.2% as expected, the jump can be attributed to more workers re-joining the labor force with the participation rate rising to 66.8 from 66.6. The rally was further supported by a stronger than expected print on the University of Michigan confidence survey’s which topped consensus estimates with a print of 77.8. The data fueled a rebound in risk-appetite after news of a $2 billion loss by JP Morgan bank weighed heavily on broader market sentiment in overnight trade.

The daily chart shows the USDCAD rebounding sharply off critical daily resistance at the confluence of the 200-day moving average and the 61.8% Fibonacci extension taken from the October and November highs at 1.0050. This level remains paramount for the loonie with daily support seen at the 78.6% extension at 9920. 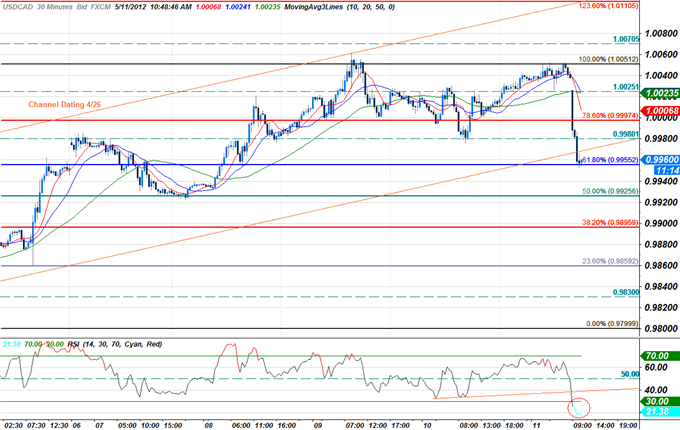 The scalp chart shows the USDCAD breaking below the 78.6% Fibonacci retracement taken from the April 11th decline at parity before encountering support at the 61.8% retracement at 9955. A break below this level eyes subsequent floors at 9925, the 38.2% retracement at 9895 and the 23.6% retracement at 9860. Topside resistance now stands at 9980 backed by parity and 1.0025. Key resistance still stands with the 100% extension at 1.0050 and if compromised shifts our focus aggressively higher on the pair. In the interim we remain neutral on the USDCAD between 9920 and 1.0050. 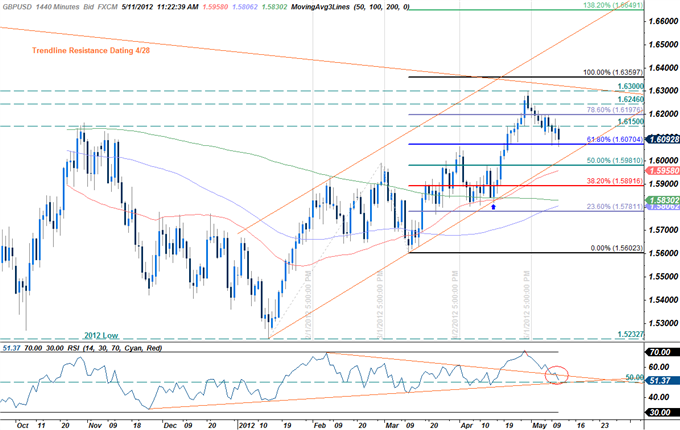 The British pound is the weakest performer on the session with a decline of 0.29% against the dollar. The sterling correction has continued to play out with the pair re-testing key daily support at the 61.8% Fibonacci extension taken from the January 13th and March 12th troughs at 1.6070. We have continued to eye this level for the past two weeks with a break exposing favorable long entries just ahead of channel support which currently rests at the 1.60-figure. Daily resistance stands at 1.6150 and the 78.6% extension at the 1.62-handle. 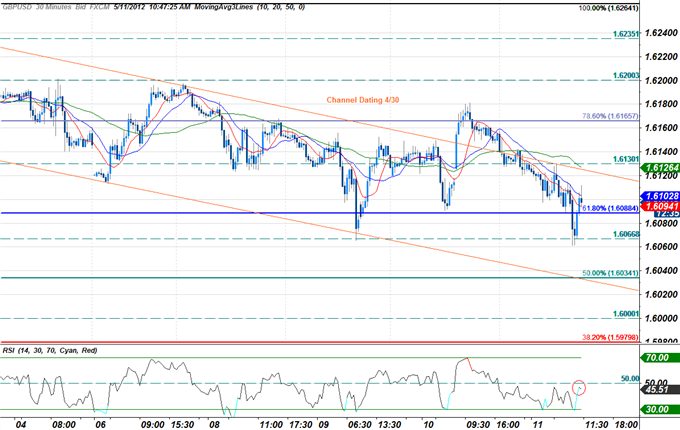 The scalp chart shows the GBPUSD continuing to trade within the confines of a descending channel formation after a false break yesterday briefly saw the pair breach channel resistance. Interim support rests at the 61.8% Fibonacci extension taken from the March 12th and April 5th troughs at 1.6088 backed by soft support at 1.6065 and the 50% extension at 1.6035. Topside advances for now are likely to be capped by channel resistance with subsequent ceilings seen at the 78.6% extension at 1.6165 and the 1.62-figure. While our medium-term bias on the pound remains weighted to the topside, we continue to wait for confirmation that the correction off the 2012 highs at the 1.63-handle is complete with a breach above the 1.62-figure offering further conviction on our directional bias.