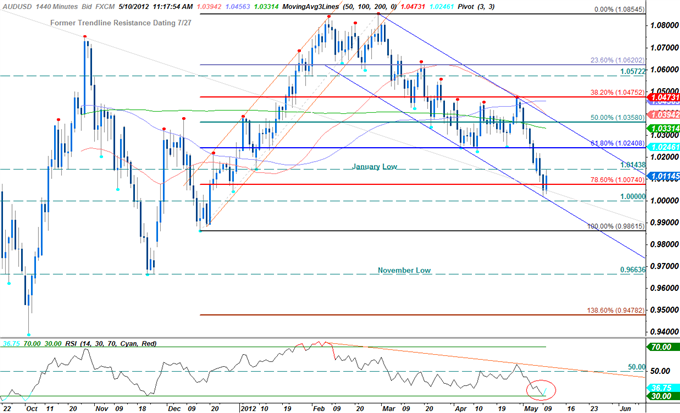 The Australian dollar is the top performer against a weaker greenback at the close of European trade with an advance of 0.57% on the session. The gains come after the aussie made fresh 2012 lows yesterday at 1.0020 with employment data out of $1 trillion economy offering some support for the battered currency. Although the headline unemployment rate unexpectedly fell from 5.2% to 4.9%, a closer look at the data sees the majority of the jobs created last month were part-time with the participation rate falling from a downwardly revised 65.3% to 65.2%, missing calls for a print of 65.4%. Trade balance figures out China also offered a mixed outlook with the headline print toping expectations at $18.43B, up from a previous print of just $5.35B. However, exports and imports were much weaker than expected with softness in imports specifically having largely implications for the aussie. Nonetheless, broader market sentiment remains well supported in early US trade with the aussie holding above the 1.01-figure.

The daily chart shows the AUDUSD rebounding off channel support before encountering resistance at the January low at 1.0143. This level is now key with a breach above risking a run-up to the 61.8% Fibonacci retracement taken form the December advance at 1.0240. Our objective has been and continues to be parity with a break below eyeing daily targets at the 100% retracement at 9860. Note that daily RSI tagged the 30 oversold level for the first time since November 23rd and suggests we may see further aussie losses in the days ahead. 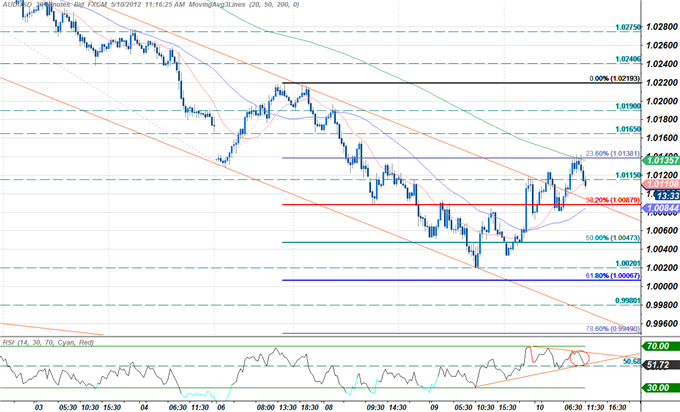 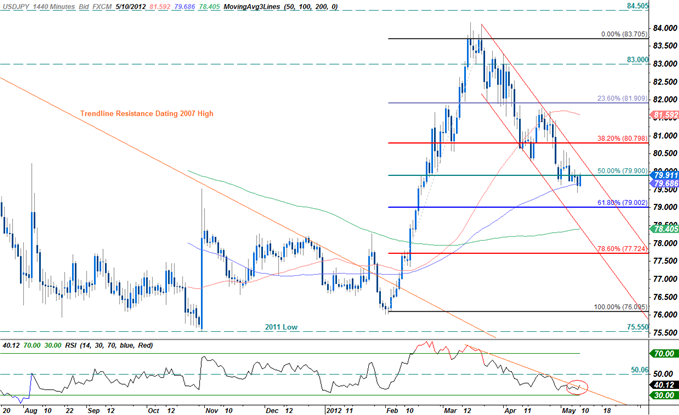 The Japanese yen is the weakest performer at noon in New York with a decline of 0.37% on the session. The yen’s recent advance has taken a reprieve amid a rebound in risk appetite with the USDJPY holding just below daily resistance at the 50% Fibonacci retracement taken from the February advance at 79.90. While our medium-term bias on the pair remains weighted to the topside, it’s important to note that with headline risks our of Europe continuing to dominate headlines, a continued move back into risk aversion is likely to keep the low yielder well supported with long entries favored between the 61.8% retracement at the 79-figure and the 100-day moving average at 79.68. A break below the 79-handle negates our bias with such a scenario eyeing daily support at the 200-day moving average at 78.40. Look for a breach above channel resistance to confirm the completion of the correction with a move above the 38.2% retracement at 80.80 offering further conviction on our directional bias. Note that while RSI is now testing a breach above trendline resistance dating back to late March, price action has yet to offer such a trigger and as such we continue to eye a breach above channel resistance. 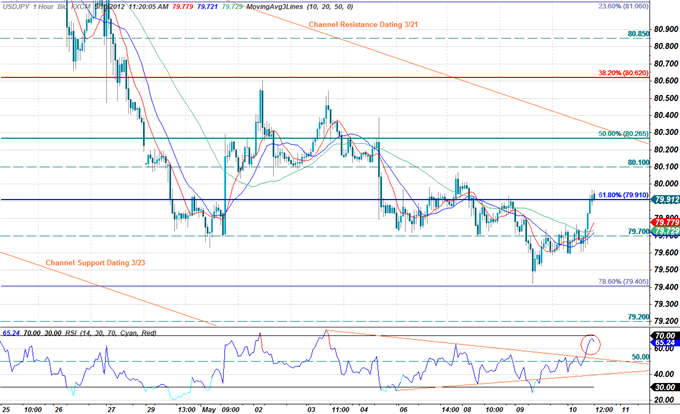 The scalp chart shows the USDJPY resting just above the 61.8% Fibonacci extension taken from the April 1st and 20th crests at 79.90 (coincides with the 50% retracement seen on the daily chart above). Interim resistance now stands at 80.10 and at the confluence of the 50% extension and channel resistance at 80.25. Subsequent topside targets are eyed at the 38.2% extension at 80.60 and 80.85. Interim support rests at 79.70 backed by the 78.6% extension at 79.40 and 79.20. Again, we continue to favor buying into USDJPY weakness with only a break below the 79-figure invalidating our broader outlook.