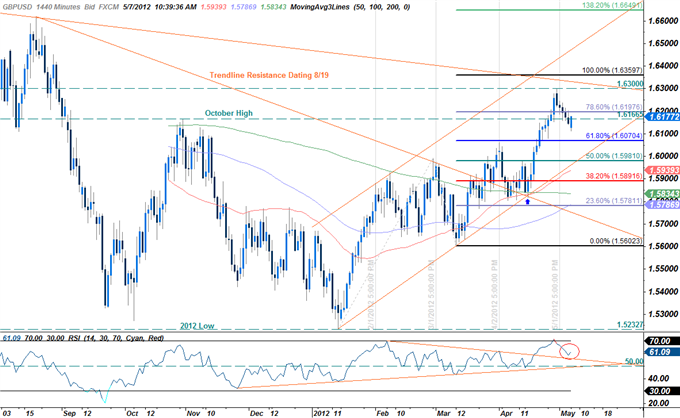 The British pound is the top performer ahead of the European close with an advance of 0.12% against the greenback. The gains come on the back of a sell-off in broader risk assets after results from this weekend’s elections in France and Greece stoked concerns about the ongoing European debt crisis. France incumbent Nicolas Sarkozy was defeated by Socialist Francois Hollande in the second round of the presidential elections with the president elect pledging to “bring back Europe on a track for jobs, growth and the future.” Hollande has long been an opponent of deep austerity cuts amid concerns over economic growth with the former Mayor calling for changes to the EU fiscal compact, which could have significant implications for the region. In Greece, voters rejected both of the incumbent parities and with no victor, investors will have to wait for further clarity on who exactly will lead the debt laden country amid the ongoing recession facing the region. European headlines have continued to weigh risk appetite with US equity markets trading in the red early in the session.

The sterling has remained well supported despite the draw-down in risk as the pound continues to gain haven status with the GBPUSD now eyeing the 78.6% Fibonacci extension taken from the January 13th and March 12th troughs at the 1.62-figure. The pair remains within the confines of a broad ascending channel formation dating back to the January lows with the sterling snapping a 5-day losing streak after posting 10-days of consecutive advances in late April. The correction may have run its course with a daily close above the 1.62-figure likely to alleviate further downside pressure. While our medium-term bias on the pound remains to the topside we await further confirmation that the downside correction is in fact complete with favorable entries eyed at the 61.8% extension at 1.6070 and channel support. 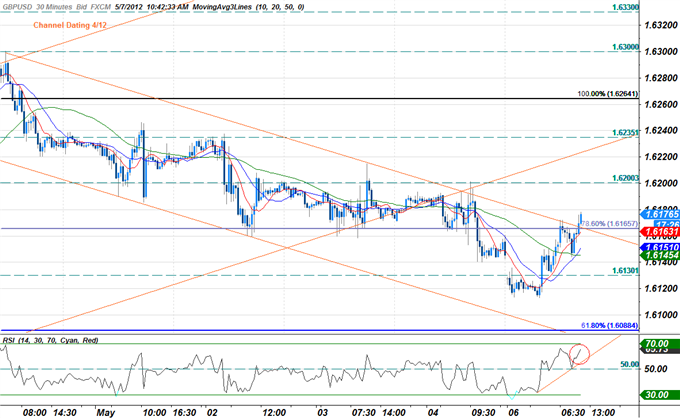 The scalp chart shows the GBPUSD holding within the confines of a descending channel formation dating back to the 2012 high at the 1.63-handle with the pair testing the confluence of the 78.6% Fibonacci extension taken from the March 12th and April 5th troughs at 1.6165 and channel resistance. A breach above this mark eyes topside targets at the 1.62-figure backed by 1.6235, the 100% extension at 1.6265 and the 1.63-handle. Interim support rests at 1.6130 backed by the 61.8% extension at 1.6090. Look for the pair to remain well supported in North American trade with a close above the 1.62-handle offering further conviction on our directional bias. 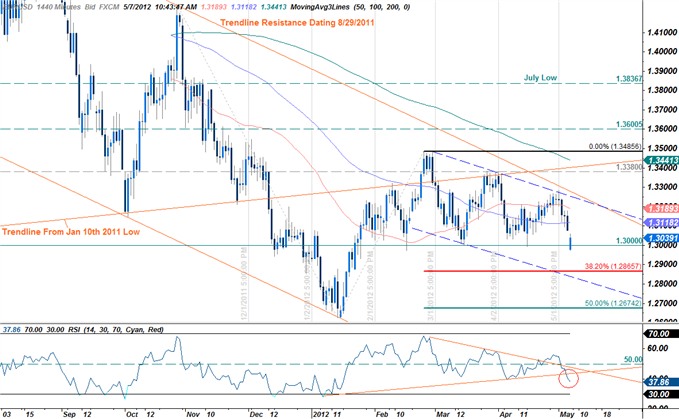 The euro is the weakest performer against the greenback with a loss of 0.34% on the session after moving a nearly 110% of its daily average true range. The pair remains at risk on the back of the elections with the single currency struggling to pare losses after gaping lower by nearly 100pips at the Sunday open. Our primary medium-term objective is eyed at the 38.2% Fibonacci extension taken from the October 27th and February 29th crests at 1.2865. The single currency may look to fill the gap and as such we remain on the sidelines here with rally’s offering favorable entries above the 1.30-figure. Note that daily RSI has broken below trendline support dating back to January with the oscillator at its lowest levels since January 17th. Only a break above channel resistance, currently at 1.3280, invalidates our bias on the euro. 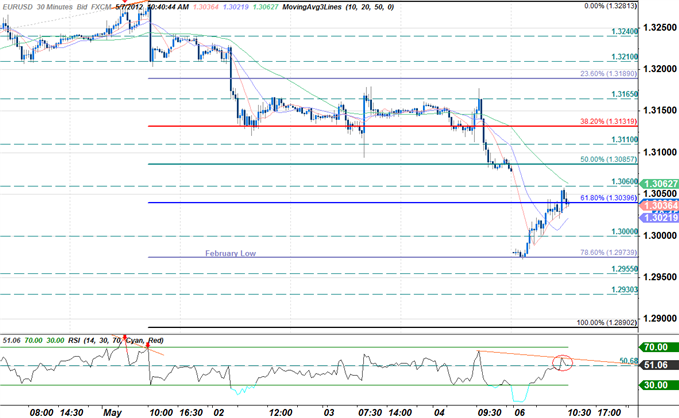