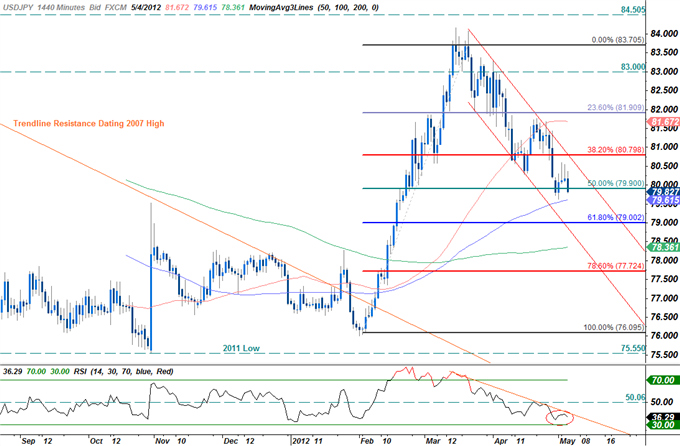 The Japanese yen is the top performer in early US trade with an advance of 0.43% against the dollar. A weaker-than-expected print on April non-farm payrolls weighed heavily on broader risk sentiment after the report showed the addition of just 115K jobs last month, missing consensus estimates calling for a print of 160K. While the unemployment rate surprisingly declined to 8.1% from 8.2%, it’s important to note that the decline can largely be attributed to discouraged workers leaving the labor force with participation rate falling from 63.8% to 63.6%. The data prompted risk aversion flows that have continued to support the yen with the dollar seeing a mixed performance as the weak data fuels speculation of further quantitative easing from the Fed.

The daily chart shows the USDJPY continuing to trade within the confines of a flag formation off the March highs with the pair breaking back below the 80-figure on the back of today’s NFP print. Initial daily support now rests with the 100-day moving average at 79.60 backed by the key 61.8% Fibonacci retracement taken from the February advance at 79-figure. Daily resistance stands with channel resistance and the 38.2% retracement at 80.80. 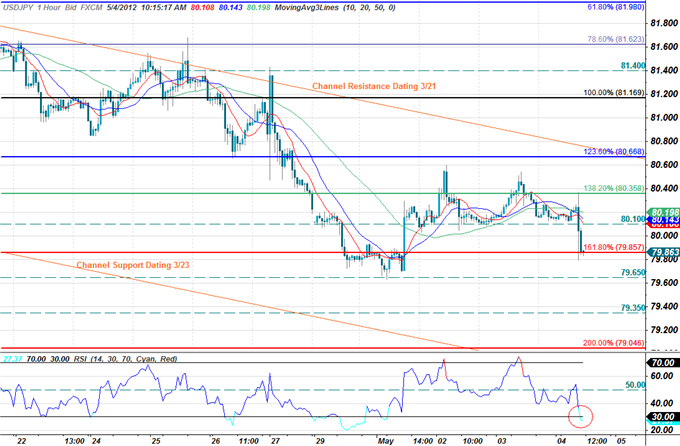 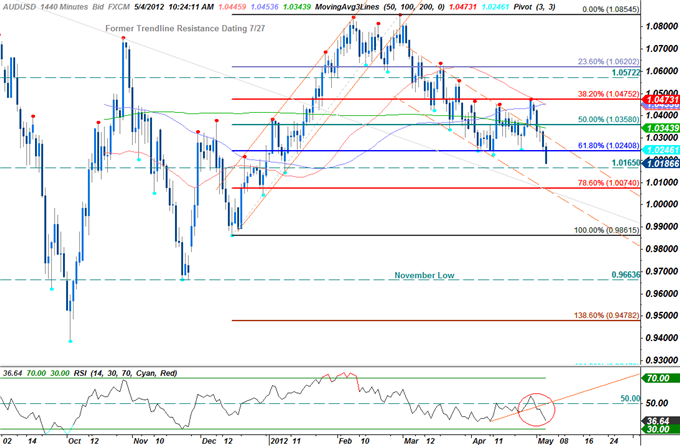 The Australian dollar is the weakest performer among the majors with a decline of 0.78% on the session. The high yielder has continued to track market sentiment with the AUDUSD breaking below key daily support at the 61.8% Fibonacci retracement taken from the December advance at 1.0240. As noted in Tuesday’s report, this level was our weekly target with today’s decline risking further losses for the aussie moving forward. The RBA’s monetary policy report released overnight has also added to the bearish tone with the central bank lowering growth and inflation forecasts citing risks to global growth ‘remain on the downside.’ Daily support is now seen at 1.0165 backed by the 78.6% retracement at 1.0075. 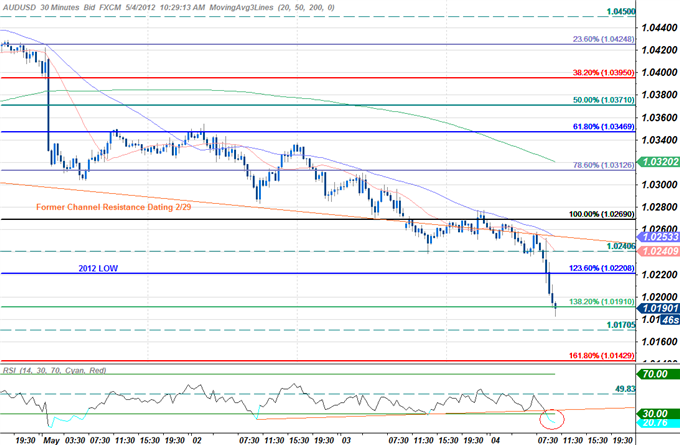 The scalp chart shows the AUDUSD moving back below former channel resistance dating back to 2/29 before finding solace around the 138.2% Fibonacci extension taken from the April 12th and 27th crests at 1.0190. Subsequent support targets are seen lower at 1.0170, the 161.8% extension at 1.0140 and the 1.01-figure. Interim resistance now stands with the 123.6% extension at 1.0220 backed by 1.0240 and the 100% extension at 1.0270. We continue to favor the downside on the aussie moving forward with rallies offering fresh short entries.