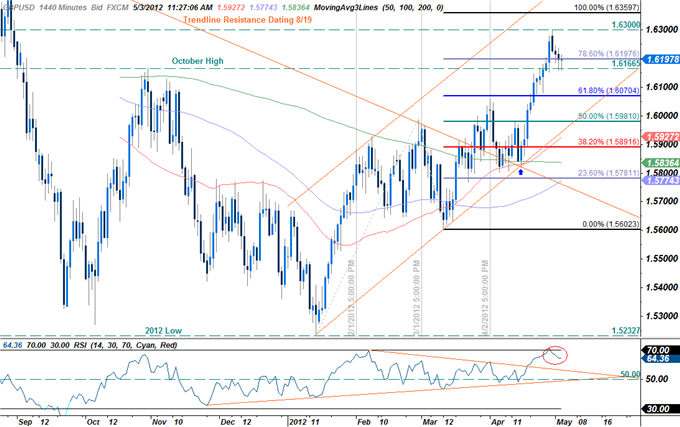 The British pound is the top performing currency at the close of European trade with the sterling remaining unchanged on the session despite broad dollar advances. As expected the ECB held the benchmark interest rate at 1.0% with President Mario Draghi citing that board “didn’t discuss” the possibility for a rate cut this month. Broader market sentiment was well supported heading into the US trade with weaker than expected ISM data weighing on risk appetite early in the session. The April ISM non-manufacturing composite disappointed with a print of 53.5, missing calls for a read of 53.5 and coming off of a previous print of 56.0. Equity markets remain on the defensive at noon in New York with the dollar limiting further sterling advances in the interim.

The daily chart shows the GBPUSD holding within the confines of a broad ascending channel formation dating back to the January lows with the pair holding a tight range between the 78.6% Fibonacci extension taken from the January and March troughs at the 1.62-figure and the October high at 1.6165. While our medium-term bias remains weighted to the topside, it seems that the sterling correction may have yet to be completed with the downside risk rising with a break below 1.6165. 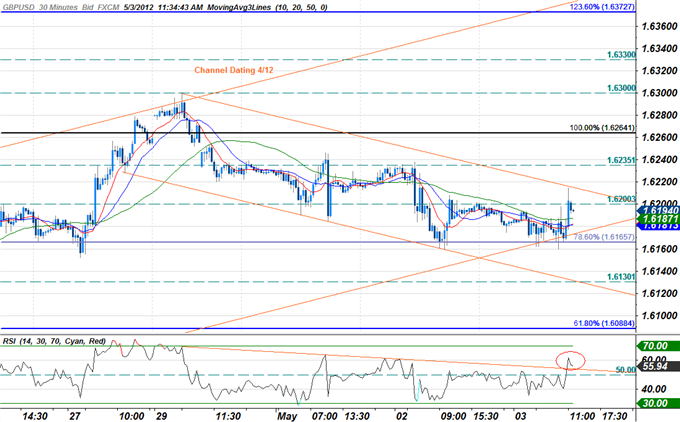 The scalp chart shows the pair trading within the confines of an ascending channel formation dating back to April 12th with the pound testing the confluence of channel support and 78.6% Fibonacci extension taken from the March 12th and April 5th lows at 1.6165. Note that this level represents the October highs and if compromised would suggest that the sterling correction is still under way as it continues to trade within a short-term embedded descending channel off the 1.63-firgure. Subsequent downside targets are eyed at 1.6130, the 61.8% extension at 1.6090 and 1.6060. Interim resistance stands at with channel resistance backed by 1.6235, the 100% extension at 1.6265 and the 2012 high at the 1.63-handle. 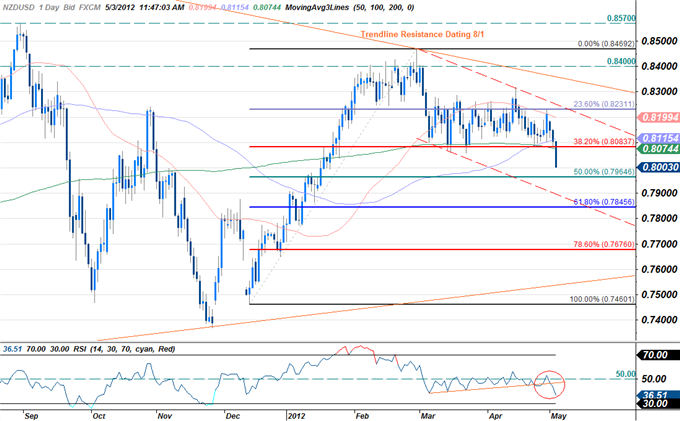 The New Zealand dollar is the weakest performer for a second consecutive day after weaker than expected employment data last night supporting a break of key support at the confluence of the 38.2% Fibonacci retracement taken from the December advance and the 200-dya moving average at 8080. We cited this key level in yesterday’s Trade the News Report ahead of the employment print with the break now shifting our focus lower on the pair. The kiwi continues to trade within the confines of a descending channel formation with daily support now resting with the 50% retracement at 7965 and channel support. Topside daily resistance now stands with former support at 8080. Note that a break below RSI support dating back to March confirmed the decline with further losses for the kiwi expected. 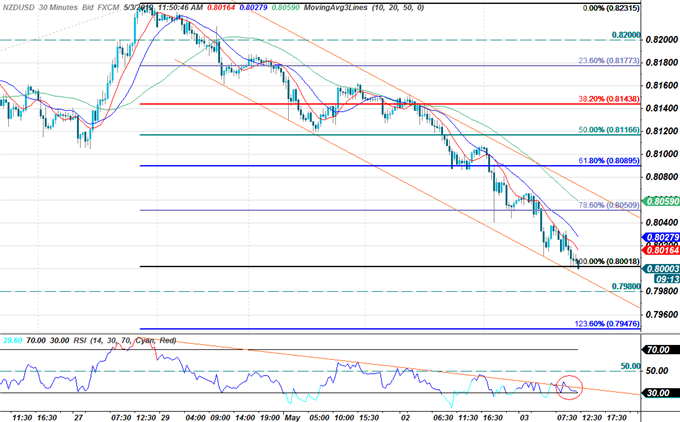 The scalp chart shows the pair holding within the confines of a tight descending channel formation dating back to April 30th with the kiwi finding support at the 100% Fibonacci extension taken from the April 12th and 27th crests at the 80-handle. A likely hold here in US trade eyes intraday resistance targets at the 78.6% extension at 8050 and channel resistance, with a breach eyeing subsequent ceilings at the 61.8% extension at 8090. Should the interim support be compromised, look to support targets lower at 7980 and the 123.6% extension at 7950.