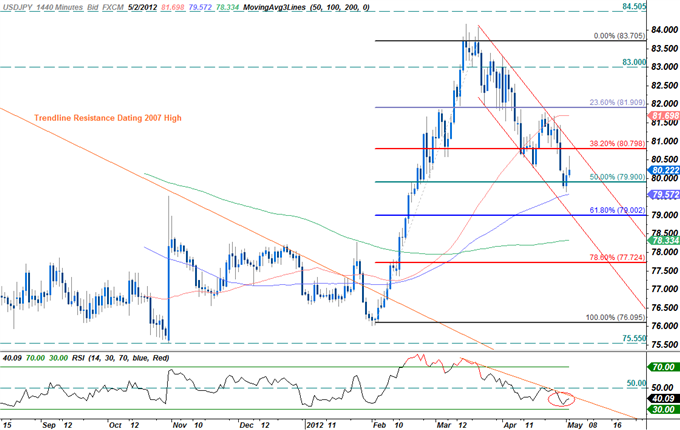 The Japanese yen is the top performer against a stronger dollar at the close of European trade with loss of just 0.11% on the session. The greenback has continued to outperform all its major counterparts as markets remain on the defensive after a weaker than expected ADP employment report showed the addition of just 119K private sector jobs in April, missing consensus estimates for a print of 170K. Risk-off flows have supported both the greenback and the yen with equity markets and Treasury yields trading markedly lower in early US trade.

The USDJPY continues to trade within the confines of a flag formation off the March highs with the exchange rate holding above the 50% Fibonacci retracement taken off the February advance at 79.90. We continue to favor long entries between the 61.8% retracement at the 79-figure and the 100-day moving average at 79.57 with a break above daily RSI trendline resistance likely to mark the end of the yen correction. 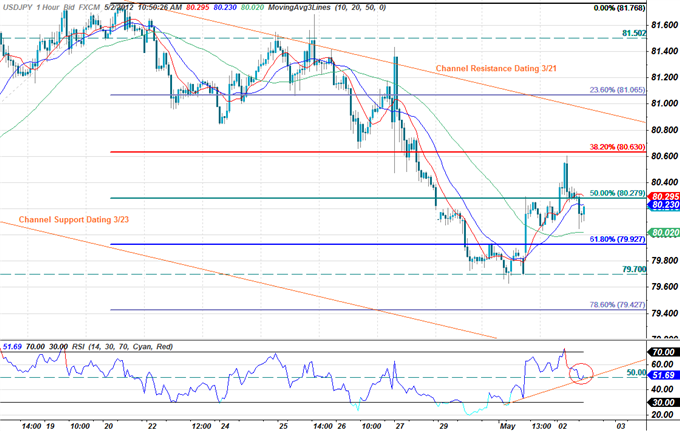 The scalp chart shows the pair rebounding off of soft support at 79.70 yesterday before reversing course just ahead of the 38.2% Fibonacci extension taken form the April 1st and 20th crests at 80.60. Interim support rests with the 61.8% extension just shy of the 80-handle with subsequent floors seen at 79.70 and the 78.6% extension at 79.40. A breach above interim resistance at the 50% extension at 80.30 eyes topside targets at 80.60 and channel resistance. Again we note that a breach above this channel would likely mark the completion of said yen correction with longer-term objectives held at the 83-figure and 83.70. 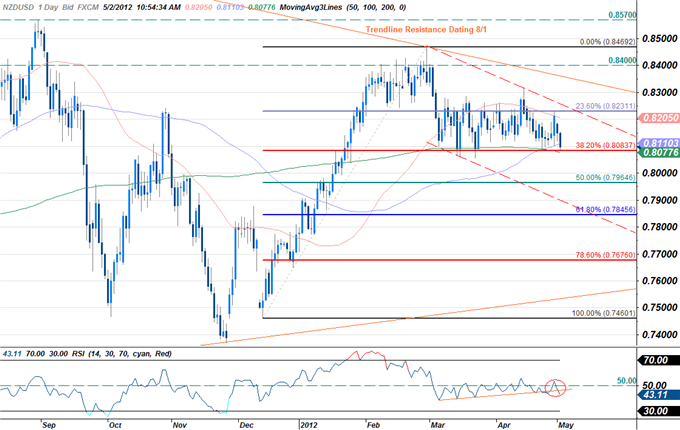 The New Zealand dollar is the weakest performer with a loss of 0.67% on the session. The kiwi now eyes critical support at the confluence of the 38.2% Fibonacci retracement taken from the December advance and the 200-day moving average at 8080. This level remains paramount for the kiwi with a break eyeing subsequent daily targets lower at 50% retracement at 79.65. Key daily resistance stands with the 23.6% retracement at 8230 and channel resistance. Note that while RSI seems to have broken below trendline support dating back to March 6th, price action has not confirmed this break with only a close below 8080 opening the door for subsequent kiwi shorts. 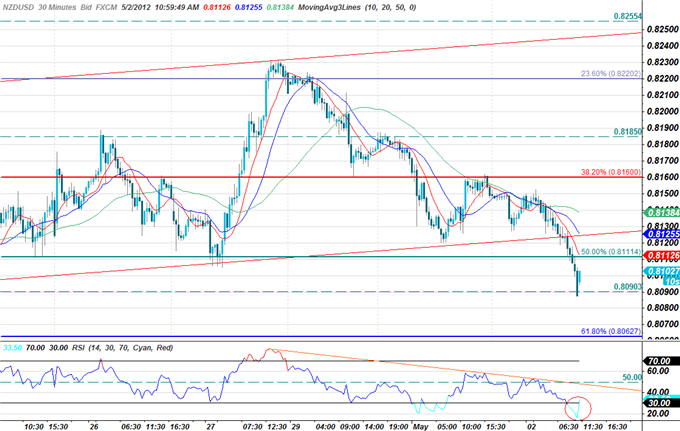 The scalp chart shows the pair breaking below short-term channel support before finding solace at the 8090 soft support level. A break here eyes subsequent intra-day support targets at the 61.8% Fibonacci extension taken from the February 29th and April 12th crests at 8060, 8040, and the 78.6% extension just below the 80-figure. Interim topside resistance stands with the 50% extension at 8110 backed by the 38.2% extension at 8160 and 8185. While we remain bearish on the NZDUSD, we will wait on entry pending a break below key support at 8080 noted on the daily chart above. Key employment data out of New Zealand later tonight may be the catalyst with consensus estimates calling for a print of 0.3% q/q, up from a previous read of 0.1% q/q with the unemployment rate expected to hold at 6.3%.