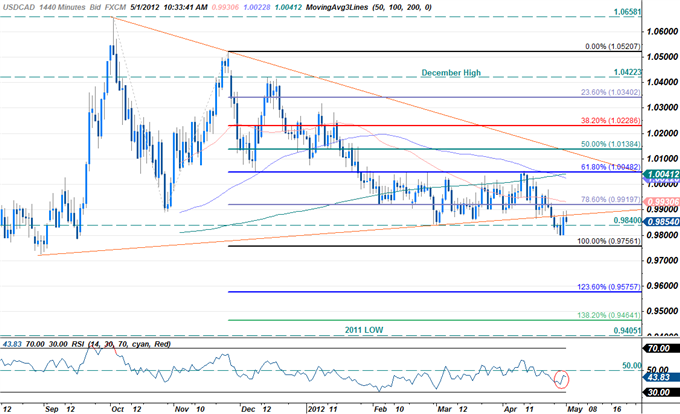 The Canadian dollar is the strongest performer against a stronger greenback in early US trade with an advance of 0.26% on the session. The dollar is stronger against all its major counterparts save the loonie which has remained well supported despite yesterday’s weaker than expected GDP print. The pair continues to trade below former trendline support dating back to August 31st with daily interim support seen at 9840 and the 100% Fibonacci extension taken from the October 4th and November 25th crests at 9756. Only a break above the 78.6% extension at 9920 would negate our bias. 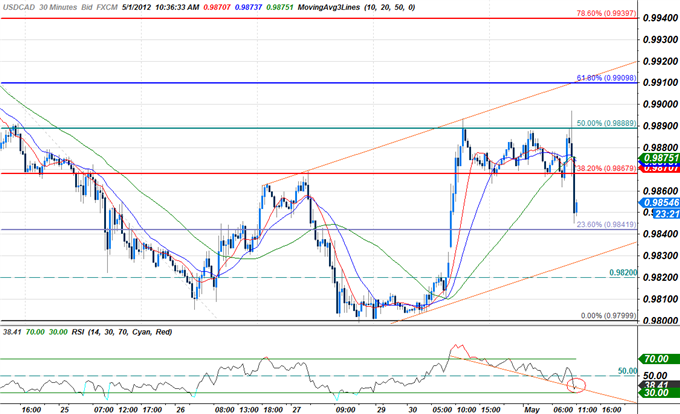 The scalp chart shows the pair breaking below interim support at the 38.2% Fibonacci retracement taken from the April 23rd decline, at 9865 before losing steam just ahead of the 23.6% extension at 9840. This level now acts as interim support with subsequent floors seen lower at 9820 and the 2012 lows at the 98-figure. Topside interim resistance stands at 9865 backed by the 50% extension at 9890 and the 61.8% extension at 9910. We remain bearish on the USDCAD targeting downside levels with a break below the yearly low at 9800 offering further conviction on our directional bias. 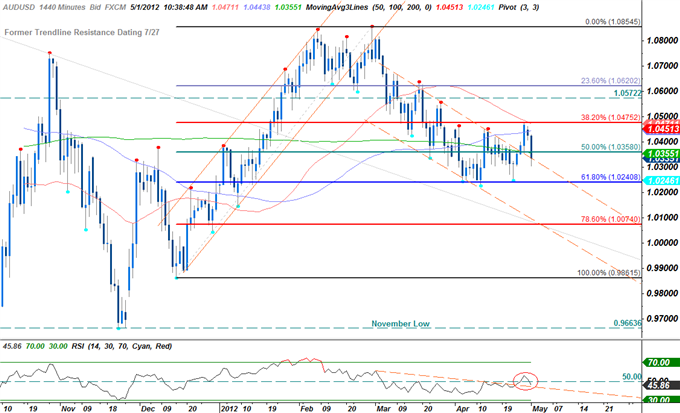 The Australian dollar is the weakest performer against the greenback with a decline of more than 0.80% on the session. The RBA surprised markets with a 50 basis point cut last night citing the move was necessary “to deliver appropriate borrowing rates” while noting that recent info suggests economic conditions remain “weaker than expected.” The move weighed heavily on the aussie with the pair moving breaking back below the confluence of the 200-day moving average and the 50% Fibonacci retracement taken form the December advance at 1.0360. A close below this level is required to sustain the dollar’s rally with our key medium-term objective eyed at the 61.8% retracement at 1.0240. 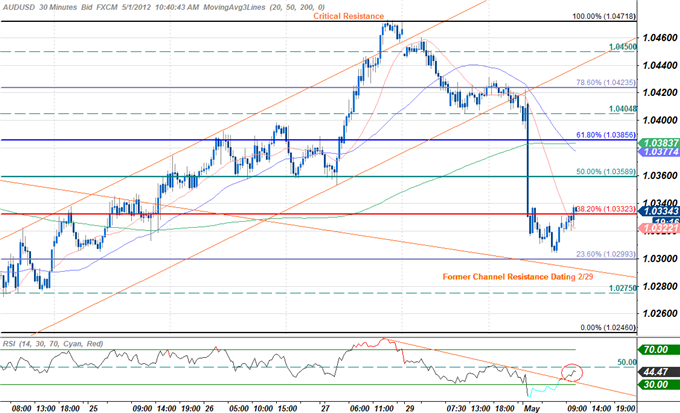 The scalp chart shows the pair falling sharply on the print with the aussie reversing just ahead of the 23.6% Fibonacci extension taken form the April 10th and 23rd troughs at the 1.03-figure. Look for the aussie to consolidate in US trade with the absence of European trade likely to see the aussie come under pressure later in the week. Topside resistance now stands at the 50% extension at 1.0360 backed by the 61.8% extension at 1.0385. Interim support targets are held at the figure backed by 1.0275, 1.0245 and the 2012 low at 1.0225.