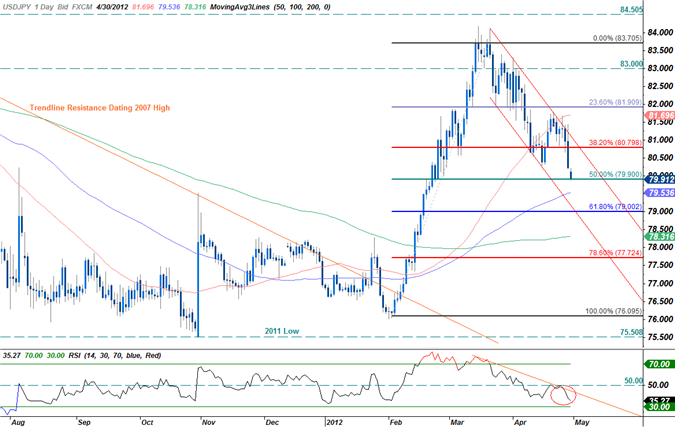 The Japanese yen is the strongest performer against a stronger dollar with an advance of 0.54% on the session. The greenback is stronger against all its major counterparts save the yen as risk assets went on the defensive on the heels of a Spanish GDP print which showed the economy had contracted by 0.3% q/q in the first quarter. While the print was slightly stronger than the -0.4% q/q estimate, investors scaled back exposure with risk-off flows supporting both the yen and the dollar. The advance in the yen has been well pronounced since the BoJ announced it was expanding its asset purchase program by ¥5 Trillion, far below consensus estimates. As Japanese officials look to curb deflationary pressures, look for further easing measures in the months ahead with the USDJPY correction likely to steepen before resuming higher.

The daily chart shows the pair continuing to trade within the confines of a flag formation off the March highs with daily support seen now seen at the 50% retracement taken from the February advance at 79.90 and the 100-day moving average at 79.54. Daily topside resistance now stands at the 38.2% retracement at 80.80, backed closely buy channel resistance. 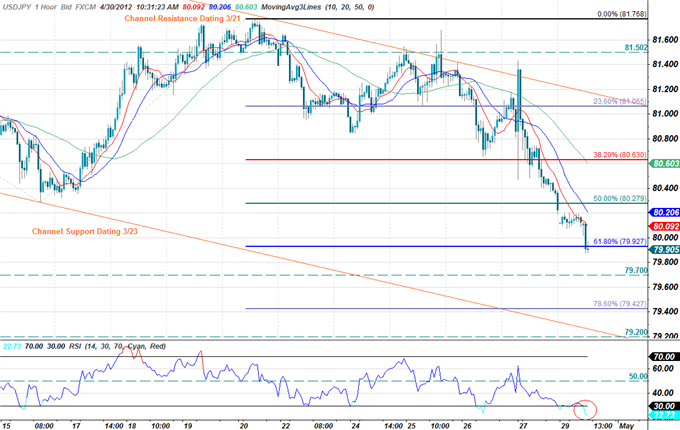 The scalp chart shows the pair holding within the confines of a descending channel formation dating back to March 21st with the pair currently trading just below the 61.8% Fibonacci extension taken form the April 1st and 20th crests at 79.90 (Note that this level coincides with the 50% retracement seen on the daily chart above). Soft support is seen lower at 79.70 backed by the 78.6% extension at 79.43 and channel support. Topside resistance stands at the 50% extension at 80.30 backed by the 38.2% extension at 80.63 and the 81-figure. We remain neutral on the USDJPY at these levels while noting that our long-term outlook remains weighted to the topside with long entries sub the 80-handle favored on a medium-to-long to term horizon. 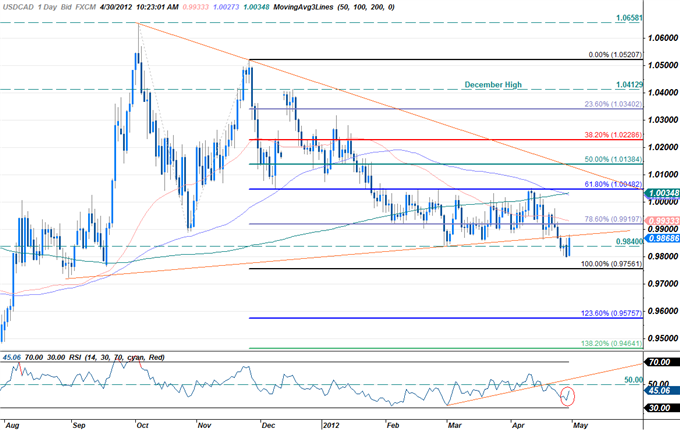 The Canadian dollar is the weakest performer against the greenback ahead of the European close with a loss of more than 0.75% on the session. Weaker-than-expected 1Q GDP data out of Canada surprised investors this morning with the print coming in at -0.2% m/m, missing consensus estimates that called for a positive print of 0.2% m/m. The loonie came under substantial pressure with the pair pulling off six-month lows at the 98-handle before encountering resistance at former trendline support dating back to the August 31st lows at 98880. Key daily support rests with the 100% Fibonacci extension taken from the October 4th and November 25th crests at 9756 with a break above the 78.6% extension at 9920 negating our bias. 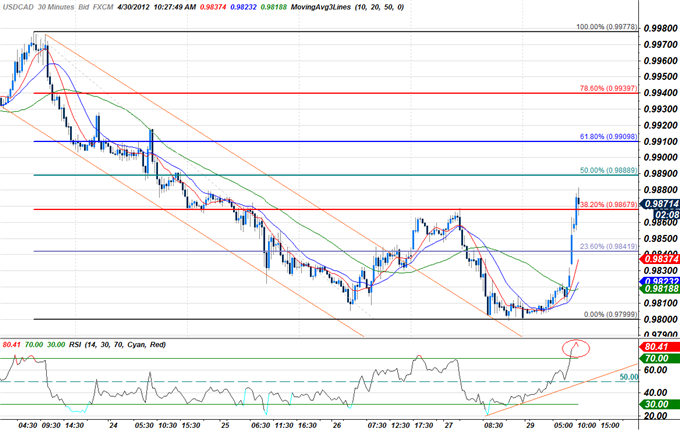 The scalp chart shows the pair trading just above the 38.2% Fibonacci retracement taken from the April 23rd decline at 9865 with topside resistance seen at the 50% retracement just shy of the 9890-mark. While the pair may continue to advance in early US trade the run-up offers fresh scalp opportunities to the downside as we maintain our bearish outlook since last week’s break below key daily trendline support. Only a breach above 9920 dispels further downside pressure with such a scenario eyeing topside resistance targets at the 78.6% retracement at 9940 and the April 23rd highs at 9978. A break back below interim support at 9865 eyes the 23.6% retracement at 9840 and the six-month lows just below the 98-figure.