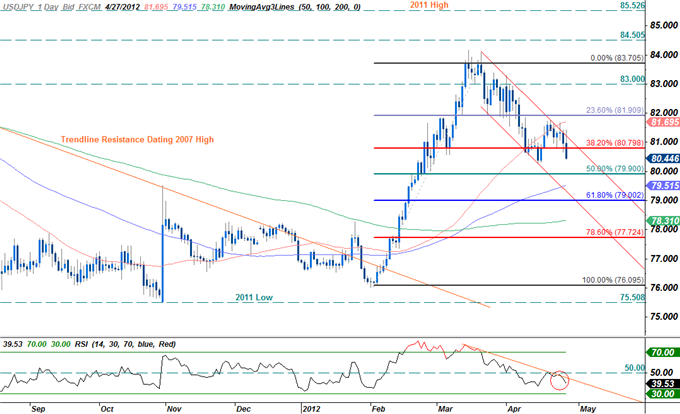 The Japanese yen is the strongest performer against a substantially weaker dollar at the close of European trade with the USDJPY off by 0.70% on the session. Although the Bank of Japan increased the size of its asset purchases by 10 trillion yen ($123 billion), the central bank also cut the amount of liquidity in the financial system by reducing the pool of funds used to extend ultra-low rate loans. The resulting 5 Trillion net increase was not enough to convince investors with yen strength persisting into the close of the week. The BoJ cited expectations for consumer prices to rise 0.7% from March 2013 to 2014 with Japan seen reaching its 1% target inflation soon after. Central Bank governor Massaki Shirakawa noted that the move aims to strengthen the “positive momentum” in the economy with the governor noting that, “it takes quite a long time for the effect of monetary easing to appear in the economy.” As officials scramble to combat deflationary pressures, the yen has continued to push higher with the low yielder outperforming all its major counterparts in early US trade.

The daily chart shows the pair continuing to trade within the confines of a flag formation off the March highs with daily support seen now seen at the 50% retracement taken from the February advance at 79.90. Daily topside resistance now stands at the 38.2% retracement at 80.80, backed closely buy channel resistance. 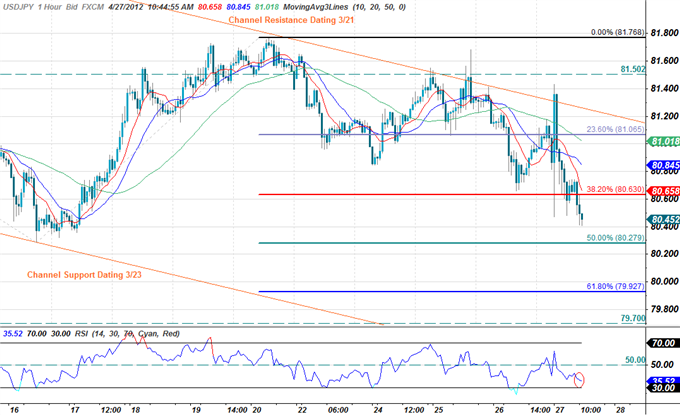 The scalp chart shows the pair holding within the confines of a descending channel formation dating back to March 21st with the pair rebounding sharply off channel resistance before finding solace around 80.40. Interim support rests with the 50% Fibonacci extension taken form the April 1st and 20th crests at 80.30 and is backed by the 61.8% extension at 79.90. (Note that this level coincides with the 50% retracement seen on the daily chart above.) A breach back above the 38.2% extension at 80.60 eyes topside targets at the confluence of channel resistance and the 23.6% extension at 81.05. In light of recent developments from the BoJ we shift our bias to neutral at these levels with only a breach above this channel formation alleviating some of the downside pressure for the pair. Note that although we continue to favor long entries below the 80-figure, deteriorating technical conditions in the dollar may keep the pair rather subdued with opportunities in other yen cross pairs likely to offer more favorable opportunities. 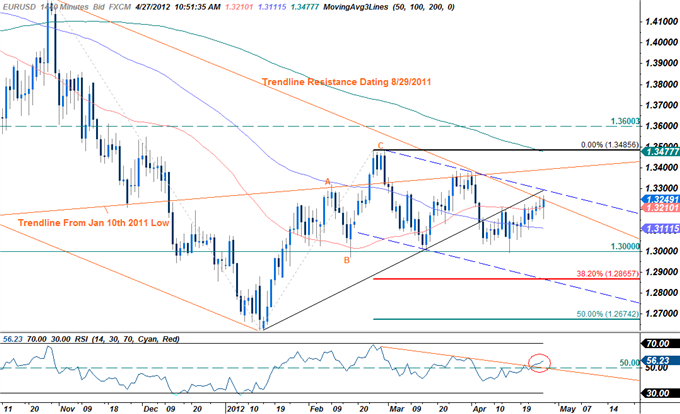 The euro is the weakest performer at noon in New York with an advance of just 0.21% despite broad based losses in the greenback. Rating agency Standard & Poor’s, downgraded Spain’s credit rating yesterday by two notches from A to BBB+ with a negative outlook as the agency cited concerns regarding the nation’s weaker-than-expected growth prospects and risks in the banking system. Although the news saw the euro come off substantially in early Asian trade, traders seemingly shrugged off the news with weakness in the dollar helping support the single currency. The EURUSD tested key channel resistance dating back to August 29th with a break above this level eyeing trendline resistance dating to the March highs (in blue), currently around 1.3380. The dollar risks substantial losses with break above this mark with such a scenario shifting our focus higher in the medium-term. Daily support now rests with the 100-day moving average at 1.3110. 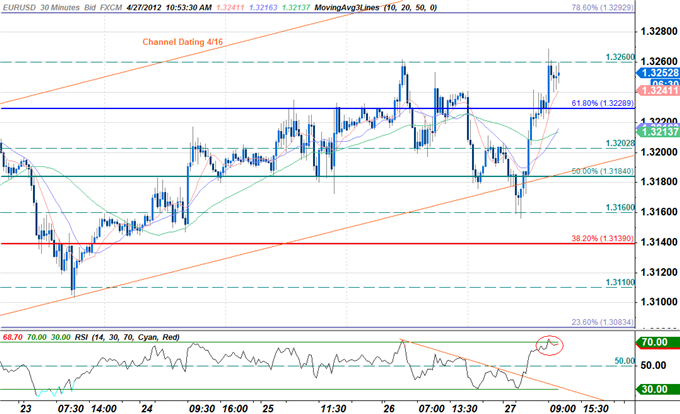 The scalp chart shows the pair continuing to trade within the confines of an ascending channel formation dating back to April 16th with the euro holding just below soft resistance at 1.3260. Subsequent ceilings are seen at the 78.6% Fibonacci extension taken from the March 14th and April 16th troughs at 1.3290, 1.3220, and channel resistance. Interim support rests with the 61.8% extension at 1.3230 backed by the figure and the 50% extension at 1.3185. A break below the overnight low at 1.3160 dispels some of the pressure on the greenback with support targets seen lower at 1.3140 and 1.3110. Note that with the close of the month approaching on Monday, we will remain on the sidelines here with the May opening range likely to offer further clarity on a directional bias.

Join Michael on Monday morning for a Live Scalping Webinar at 1230GMT (8:30ET)