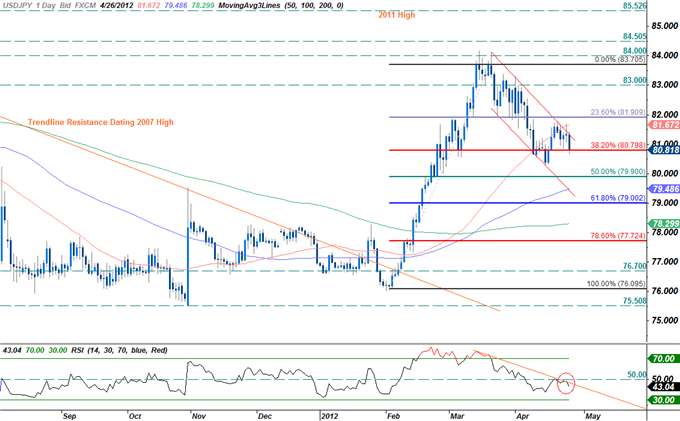 The Japanese yen is the strongest performer against a weaker dollar with the USDJPY pair off by nearly 0.70% on the session after moving a full 106% of its daily average true range. The yen is higher against all its major counterparts today as rumors circulated that the BoJ may hold off on further expanding its balance sheet at tonight’s interest rate decision despite ongoing deflationary concerns. The pair continues to trade within the confines flag formation off the March highs with daily support seen holding at the 38.2% Fibonacci retracement taken from the February advance (on a daily close basis) at 80.80. Topside resistance stands with channel resistance backed by the 23.6% retracement just shy of the 82-handle. Our long-term outlook on the yen remains weighted to the topside with only a break out of this formation offering further conviction on our directional bias. 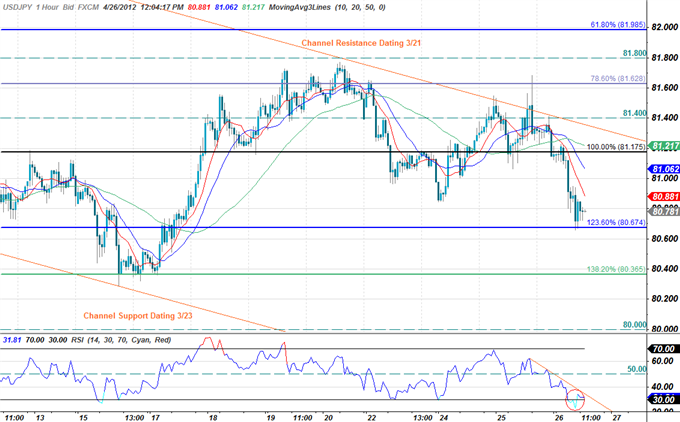 The scalp chart shows the USDJPY briefly breaking above channel resistance yesterday as volatility spiked on the heels of the FOMC rate decision with the pair breaking back below the 100% Fibonacci extension taken from the March 21st and April 1st crests at 81.20 in overnight trade. Interim support now rests at the 123.6% extension at 80.70 with subsequent floors seen at the 138.2% extension at 80.35 and the 80-handle. Topside resistance stands at 81.20 backed closely by channel resistance. A topside break shifts our focus higher with resistance targets eyed at 81.60, 81.80, and the 61.8% extension at the 82-figure. Longer-term objectives are held at the 83-handle and 83.70. 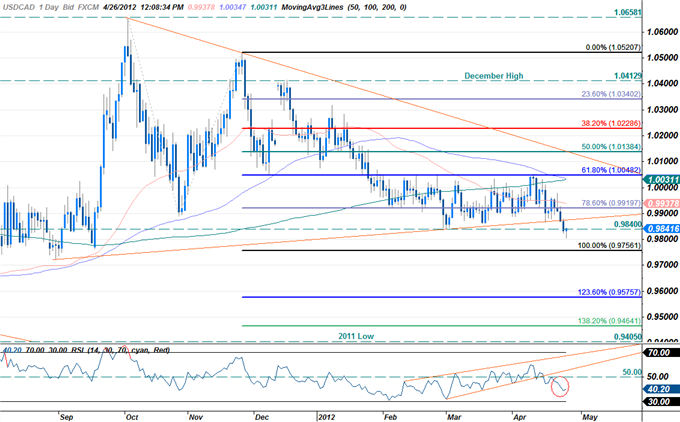 The Canadian dollar is the weakest performer in early afternoon trade with a decline of just 0.04%. Although the pair recently broke below trendline support of a triangle formation, the move has lacked conviction with the exchange rate holding at the previous yearly low at 9840. Daily support now rests at the 100% Fibonacci extension taken from the October 4th and November 25th crests at 9756. A breach back above former trendline support discredits the break with such a scenario eyeing resistance at the 78.6% extension at 9920. We remain neutral on the pair at these levels noting that a rebound off former channel support would offer further conviction on a bearish bias with our medium-term objective eyed at 9756. 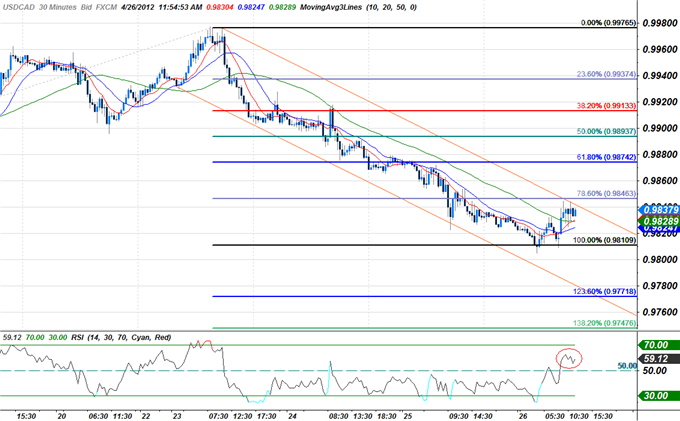 Join Michael on Friday morning for Live Coverage of the US GDP at 1230GMT (8:30ET)