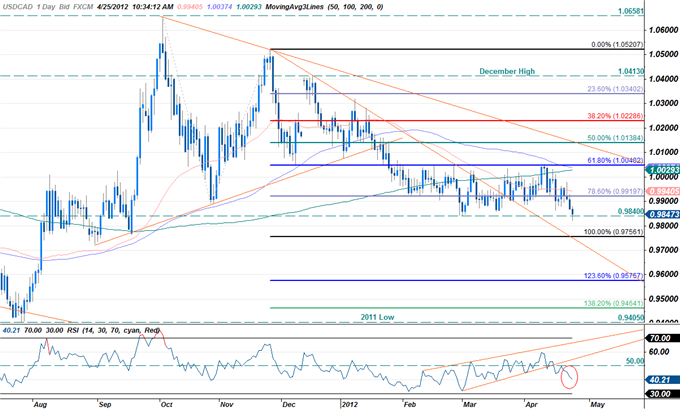 The Canadian dollar is the top performing currency against the greenback ahead of the European close with an advance of 0.23% on the session. Broader risk appetite has been well supported ahead of today’s key FOMC interest rate decision with the higher yielding commodity currencies advancing in early US trade. Remarks made by Bank of Canada Governor Mark Carney have continued to support the loonie with the head of the central bank reiterating that “higher interest rates may become appropriate.” The USDCAD briefly dipped below the 2012 lows at 9840 before pulling back soon after the open. This level remains paramount for the pair with a close below risking further dollar losses. Such a scenario eyes daily targets at the 100% Fibonacci extension taken form the October and November highs at 9756. Interim daily resistance stands at 9900. 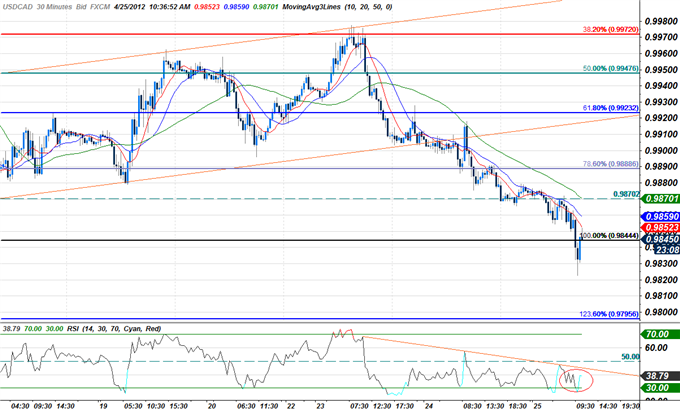 The scalp chart shows the loonie breaking below channel support yesterday with the pair remaining under pressure into the open. The 9840/45 mark is once again highlighted here with the 100% Fibonacci extension taken from the February 27th and April 10th crest, with a close below this threshold shifting our focus to the downside. Intra-day support targets are seen at the 123.6% extension at 9800 and the 138.2% extension at 9765. Topside resistance stands at 9870 backed by the 78.6% extension at 9890 and the 61.8% extension at 9920. We remain neutral on the pair at these levels with a close below 9840 offering further conviction on a directional bias. 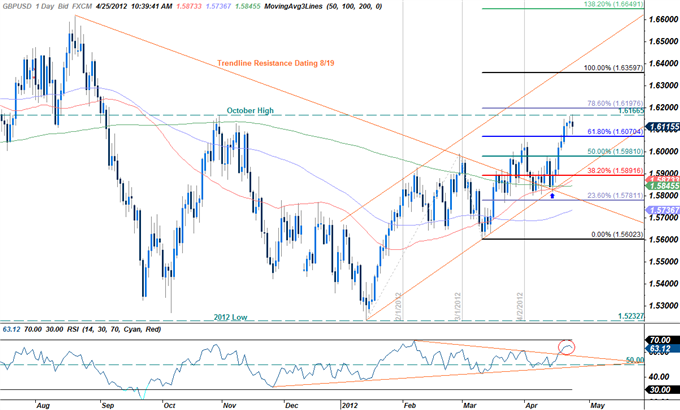 The British pound is the weakest performer in early US trade with a decline of 0.16% against the dollar. The sterling snapped a seven day winning streak that saw the pair test the October highs at 1.6165 after 1Q GDP data released earlier today showed the UK economy had contracted by 0.2% q/q. The print marks the second consecutive quarter of contraction (previous contraction of 0.3%) and officially puts the economy back in recession. Despite the data however, the pound has remained rather resilient with the exchange rate reversing course just ahead of the 61.8% Fibonacci extension taken from the January and March lows at 1.6070. The GBPUSD has continued to trade within the confines of an ascending channel formation with our bias remaining weighted to the topside so long as the 50% extension at 1.5980 is respected. 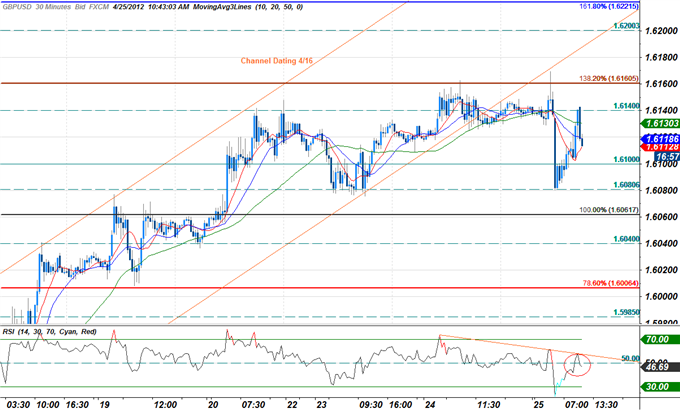 The scalp chart shows the pair breaking below an ascending channel formation dating back to April 16th with the pound plummeting in pre-market trade on the back of the GDP print. Interim resistance stands at 1.6140 backed by the 138.2% extension at 1.6160. A breach above the October highs at 1.6166 offers further conviction on our directional bias with such a scenario eyeing subsequent resistance targets at the 1.62-figure and the 161.8% extension at 1.6220. Interim support rests with the 1.61-handle backed by 1.6080 and the 100% extension at 1.6060. A break below this level risks substantial losses for the sterling with subsequent floors seen at 1.6040 and the 78.6% extension just above the 1.60-figure. Look for today’s FOMC interest rate decision to drive price action. For a complete report covering possible price targets on the back of today’s release, refer to the Trading the News Report.