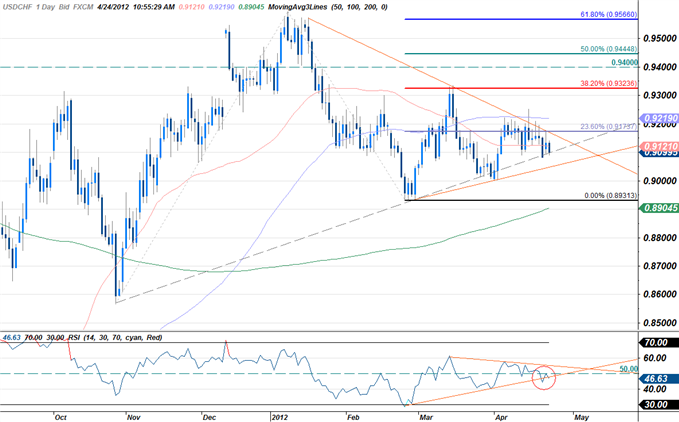 The Swiss franc is the strongest performer against a weaker greenback with an advance of 0.38% ahead of the European close. Market sentiment is well supported with equities and Treasury yields rallying on the heels of yesterday’s broad-based global risk sell-off. Stronger than expected corporate earnings and a successful bond auction in the Netherlands temporarily eased concerns regarding the deepening crisis in Europe with the euro and the Swiss franc toping the performance charts in early US trade. The USDCHF now rests at soft trendline support dating back to October 27th with daily RSI also risking a break below trendline support. Should this level be compromised, look for daily targets lower at trendline support dating back to the February lows and the February low itself at 8930. Key topside resistance stands at the confluence of trendline resistance and the 23.6% Fibonacci extension taken from the October 27th and February 24th troughs at 9175 and the April high at 9250. 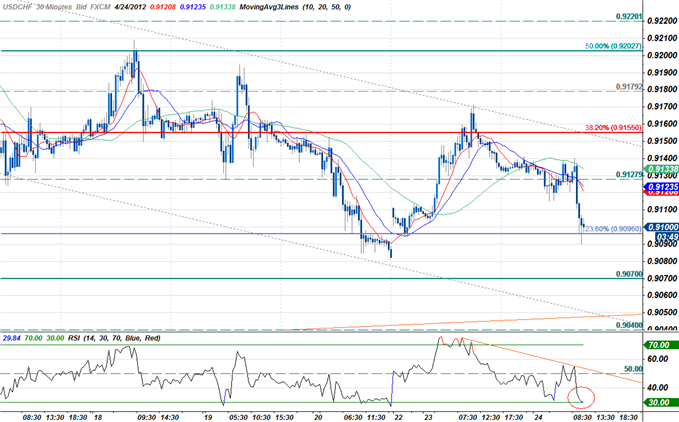 The scalp chart shows the swissie trading within the confines of a descending channel formation with the pair holding just above the 23.6% Fibonacci extension taken form the February and April lows at 9095. Stronger support rests just lower at 9070 and is backed by channel support at 9040. Interim resistance now stands at 9130 and the confluence of channel resistance and the 38.2% extension at 9155. Look for the pair to remain heavy into the close with only a break 9155 likely to alleviate some of the downside pressure for the pair. 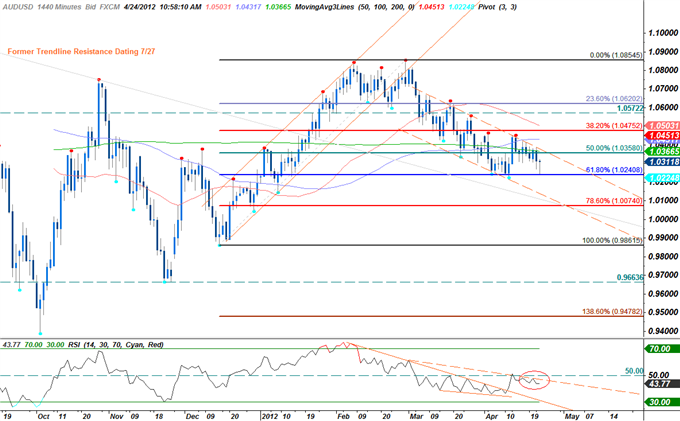 The Australian dollar is the weakest performer and is the only major trading heavy against the dollar. Weaker than expected inflation data released overnight slammed the aussie in early Asian trade with 1Q CPI coming in at 1.6% y/y, missing calls for a read of 2.2% y/y. The print comes off a previous read of 3.1% y/y and all but solidifies expectations for the RBA to cut interest rates next month with Credit Suisse overnight swaps now factoring a 132% chance of a 25basis point at the next central bank policy meeting. Twelve month expectations also fell sharply with investors now looking for 109basis points in additional cuts from the RBA. The AUDUSD pair has continued to trade within the confines of a descending channel formation dating back to March 6th with topside advances facing strong daily resistance at the confluence of the channel resistance and the 50% Fibonacci retracement taken form the December 15th advance at 1.0360. We reserve this level as our topside limit with a breach above negating our bearish medium-term bias. Key daily support rests with the 61.8% retracement at 1.0240 and this level remains our primary objective for the aussie. Note that daily RSI has remained below trendline resistance dating back to the March highs with a topside break likely to alleviate some of the downside pressure on the pair. 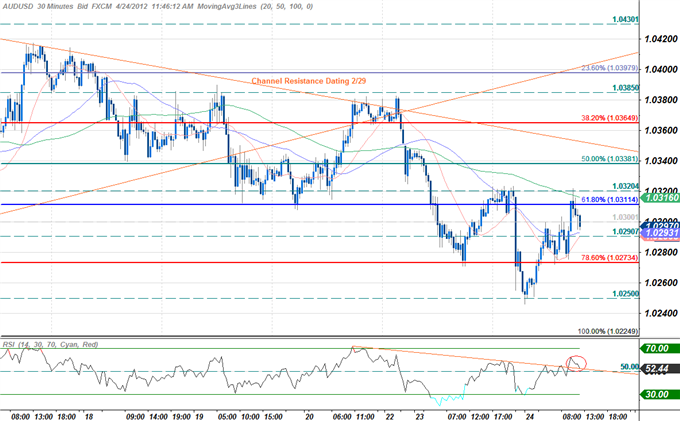 The scalp chart shows the pair breaking above RSI resistance before rebounding off the 1.0320 soft resistance target in early US trade. Interim support now rests at 1.0290 backed by the 78.6% Fibonacci retracement taken from the April 10th advance at 1.0275, and 1.0250. A break below this level exposes the April lows at 1.0225. Topside resistance stands at 1.3020 with subsequent ceilings seen at the 50% retracement at 1.0340 and trendline resistance dating back to the February highs. We continue to favor selling into aussie rallies with only a breach above the 38.2% extension at 1.0365 negating our short-term bias. For complete AUDUSD extended scalp targets, refer to last week’s Scalp Report.