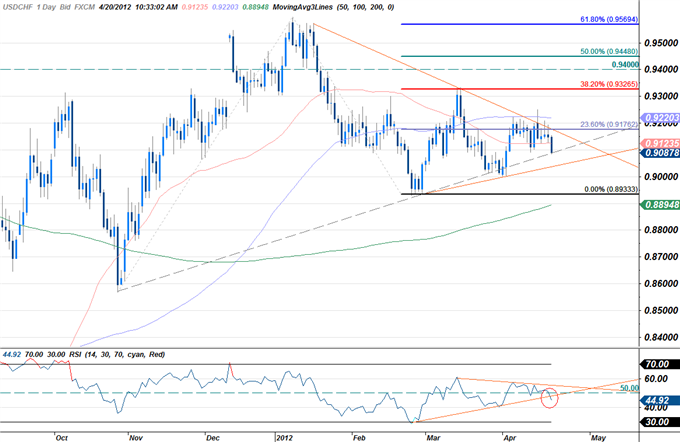 The Swiss franc is the strongest performer against a weaker greenback with an advance of 0.65% ahead of the European close. Market sentiment is well supported with equities and Treasury yields rallying on stronger than expected German confidence data and ‘robust’ earnings reports from the likes of Microsoft and GE. The dollar is weaker against all its major counterparts save the yen as traders jettisoned the low yielders in favor of risk. The USDCHF is now approaching soft trendline support dating back to October 27th with a break below daily RSI support (on a close basis) risking further losses for the greenback. Such a scenario eyes daily targets lower at trendline support dating back to the February lows and the February low itself at 8930. Key topside resistance stands at the confluence of trendline resistance and the 23.6% Fibonacci extension taken from the October 27th and February 24th troughs at 9175 and the April high at 9250. 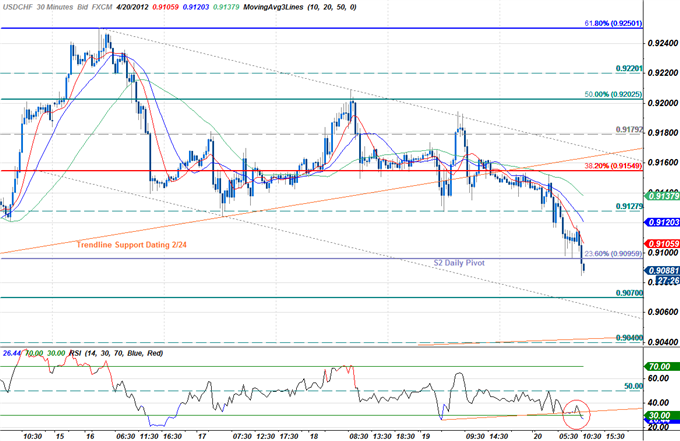 The scalp chart shows the swissie trading within the confines of a descending channel formation with the pair holding just below the confluence of the S2 daily pivot and the 23.6% Fibonacci extension taken form the February and April lows at 9095.Stronger support rests just lower at 9070 and is backed by channel support and 9040. Interim resistance now stands at 9130 and the 38.2% extension at 9155. Look for the pair to remain heavy into the close with only a break above the 92-handle negating our bias. 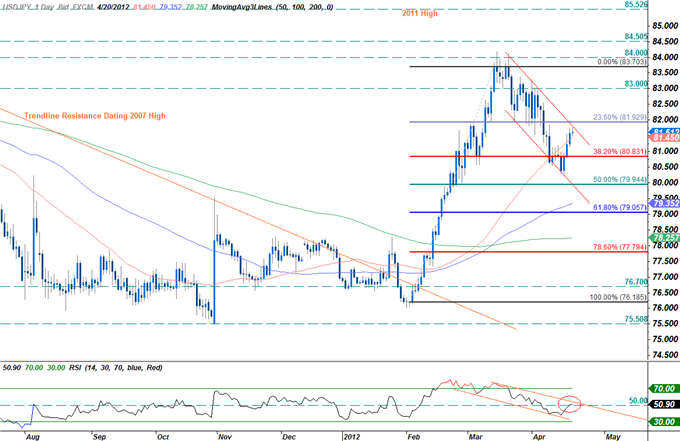 The Japanese yen is the weakest performer with a fractional loss of just 0.05% on the session after moving a meager 35% of its daily ATR. The USDJPY now stands just below channel resistance dating back to the March 21st high backed by the 23.6% Fibonacci retracement at the 82-figure. Look for RSI Resistance to hold into the close with interim daily support seen at the 38.2% retracement at 80.80. 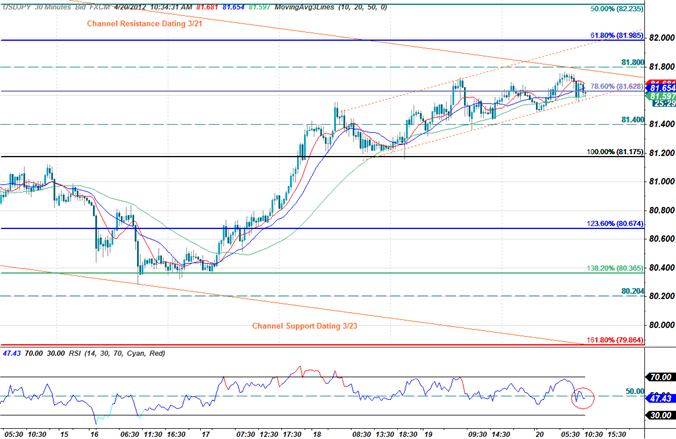 The scalp chart shows the pair continuing to straddle the 78.6% Fibonacci extension taken from the March 21st and April 1st crests at 81.63. A breach above channel resistance at 81.80 eyes subsequent topside targets at the 61.8% Fibonacci extension (82.00) and the 50% extension at 82.25. Interim support rests at 81.40 backed by the 100% extension at 81.20. A break below this level puts a bearish tone on the dollar with such a scenario eying targets at 80.67 and the 138.2% extension at 80.37. Our medium-term bias on the pair remains weighted to the topside with only a break below 81.20 putting us on the sidelines.