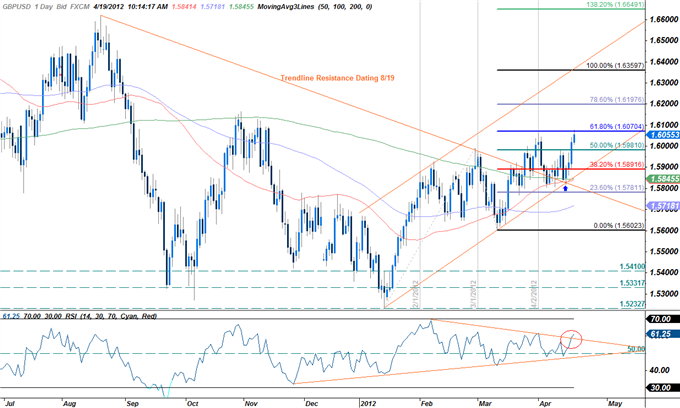 The British pound is the top performing currency for a second consecutive day with the GBP/USD advancing 0.16% in early US trade. Remarks made by Bank of England board member Adam Posen further supported the sterling’s advance as he struck a more hawkish tone for future policy. Posen cited concerns over stickiness in the core rate of inflation, noting that the MPC is taking the resilience in underlying price growth ‘very seriously’. The comments set the stage for the BoE to start normalizing monetary policy with the sterling likely to remain well supported. The pair has continued to trade within the confines of an ascending channel formation dating back to the 2012-lows with the exchange rate now testing critical resistance at the key 61.8% Fibonacci extension taken from the January 13th and March 12th troughs at 1.6070. Note that RSI has now broken above trendline resistance and offers further conviction on our directional bias. 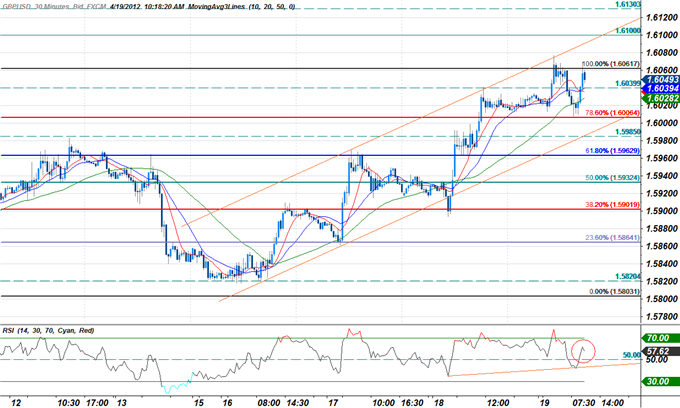 The scalp chart shows the sterling trading within the confines of a short-term ascending channel formation dating back to the April 16th with the pair testing interim resistance at the 100% Fibonacci retracement taken form the April 2nd decline at 1.6062. A breach above this level eyes targets at the 1.61-handle backed by channel resistance and 1.6030. Interim support rests at 1.6040 with subsequent floors seen at the 78.6% retracement at the 1.60-figure, and 1.5985. A break below the 61.8% retracement at negates our short-term bias with such a scenario eyeing support targets at 1.5930 and the 1.59-handle. Look for the pair to remain well supported with a break above the 100% extension risking further losses for the greenback. 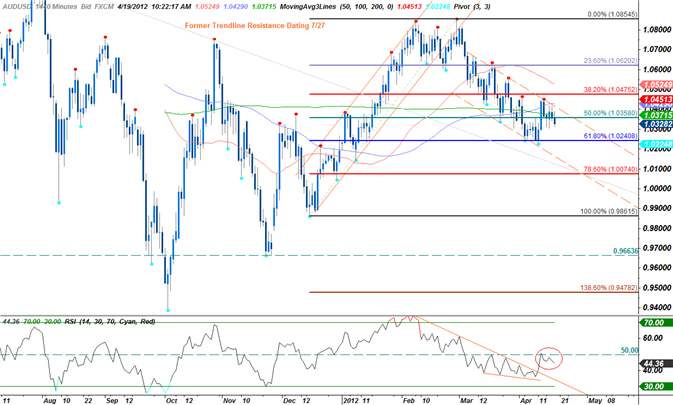 The Australian dollar is the weakest performer ahead of the European close with a loss of more than 0.38% on the session. The aussie has remained within the confines of a descending channel formation dating back to the February highs with the pair breaking below the 50% Fibonacci retracement taken form the December 15th advance at 1.0360. We continue to eye our initial objective at the 61.8% retracement at 1.0240 with daily topside resistance eyed at the 200-day moving average at 1.0370 and he confluence of channel resistance and the 100-day moving average at 1.0430. 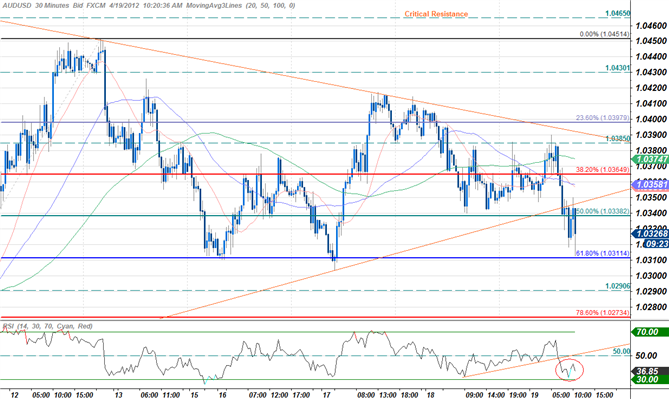 The scalp chart shows the aussie breaking below trendline support in pre-market trade before rebounding just ahead of the 61.8% Fibonacci retracement taken from the April 10th advance at 1.0311. Subsequent support targets are eyed at 1.0290 and the 78.6% retracement at 1.0273. Topside resistance now stands at the 50% retracement at 1.0340 backed by the 38.2% retracement at 1.0365. We continue to favor selling into aussie rally’s so long as the April high at 1.0465 is respected. For complete aussie scalp targets and the key threshold grid refer to this week’s Scalp Report.