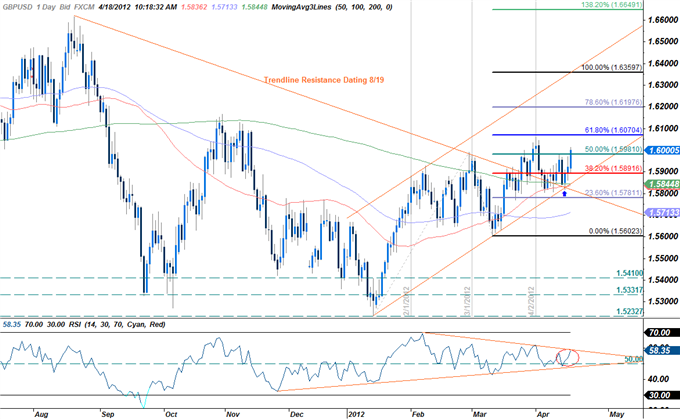 The British pound is the top performing currency against the dollar in early US trade with an advance of 0.51% on the session after moving nearly 113% of its daily average true range. Minutes from the latest Bank of England policy meeting showed the MPC voting 8-1 to keep the asset purchase program at £325B with the central bank scaling back its dovish rhetoric amid the stickiness in inflation. The sterling rallied sharply as expectations for further easing subsided with the exchange rate breaking back above the 50% Fibonacci extension taken form the January 13th and March 12th troughs at 1.5980. The pair has continued to trade within the confines of a broad ascending channel formation after pounding rebounding off of the near three-way confluence of the 50 & 200 moving averages and channel support at 1.5820. Topside daily objectives are eyed at the 2012 highs just below the 61.8% Fibonacci extension at 1.6070. Note that an RSI break above trendline resistance is likely to confirm the breach with such a scenario offering further conviction on our directional bias. 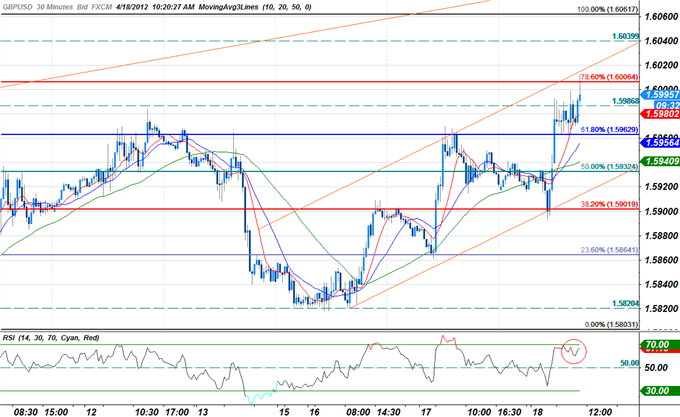 The scalp chart shows the sterling trading within the confines of a short-term ascending channel formation with the pound encountering resistance at the 78.6% Fibonacci retracement taken from the April 2nd decline at the 1.60-figure. A likely topside break here eyes subsequent resistance targets at 1.6040 and the 100% retracement at 1.6060. Interim support now rests with the 61.8% retracement at 1.5963 backed by 1.5930 and the 38.2% retracement at the 1.59-handle. Look for the pair to remain well supported with a break above the 100% extension risking further losses for the greenback. 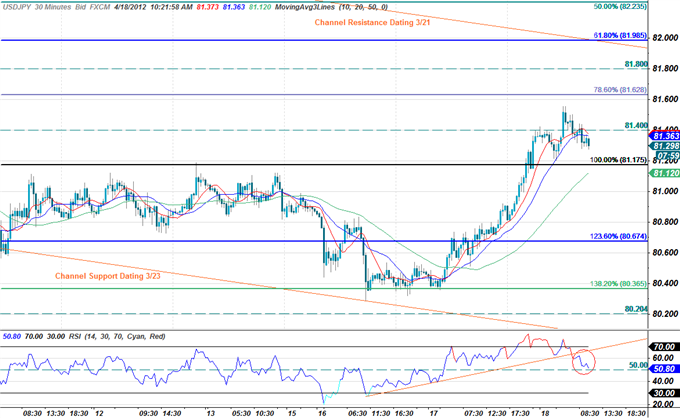 The Japanese yen is the weakest performer with a loss of 0.55% on the session. Broader risk assets remain on the defensive with risk aversion flows continuing to favor the greenback over the yen. The USD/JPY broke back above the 100% Fibonacci extension taken from the March 21st and April 1st crests at 81.18 before encountering soft resistance at 81.40. Subsequent topside targets are seen at the 78.6% extension at 81.63 backed by 81.80 and the confluence of channel resistance and the key 61.8% extension at the 82-handle. A breach above this level suggests that the correction may have run its course with such a scenario eyeing targets at 82.25 and the 38.2% extension at 82.50. Interim support rests at 81.18 with subsequent floors seen at 80.67 and the 138.2% extension at 80.36. Note that RSI recently broke below trendline support with the pullback offering favorable long positioning.