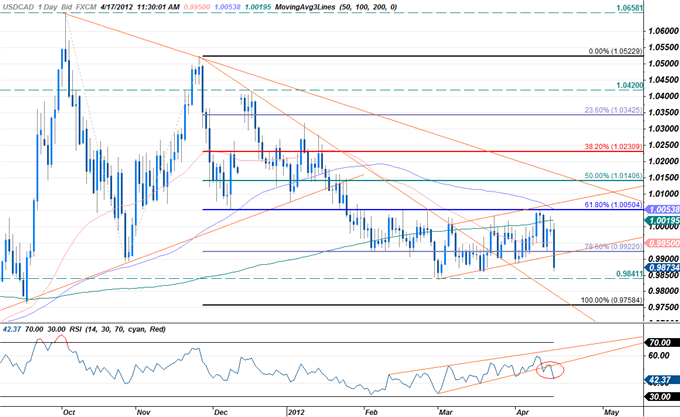 The Canadian dollar is the strongest performer against a weaker US dollar at the close of European trade with an advance of 1.20% on the session. Although the Bank of Canada held rates at 1.00% as expected, the accompanying policy statement fueled a massive rally in the loonie with the USD/CAD breaking below daily support at the 78.6% Fibonacci extension taken from the October 4th and November 25th crests at 9920. Governor Mark Carney cited that while household debt remains the most significant domestic risk, removing stimulus ‘may become appropriate’ as conditions warrant. The remarks come as the central bank raised its 2012 growth forecast to 2.4% from 2% while citing that it expects the Canadian economy to reach full capacity by mid-2013. The rather hawkish comments prompted a substantial rally in the loonie with the USD/CAD now eyeing critical support at the 2012-lows at 9841. 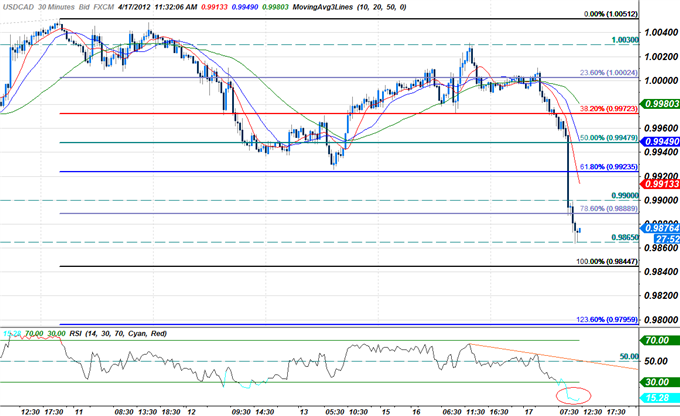 The scalp chart attests to the magnitude of today’s decline with the pair now resting above soft support at 9865. With RSI at an extreme low of 15.28, look for the loonie to pare a portion of this decline with a rebound off this level likely to offer favorable short entries. Interim resistance now stands with the 78.6% Fibonacci extension at 9890 backed closely by the 9900-handle and the 61.8% extension at 9925. We remain neutral on the pair head of tomorrow’s BoC Monetary Policy report where we will see if the Governor Carney will further reiterates the hawkish remarks cited today. Should the report show a growing shift from the central bank to begin normalizing policy, look for the loonie’s advance to gather pace with a break below interim support eyeing the 100% extension at 9845, 9800, and the 138.2% extension at 9765. 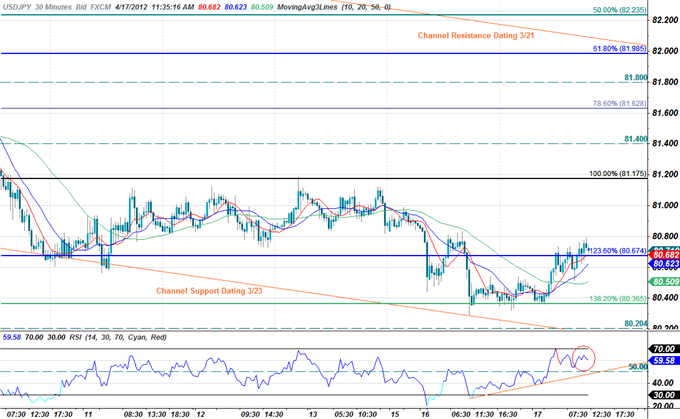 The Japanese yen is the weakest performer at noon in New York with the USDJPY advancing 0.41% on the session. The yen is back on the defensive today despite broad-based dollar losses as risk appetite dramatically rebounded after a successful Spanish bond auction. As noted in previous reports, risk-off flows have continued to see yen losses out-pace that of the greenback with the pair currently trading just above the 123.6% Fibonacci extension taken from the March 21st and April 1st crests at 80.67. Topside resistance targets are eyed at the 100% extension at 81.17, 81.40, and the 78.6% extension at 81.60. A break back below interim support eyes subsequent floors at the 138.2% extension at 80.35, 80.20, and channel support dating back to March 23rd. We maintain our longer-term bullish bias on the pair with moves nearing the 80-figure offering favorable long entries.