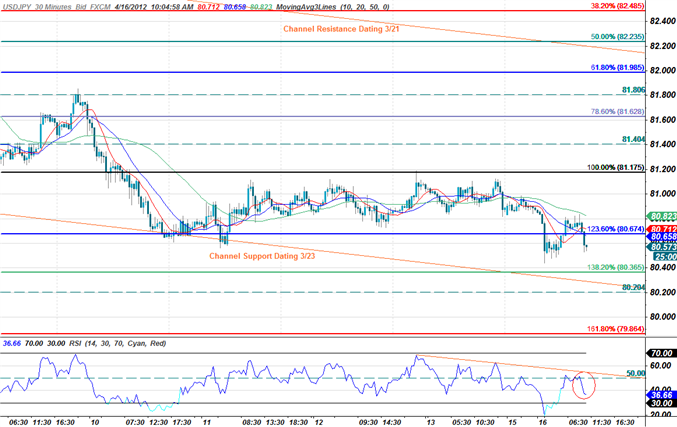 The Japanese yen is the strongest performer against a broadly firmer greenback ahead of the European close with an advance of 0.38% on the session. Economic data out of the US saw equity markets pare early gains with a slight shift into risk aversion propping up the low yielding yen as traders continue to eye rising yields on Spanish debt, rekindling contagion fears. Although March advanced retail sales came in stronger than expected with a print of 0.8%, weaker than expected prints on the April Empire manufacturing report which hit its lowest level since November, and the NAHB housing market index which hit its lowest level since January, saw broader market sentiment go back on the defensive.

The USDJPY has continued to trade within the confines of a descending channel formation dating back to late March with the pair now eying interim support at the 138.2% Fibonacci extension taken from the March 21st and April 1st crests at 80.35. A break below this level threatens channel support with subsequent floors seen lower at the 161.8% extension at 79.86 and 79.60. Interim topside resistance stands with the 123.6% extension at 80.67 backed by the 100% extension at 81.17 and 81.40. Look for the pair to remain under pressure with only a breach above the 81.80 pivot dispelling further downside pressure. With the BoJ pledging to maintain its easing cycle, policy makers are likely to continue talking down the yen with our longer-term outlook remaining weighted to the topside. Only a break below the 80-figure negates our directional bias. 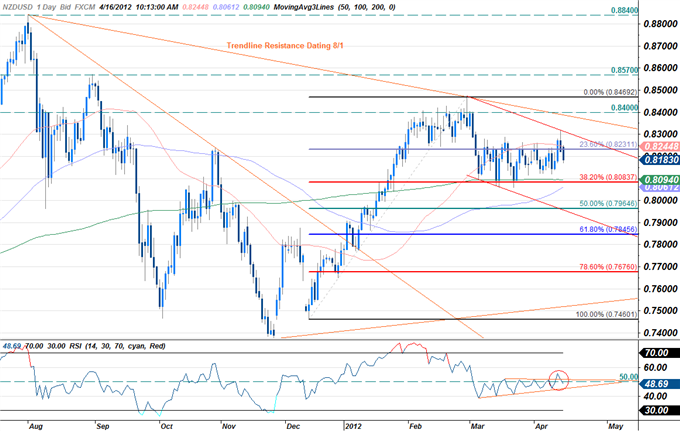 The New Zealand dollar is the weakest performer among the majors with a loss of 0.39% in early US trade. The kiwi made a key reversal on Friday which we define based on three criteria: a fresh 20-day high, a daily range as large as the 20-day ATR and a close below the previous day’s close. The daily chart shows the pair briefly breaching above the 23.6% Fibonacci retracement before sharply reversing with the kiwi now poised for a test of the confluence of the 38.2% retracement and the 200-day moving average just below the 81-handle. This level remains paramount for the kiwi with a break below eying daily targets at the 100-day moving average at 8060 and the 50% retracement at 7965. Key daily topside resistance now stands with channel resistance dating back to the 2012-highs at 8317. 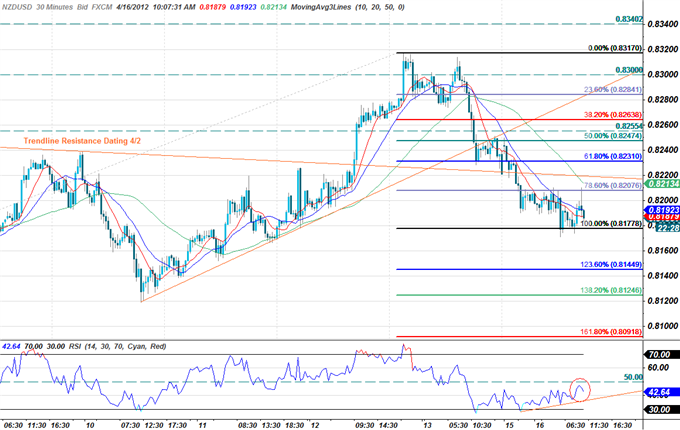 The scalp chart shows the pair encountering support at the 100% Fibonacci extension taken from the April 2nd and 12th crests at 8177 with a break here eyeing subsequent floors at the 123.6% extension at 8150 and the 138.2% extension at 8125. Topside resistance stands with the 78.6% extension just above the 82-figure backed by the key 61.8% extension at 8230 and 8250. We continue to favor the short side on the kiwi with a break below last week’s low at 8120 offering further conviction on our directional bias.