The Japanese yen is the strongest performing currency against a markedly firmer greenback in early US trade with USD/JPY off by a mere 0.03% on the session. Weaker than expected GDP data out of China in overnight trade continues to weigh on broader market sentimen with European equity markets plummeting by 1.2%-2.4% across the baord. Whisper numbers for a print of 9% were grossly over-estimates with Chineses GDP coming in at just 8.1%, missing consensus esitmates for a print of 8.4%. Economic data out of the US today added further downside pressure to risk assets with the March core CPI coming in at 2.3% missing calls for a read of 2.2%. Continued stickiness in core prices will limit the Fed’s scope to embark on further easing measures as price growth remains above the 2% target set forth by the central bank in January. The April University of Michigan confidence survey also missed estimates with a print of 75.7, down from a previous print of 76.2. US equities are on the defensive at the close of European trade with the major stock indices down by 0.7-1.15%.

The USD/JPY has continud to trade sideways over the past few sessions with the exchange rate holding within the confines of a descending channel formation dating back to late March. Interim support rests with the 123.6% Fibonacci extension taken from the March 21st and April 1st crests at 80.65 backed by the confluence of the 138.2% extension and channel suport at 80.35. Topside resistance stands with the 100% extension at 81.18 with subsequent resistance targets eyed at 81.40, the 78.6% extension at 81.60, and 81.80. A breach abvoe the 61.8% extension at the 82-figure alleviates some of the pressure on the dollar with such a scenario eyeing targets at 82.25 and the 38.2% extension at 82.50. Look for the pair to remain rangebound into th close as risk-off flows continue to support both the greenback and the yen, with our long-term outlook still weighted to the topside. The Swiss franc is the weakest performer with the a loss of 0.95% on the session. The franc has come under substantial pressure as declines in the euro have continued to weigh on the swissie. The daily chart shows the pair breaking above the 23.6% Fibonacci extension taken from the October 27th and February 24th troughs at 9175 before making a run at trendline resistance dating back to the January 17th high. Note that RSI continues to consolidate into the apex of a wedge formation with a topside break likely to fuel the pair with enough momentum to breach the 100-day moving average which sits just higher at 9224. 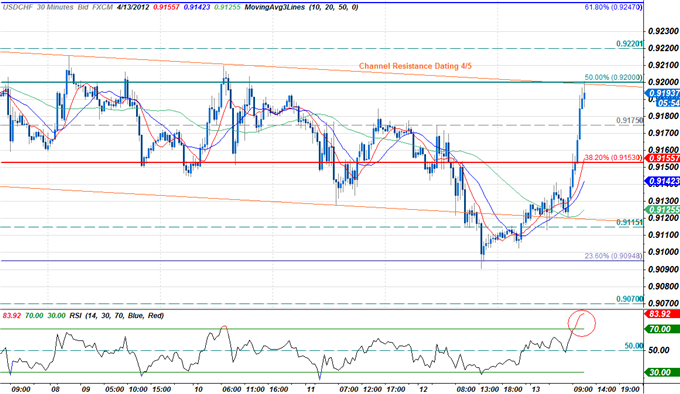 The scalp chart shows the pair encountering resistance at the confluence of the 50% Fibonacci extension a taken from the February 29th and April 2nd troughs and channel resistance at the 92-handle. While we expect this level to hold for now, a topside breach risks further losses for the franc with subsequent resistance targets seen at 9920 and the 61.8% extension at 9250. Soft interim support rests at 9175 backed by the 38.2% extension at 9150 and the 23.6% extension just below the 91-figure. While we continued favor the topside in the pair it’s important to note that the move will remain contingent on losses in the euro as the SNB maintains its pledge to defend the 1.20 EUR/CHF peg.