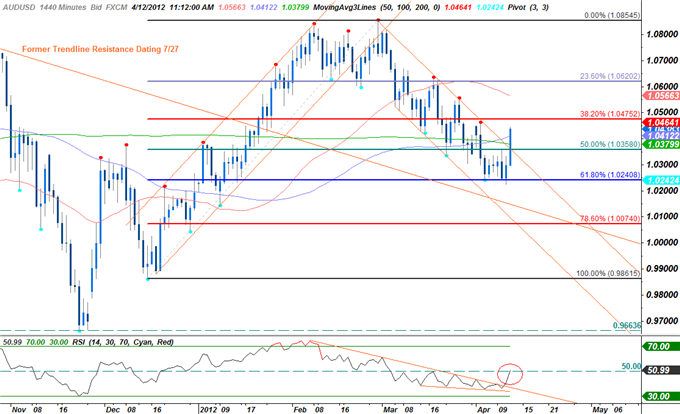 The Australian dollar is the top perfromer against a weaker greenback with a massive advance of more than 1.38% on the session. Stronger than exepcted employment data out of Australia last night prompted a sharp rally in the aussie after the report showed the economy had created 44K jobs in the month of March, up from a previous decline of 15.4K. Expetations were for a print of just 6.5% with the unemployment rate also topping expectations with a hold at 5.2% vs consensus calls for a read of 5.3%. The daily chart attests to the sheer magnitude of the day’s advance with the pair clearing critical resistance at the confluence of channel resistance and the 50% Fibonacci retracement taken from the December 15th advance at 1.0360. Subsequent topside targets have also been compromised at the 200 and 100-day moving averagest at 1.0380 and 1.0410 respectively. Note that the breach above RSI resistance confirmed the break with the aussie likely to see further topside moves before heading lower. 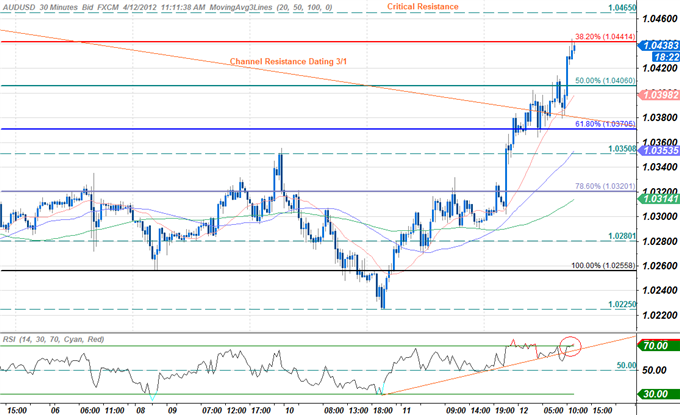 The scalp chart shows the pair breaching aboe channel resistance dating back to March 1st before ecnountering resistance at the 38.2% Fibonacci extension taken from the March 19th and 27th crests at 1.0440. A breach above the monthly high at 1.0465 risks substantial dollar losses with such a scenario eyeing topside targets at the 23.6% extension at 1.0485, 1.0525 and the March 27th high at 1.0550. Interim support now rests with the 50% extension at 1.0405 backed by key support at the 61.8% extension at 1.0370. A break below this level puts a bearish tone back on the aussie with a close below targeting subsequent support levels. Look for the advance to taper off into the close of US trade with a continued rally in higher yielding assets likely to keep the aussie well supported in the interim. 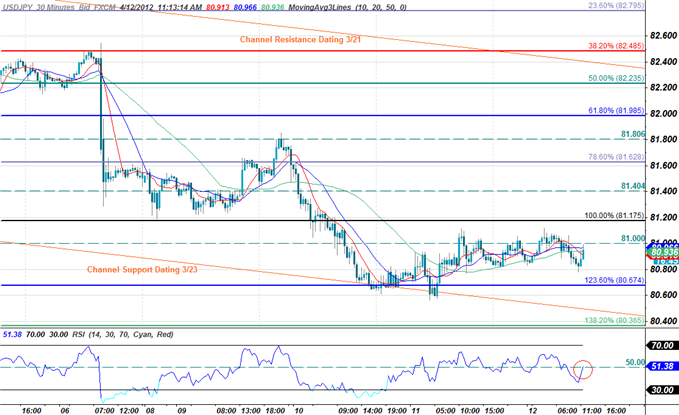 The Japanese yen is the weakest performer against the dollar with the pair advancing just 0.11% on the session despite broad-based dollar losses. The pair has continued to trade within the confines of a descending channel formation dating back to March 21st with interim support holding at the 123.6% Fibonacci extension taken from the March 21st and April 1st crests at 80.67 backed by channel support and the 138.2% extension at 80.37.Topside resistance targets are held at the 100% extension at 81.20, 81.40, and the 78.6% extension at 81.63. A breach above the 61.8% extension at the 82-handle would alleviate some of the downward pressure on the pair with such a scenario challenging channel resistance, currently just above the 50% extension at 82.25.Bottom line- look for price action to signal the completion of the correction with a breach above channel resistance offering further conviction on our bullish directional bias.