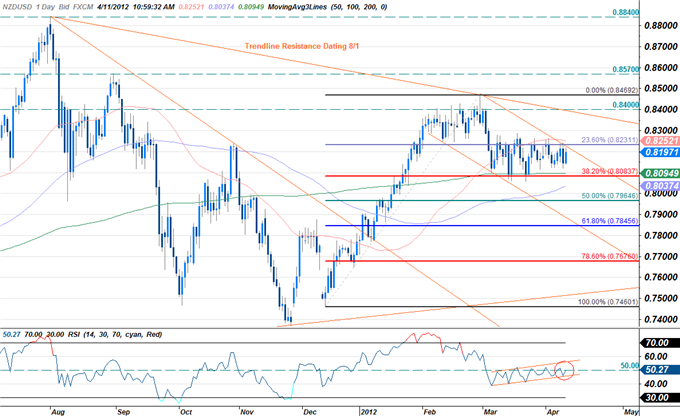 The New Zealand dollar is the top performer against a weaker greenback in early US trade with an advance of 0.71% on the session. The kiwi has remained range bound for over a month now with key daily resistance eyed at the confluence of channel resistance and the 23.6% Fibonacci retracement taken from the December 15th advance at 8230 backed closely by the 50-day moving average at 8250. Strong daily support rests with the confluence of the 200-day moving average and the 38.2% retracement at 8085. We remain neutral at these levels pending a break out of the current range while noting that our long-term outlook remains weighted to the downside. 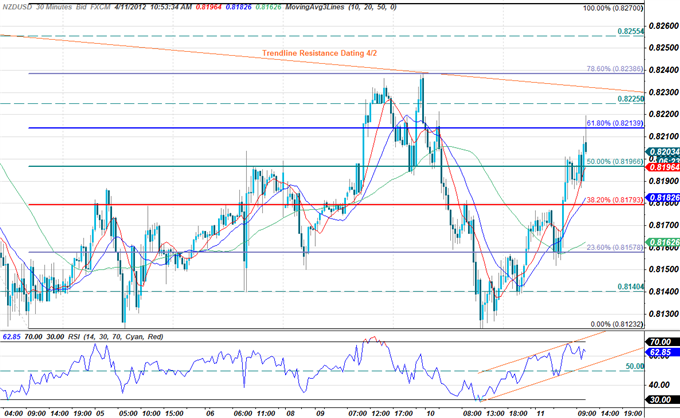 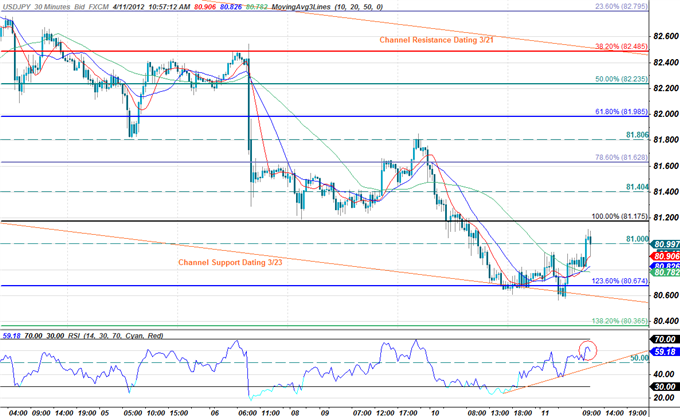 The Japanese yen is the weakest performer against the dollar with the pair advancing more than 0.30% in early trade. The USD/JPY rebounded off channel support dating back to March 23rd in overnight trade before stalling around the 81-handle. While the correction in the yen has been larger than anticipated, we maintain our long-term bullish bias with the recent pullback offering favorable long entries. The pair has continued to trade within the confines of a descending channel formation dating back to March 21st with interim support eyed at the 123.6% Fibonacci extension taken from the March 21st and April 1st crests at 80.67 backed by channel support and the 138.2% extension at 80.37. Topside resistance targets are held at the 100% extension at 81.20, 81.40, and the 78.6% extension at 81.63. A breach above the 82-handle would alleviate some of the downward pressure on the pair with such a scenario challenging channel resistance, currently around the 38.2% extension at 82.50. Bottom line- look for price action to signal the completion of the correction with a breach above channel resistance offering further conviction on our directional bias.