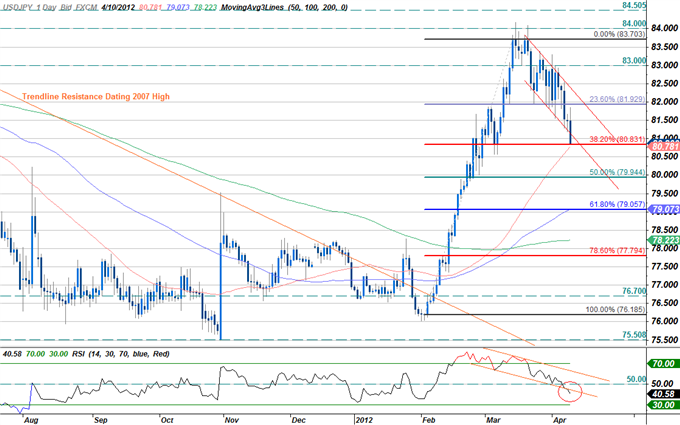 The Japanese yen is the top performer against a stronger dollar with the USD/JPY off by more than 0.70% at the close of European trade. The BoJ announced no change to policy at last night’s interest rate decision and despite ongoing concerns about deflationary pressures the central bank remained steadfast. The yen surged on the news with the low yielder advancing against all its major counterparts early in the session. A daily chart of the pair shows the exchange rate breaking below channel support before encountering the 38.2% Fibonacci retracement of the February 3rd advance at 80.83. This level is backed closely by the 50-day moving average at 80.78 and if compromised may see the yen correction gather pace with daily support seen lower at the 80-handle. Note that our medium to long-term bias on the USD/JPY remains weighted to the topside with decline offering favorable long entries. 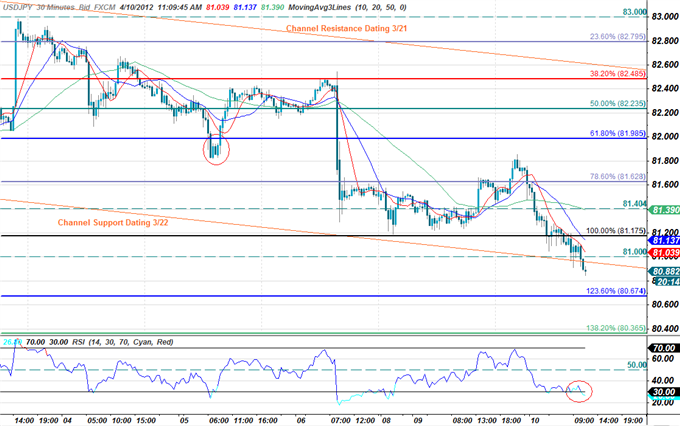 The scalp chart shows the pair testing short-term channel support dating back to March 22nd after breaking below the 100% Fibonacci extension taken from the March 21st and April 1st crests at 81.20. Note that the move has lacked significant follow through and the possibility of this being a false break grows increasingly likely as price action holds this level. Interim support targets are seen at the 123.6% extension at 80.67 backed by the 138.2% extension at 80.35. Note that a break below the 80.67 negates our bias with such a scenario eyeing subsequent support targets. Topside resistance stands at the 81-figure backed by 81.20, 81.40, and the 78.6% extension at 81.62. 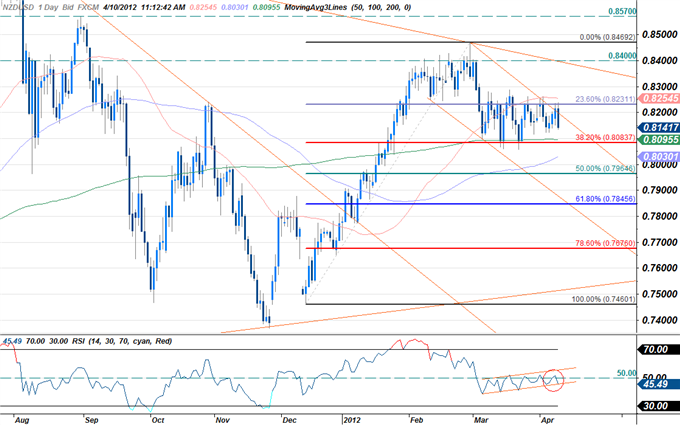 The New Zealand dollar is the weakest performer against the greenback with the pair off by more than 0.80% on the session. Weakness in European markets, which just reacted to Friday’s NFP print today, have weighed on broader market sentiment with high yielding, growth linked assets coming under substantial pressure. The daily chart shows the kiwi rebounding off channel resistance dating back to the February high with key daily support seen at the confluence of the 38.2% Fibonacci retracement taken form the December advance and the 200-day moving average just below the 81-handle. A break here risks substantial losses for the kiwi with such a scenario offering further conviction on our directional bias. Only a break above the 23.6% retracement at 8230 would negate our bearish bias. 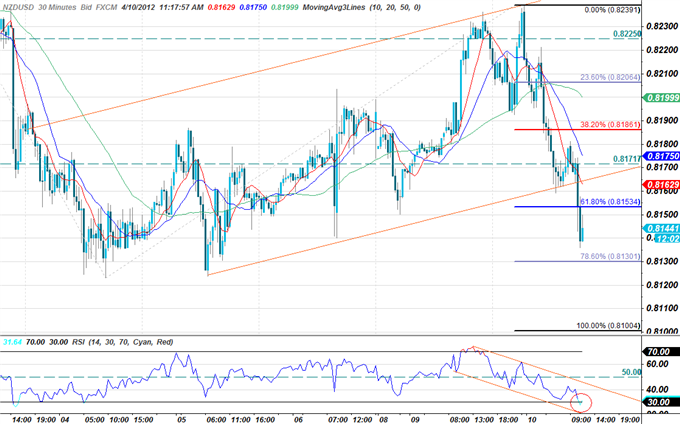 The scalp charts shows the kiwi breaking below short-term channel support before consolidating just ahead of the 78.6% Fibonacci extension taken from the April 2nd and overnight highs at 8130. Interim support rests here with a break below eyeing subsequent support targets at 100% extension at the 81-figure and the 123.6% extension at 8070. Interim resistance stands with the 61.8% extension at 8150 backed by 8170 and the 38.2% extension at 8186.